I wrapped up my 4th annual 100 Day Project last month and I gotta say, I was pretty damn pleased with myself with this one!  If you need a little refresher, I decided to do food illustrations this year – namely doing one illustration for each letter of the alphabet.

This was an entirely new genre for me – new tools, new subject, new style of illustration… and with this 100 Day Project I could see a definite progression in my abilities and skills from Day 1 to Day 100, which was immensely satisfying, I gotta tell ya! I didn’t notice it day to day but looking back on them all… woah! 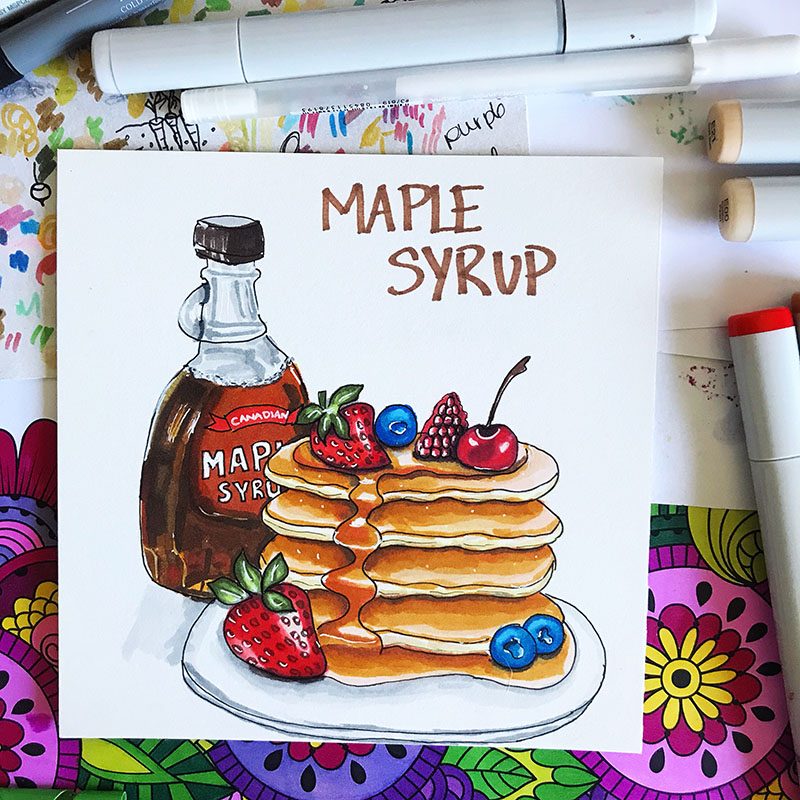 It really reinforced to me (again!) how very important it is to practice.  It’s boring sometimes, and it’s easy to make excuses not to do it and it can be incredibly frustrating but wow… even just 100 days can make such a massive difference in your skill level if you stick to it1

I also took a more chilled out approach to this year’s challenge.  I gave myself space to take my time rather than complete one finished art piece per day.  I only did 26 (you can see them all here) and while I did work on them every day, I didn’t put a ton of pressure on myself to go faster, which was nice while learning something that was so different for me. 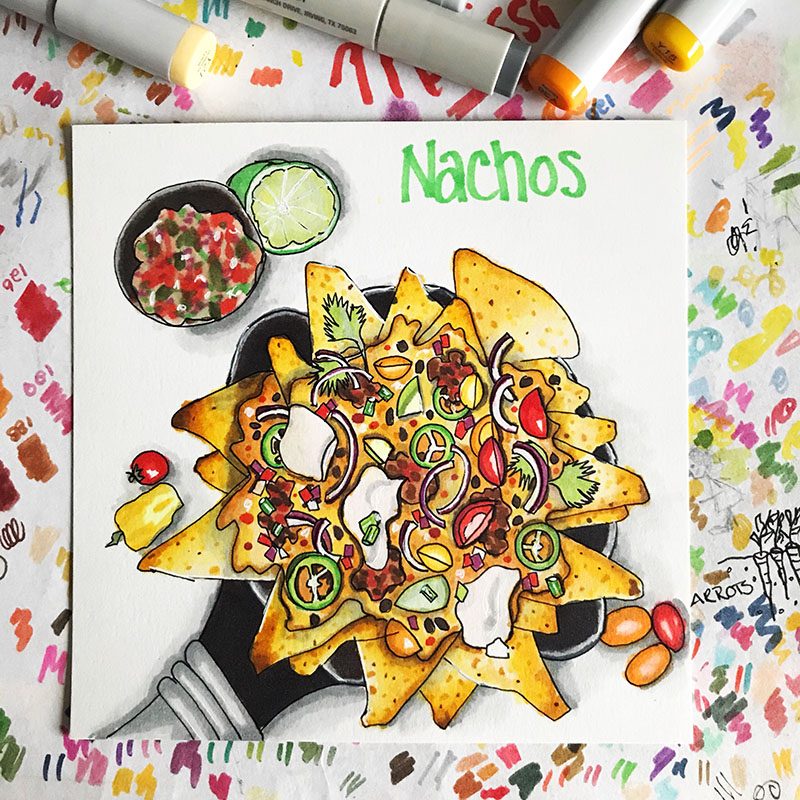 I also had a ball with this on social media – Instagram in particular.  Coming up with a different food for every letter was a challenge – sometimes the possibilities were endless and sometimes it felt like there was nothing! I used Instagram a lot to solicit suggestions and boy, did people ever get creative! (thanks to everyone who sent me comments and suggestions even if they didn’t get used! I have loads of ideas for future drawings.) 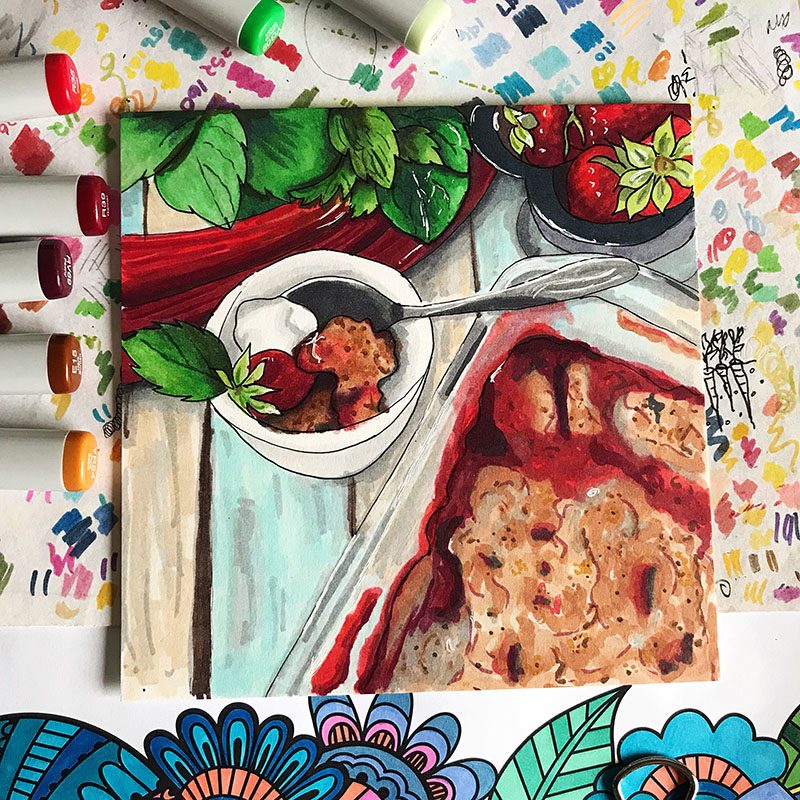 Once I had it narrowed down to two items that I thought were interesting to draw, were achievable given my skill level and that I had marker colours for (YES… this was a big factor in what I chose – especially in the beginning when my marker collection was very, very tiny!), I would use IG’s story poll feature and get everyone to vote.  And I was so surprised by how many people voted! It was so fun to see everyone get into it! Of course, polling meant that more often than not, I wound up drawing my second choice rather than my first but it didn’t matter, that just made it more fun and, sometimes, more challenging!

I also loved all the positive feedback and hearing how much the drawings brightened people’s day, which frankly makes the whole thing completely worthwhile.  I draw for two reasons – to make me happy and to make others happy.  So, mission accomplished. 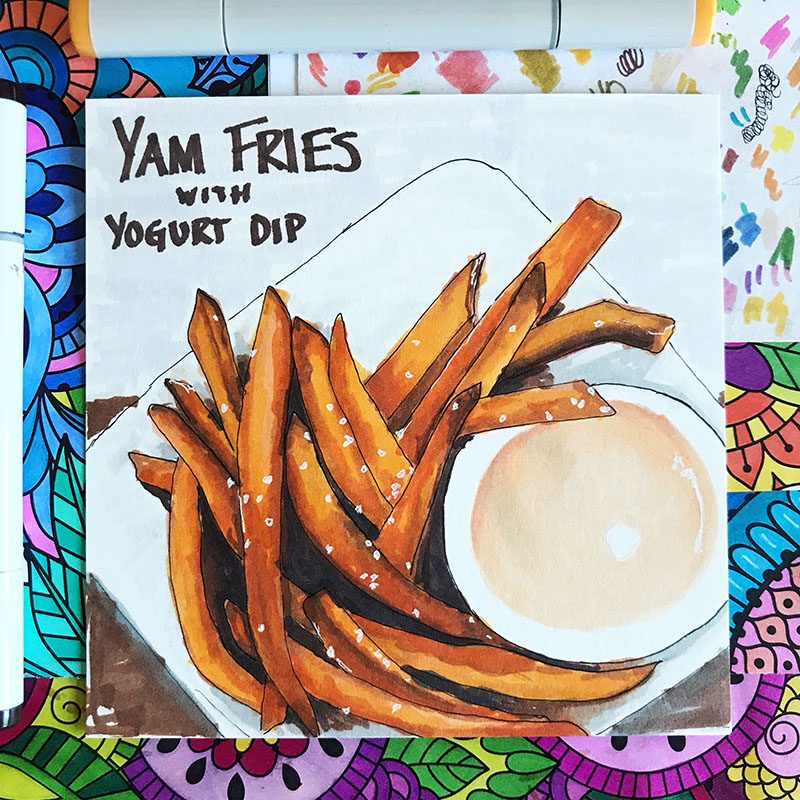 I also loved all the questions I got and I’ll answer the biggest one I got in my next post!

I have all 26 food illustrations hanging in my office for the time being.  After the summer is over and the Great Canadian Road Trip that I’m doing in September has wrapped up, I’ll take them down and scan them all in to my computer for other projects I have in mind.  A few will get packaged up and mailed to people whose original food photos I used as inspiration and who have asked for copies.  I might sell the rest as a fundraiser for my local pet shelter or something like that.  Is that something people would be interested in?

For now though, it’s time for a well deserved break and just doodling for fun and stress release from work (which I need! Yikes!).

2shares
How Going Carless For a Month Changed How I Consume.
My Copic Marker Food Illustration Tools