Every year I pick a word of the year.  For 2018 I chose “consumption” in an effort to be more mindful of how and what I consume.  From food to clothes to transportation to movies and music and everything in between, my goal in 2018 is to be a more conscious consumer. I regularly post updates on my progress into the land of consumerism! 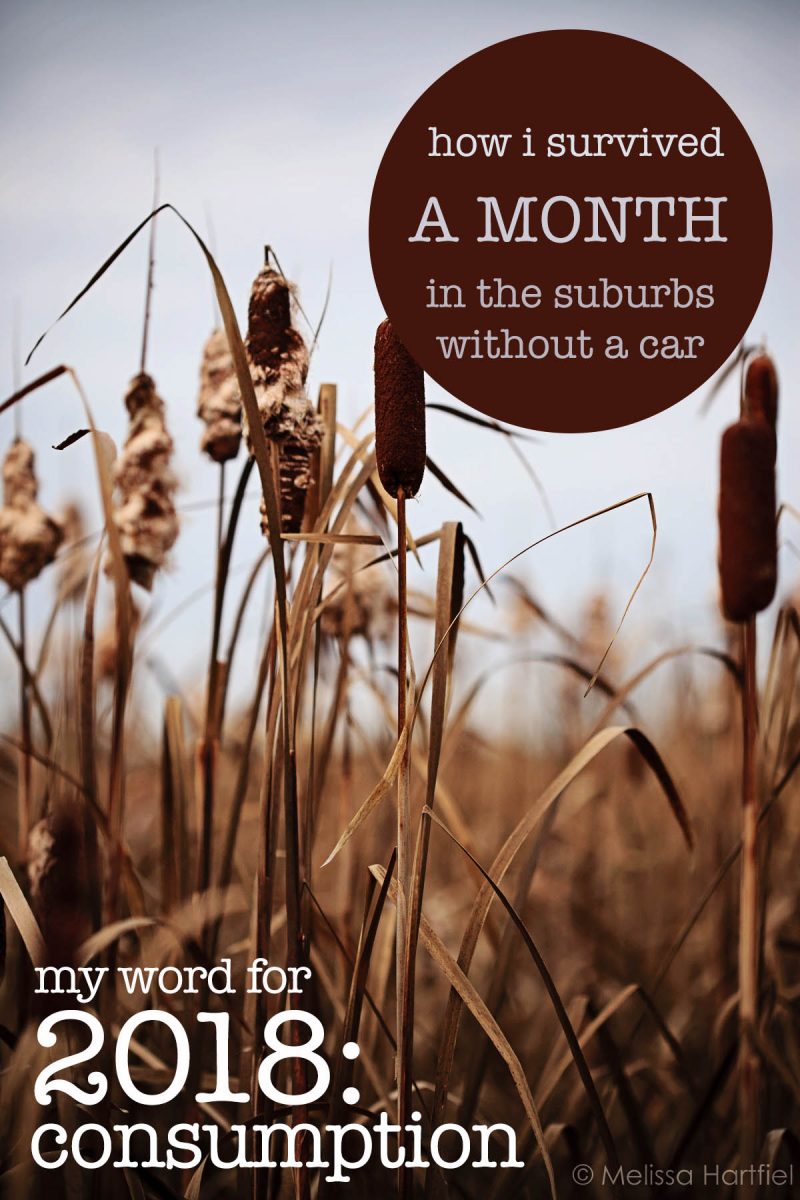 I’m back with another update on my 2018 Word of the Year, consumption.  But this update is a bit different! This time I’m talking about what it was like to be carless in the suburbs for a month.

I know I didn’t do a monthly update for April or May because honestly, it was pretty much the same as the first three months and it was getting boring.  But at the very end of April, I had a scary incident with my car. Scary enough that I knew I wasn’t going to be driving it again and I needed to bite the bullet and get a new car (my old car was a 2001 model so it lived a good life!).

I had to travel for work in May which meant buying a new car wasn’t going to happen as quickly as I wanted and so… I resigned myself to the fact that I was going to have to rely on alternate modes of transportation… in the suburbs.

As annoying as the whole car thing was, something interesting happened that I wasn’t really expecting…

Not having a car completely changed my patterns as a consumer in a way I’ve never really experienced.

Let me preface this by saying I’ve certainly been carless for periods of a week or two while traveling for work and I didn’t own a car when I lived in London. But there is a big difference between being carless in a major urban centre – where virtually all your day to day needs are within walking distance or a short transit or Uber/Lyft ride – and being carless in the suburbs.

Being carless in the suburbs for a month was a completely different experience – sometimes in bad ways and sometimes in surprisingly good ways!

1. Transportation – Getting from A to B

With no Uber or other ride sharing services in BC and no access to car sharing services like Car2Go and Evo outside of the city, my options for getting from A to B in order of preference were:

Transit in the suburbs has never been efficient or fast if you’re staying within the suburbs and in a lot of instances it was actually much quicker to walk than hop a bus. (and cheaper, better for you and more environmentally friendly!).  So walking was my preferred choice and what I did most of the time.

My biggest challenge was getting to and from the airport. I’ll start by saying I live about 17 minutes away from YVR airport, by car, in off peak traffic.

While I did discover a decent express bus that connected to the airport skytrain, it didn’t start early enough in the morning to have me at the airport in time for a 7am flight and it would have turned my 17 minute drive into a 50 minute trip. And coming home on a delayed flight that arrived after midnight meant there was no transit home either.

So I bummed a ride to the airport and I had to spend $65 on a taxi home from the airport – which is less than my parking would have cost if I’d driven myself.  Neither efficient or cheap.

There were a few!

First of all, I found out there were two new (to me anyway) bus routes a five minute walk from my house, one of which was an express bus that zips through three suburbs and can get you to a fast airport connection in one direction, and two major bus hubs in the other. I wound up using that route a few times.

So inter-suburban transit is improving! I would probably never have found this out if I had still had my car.

2. All That Extra Walking Had Side Benefits!

Second, I had absolutely no trouble hitting and going way beyond the 10,000 steps a day goal with very little disruption to my day!  And all the extra walking meant I shed a few pounds, had a very happy dog and had more time to think and listen to podcasts.

Not So Pleasant Surprises

It wasn’t really unpleasant but, I didn’t save any money – my car was still insured and what I saved on gas and parking for the small amount I drive, I exceeded in transit fares and one crazy taxi ride.

Always check google maps transit option to see what’s available for your destination – you might be pleasantly surprised! And getting up off your butt has a lot of benefits.

2. I Became a Hyper Local Shopper

I’ve always thought I shopped pretty locally. I trot down to my local corner drugstore or veggie market when I really need something and don’t want to make a trip in my car. Both of my banks have branches just down the street. There are pho and sushi restaurants and a local cafe that I frequent regularly in the same area. And on Sundays I take my reusable shopping bag and visit the farmer’s market in the rec centre parking lot.

But without a car, I had to rethink every single purchase.  Did I really want to get on the bus just to get a new magazine? Or to get dog treats? A new lightbulb? Some herb seedlings? Some Thai curry paste and earl grey tea? New kitchen tongs and a new fitbit charger (these were all real things I needed or wanted during May).

So I started paying more attention to what was in my immediate neighbourhood.  The little veggie market? They sell groceries and have an actual real live butcher in the back of the store (I never go to the back!).  I got my Thai Curry and my tea and all my fresh fruit and veg and dairy with a short walk.

Next door to the veggie market is a hardware store I never go into – I always go up to Home Depot, 2 miles away. I got my lightbulbs and my seed packets (I got beets, radishes, onions, lettuce and dill if you were wondering).

Next to the Pho place is a little gift shop that sells ICE CREAM in summer! A few doors down there’s a European deli I never go in to… but now I do.  Because they have delicious things in there!

Across the street by my bank, a brand new little bakery opened, run by two young girls working hard to bring their little dream to life.  And they make Copenhagens – my favourite pastry!  And right by them a new yoga and barre studio is set to open and next to that, a new indie liquor store just opened up. My drugstore sells magazines (although their selection was pretty sad).

And what about plant seedlings and dog treats?  I got all the plant seedlings my heart could desire at the farmer’s market and I decided to walk up to a plaza a mile away where there was a small chain pet store instead of taking a bus to PetSmart.

The kitchen tongs and fitbit charger were ordered on Amazon and arrived the next day with Amazon Prime. I’m trying to be careful with on-line ordering because I’m still not too sure about the environmental impact of having things shipped in ones and twos and in half empty boxes.

Well first of all… obviously I don’t shop as locally as I thought! It was nice to find that when I actually paid some attention to my surroundings there was a lot more there than I thought.

One of the preconceived notions I had about buying from some of these smaller stores was that the prices would be much higher.  In some cases, that was true.  But in other cases (most cases it seemed) it really wasn’t.

Not So Pleasant Surprises

Well this one wasn’t really a surprise.  Unfortunately, doing a big grocery shop and stocking up on staples and bulk goods was not easy.  Neither was buying Sam’s dog food (big dog=big bag of dog food).  I realized after the fact that my regular grocery store does have a delivery service which I might investigate further.

I also ordered a few things from Amazon Prime but I became a little disillusioned when I saw these big, 3/4 empty boxes arriving with one little item in it.  Didn’t seem the most efficient or environmentally friendly way to go (but it sure was convenient! I wish convenient gelled more with doing the right thing sometimes…)

Don’t make assumptions about how much things cost based on where they’re sold.  And investigate your neighbourhood and see what’s actually available right on your doorstep.

3. I Became a Much More Thoughtful Consumer

Knowing that anything I wanted to buy meant either walking to buy it, hopping on a bus or ordering it online really made me reconsider every single purchase in a way I never have.  Mostly, because I can be pretty lazy!  Some days I really didn’t want to walk anywhere.  Every purchase got weighed against how far I had to go for it and how long it would take me to get there and back.  Some days, it just wasn’t worth the hassle!

4. Things I Wished For 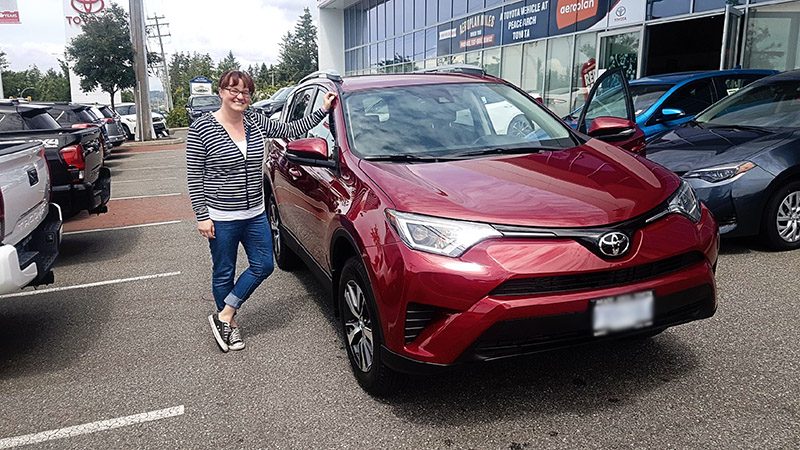 The hardest things for me were, in the grand scheme of things, not that hard.  If I had to have a wish list of things that I really missed or that really bothered me it would be this:

I’ve had my new car for a month now and I love it (I bought a 2018 Toyota RAV4).  I spent a lot of time driving around during June and taking Sam on some hiking adventures and other things we haven’t been able to do easily with my old car.

But, I actually really enjoyed my car free month and during July I hope to go back to being as car free as I can – especially now that I know how much my neighbourhood actually has to offer.  Now I can do it with the piece of mind that if I do need to go somewhere further afield or have an emergency there is a good, solid, reliable car waiting for me if I need it!