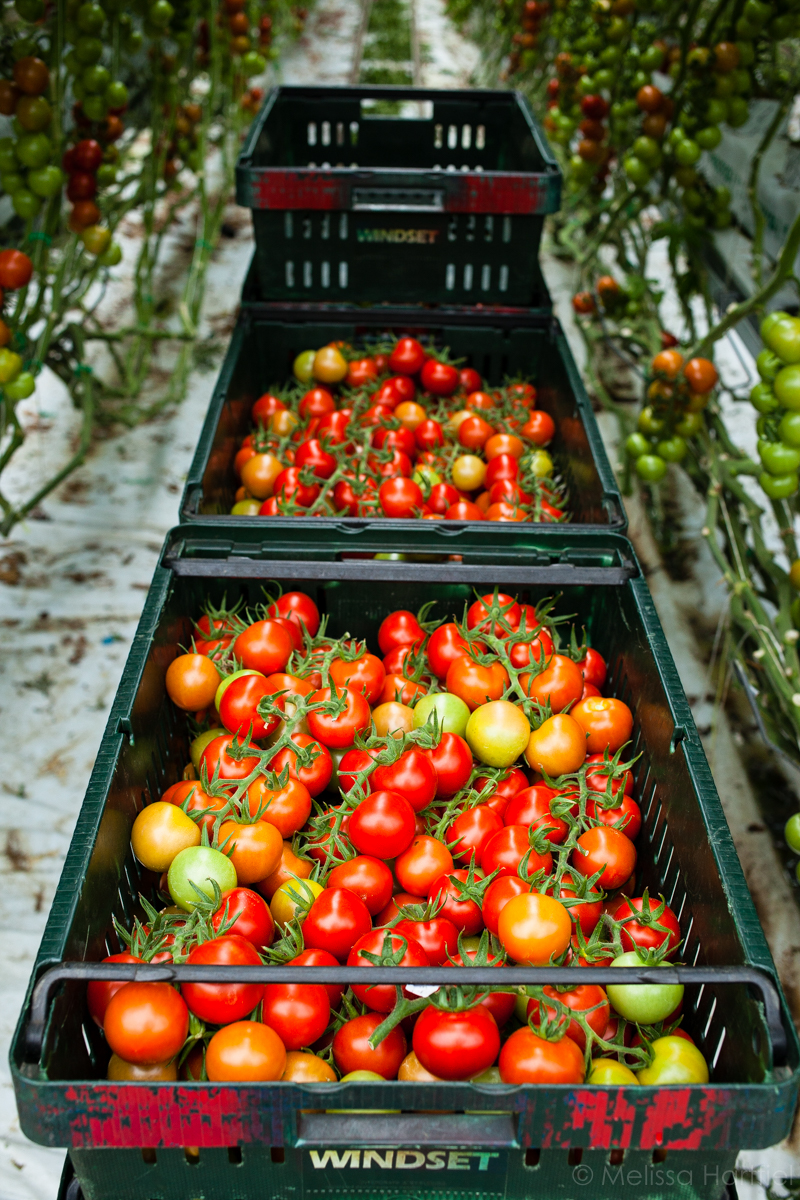 A few weeks ago I had the opportunity to visit Windset Farms here in Delta.  I went with Ethan, my partner in crime over at FBC and we were treated to our own tour with Ron, one of Windset’s senior growers.

I’m not going to lie – I completely nerd out on this kind of thing.  Do you all remember that show that Joan London used to do years ago called Behind Closed Doors?  She would visit places like Fort Knox, the New York Subway System, the CDC (I googled Behind Closed Doors while I was writing this post and found a whole youtube playlist of episode clips and completely fell down a long rabbit hole!).

I loved that show.  I am fascinated by what happens behind the scenes.  Especially when it comes to our food.  It’s one thing to grow tomatoes on your balcony for your family to enjoy for a few months every summer – and maybe can some of them or turn them into frozen pasta sauce.

But how about feeding millions of people tomatoes – all year round?  That’s another thing entirely. 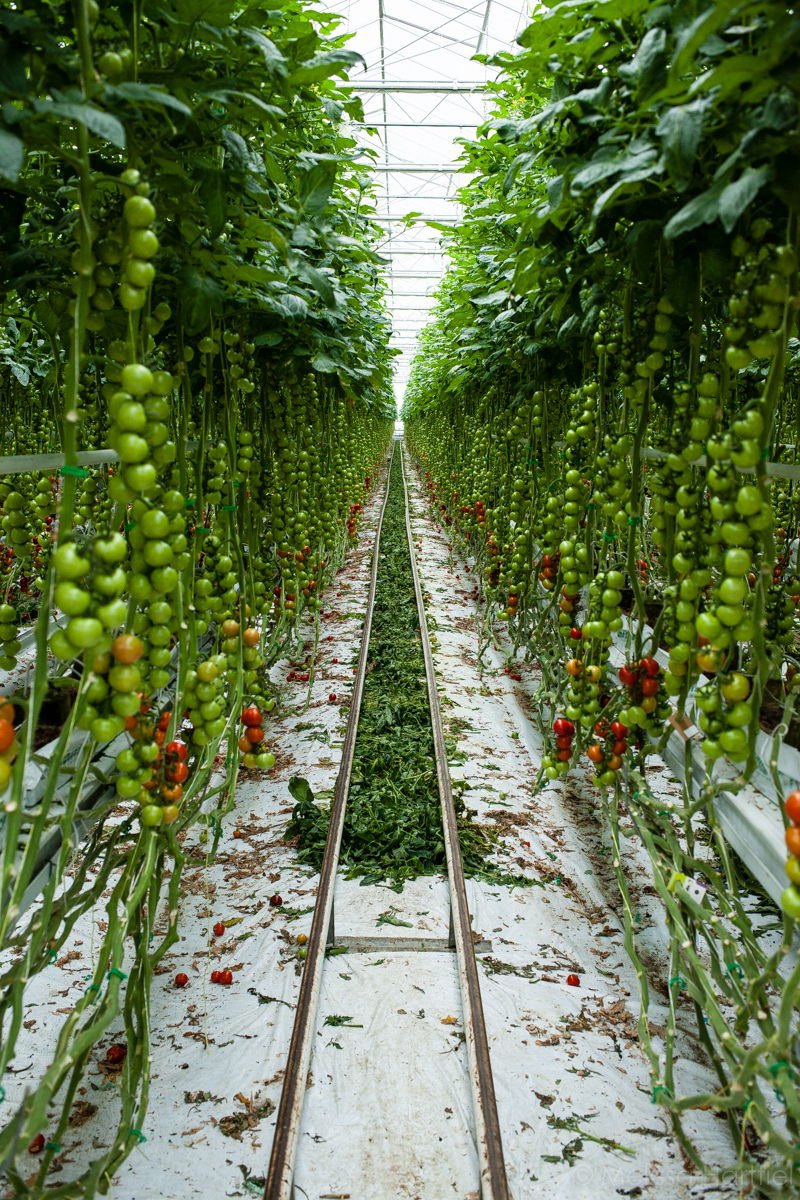 Picture that in your head – how much land does it take up? Where do you find that land?  How do you grow things?  How do you protect them from weather and disease? Where do you store all that produce? What are the logistics of getting it to people?

These are the questions that I wonder about.  Visiting a BCfresh potato farm a few years ago was my first real glimpse into food production on a significant scale and it only made me more curious.

So while a potato farm is very seasonal and all outdoors, Windset Farms is a family owned, year round, sustainable greenhouse farming operation.  They produce tomatoes, sweet peppers, cucumbers, eggplant and salad greens that are shipped throughout the world – mostly from their facilities here in BC’s lower mainland.

In fact, so much of western Canada’s greenhouse produce is grown in Delta that now, when I shop, I always look to see where my tomatoes and cucumbers are grown and if it doesn’t say Delta on the label, I put it back. For me, this is as local as it gets! 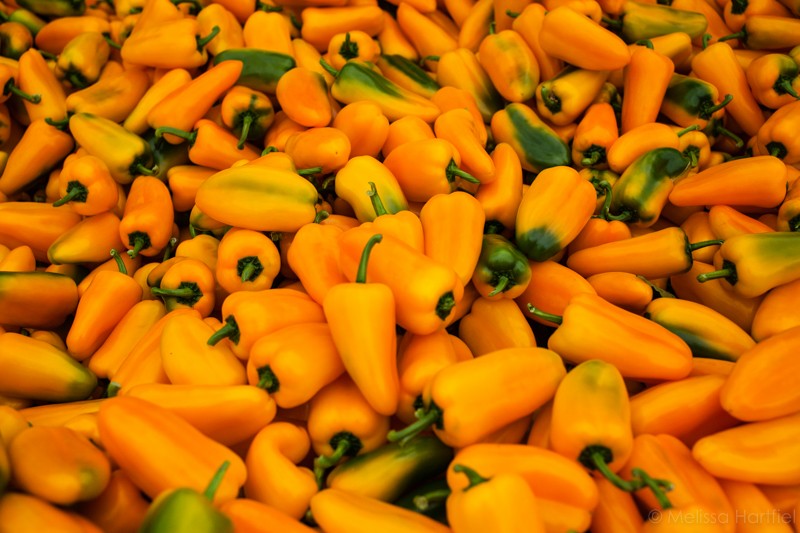 On our tour we saw tomato, cucumber and pepper production – all done in greenhouse facilities.  These greenhouses produce 4-10x the amount of food that a traditional outdoor farm could produce on the same amount of land – and they do it sustainably with responsible growing practices.  Windset produces non-GMO produce from naturally bred seeds. 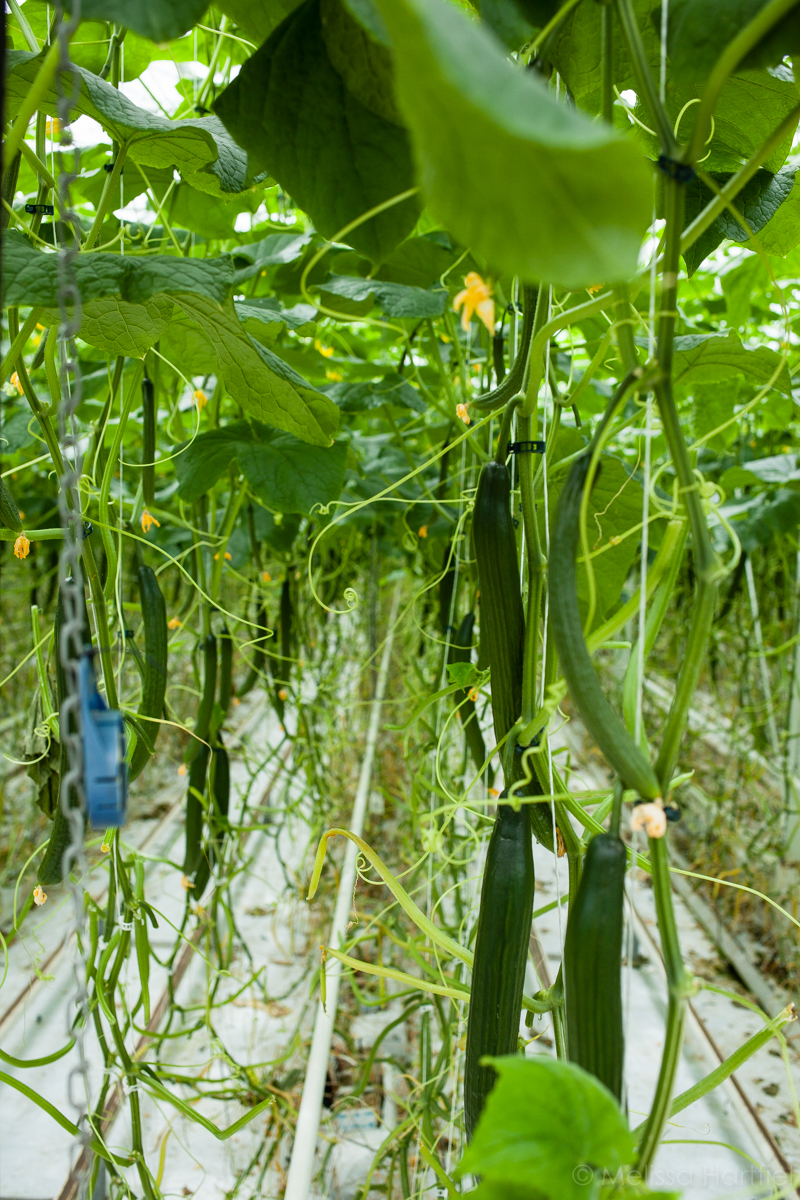 The plants, whether they’re tomatoes, cucumbers or peppers, all grow vertically – some of the tomato plants were over 15 feet tall – and they are all attached to strings that are raised and lowered as needed based on the size of the plant.  This makes sure space is used extremely efficiently.  One greenhouse can hold over 100,000 tomato plants!

The growing season also lasts longer as the environment can be very efficiently controlled – meaning fresh, local produce in the stores through most of the year.  Computers measure water, light, and air quality and adjustments can be made as needed.  But, as Ron noted, Mother Nature still plays her hand when she feels like it! 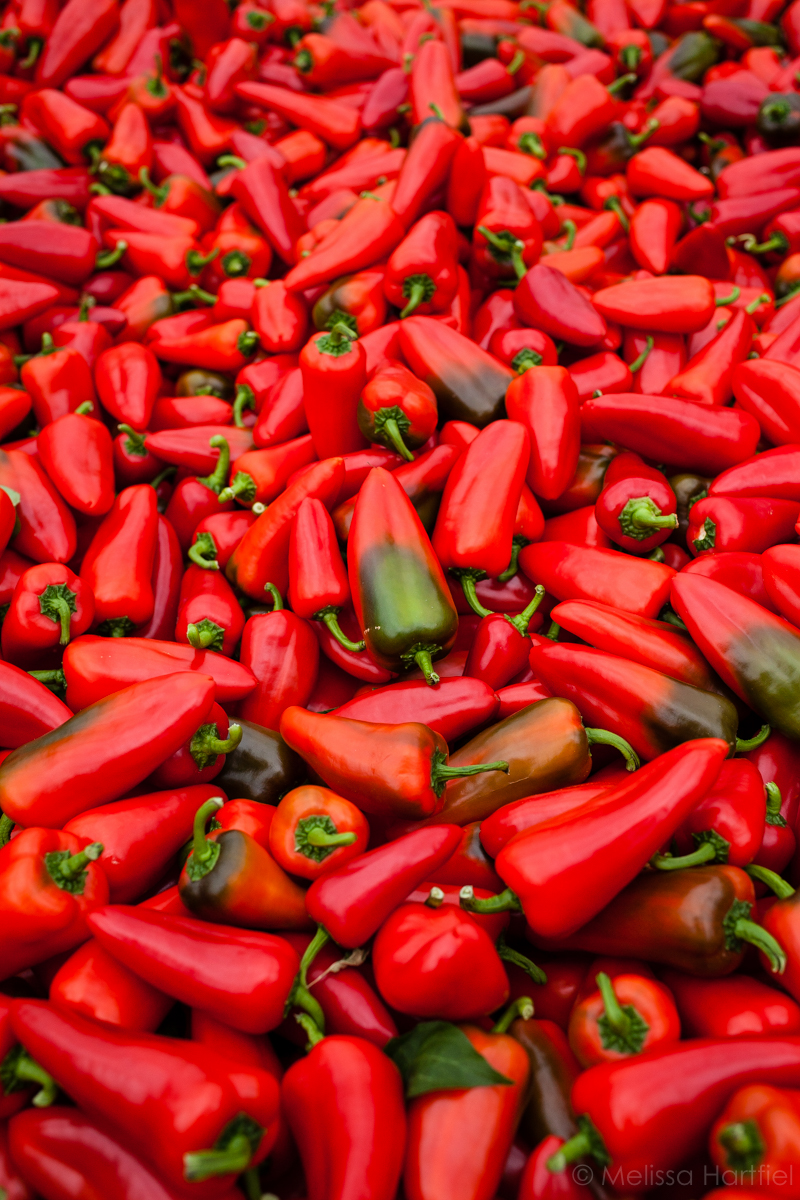 The plants are pollinated by bees – in fact at the end of each row of tomatoes were cardboard boxes for the bees to fly in and out of and throughout our entire visit we could see and hear them happily buzzing through the row upon row upon row of tomato plants.

Ron told us that in the early years they pollinated all the tomatoes by hand (with 100s of thousands of plants, you can imagine how painstaking and slow that must have been) but like Mother Nature already knows, they realized bees do it much better and much more efficiently than humans do! So bring on the bees! 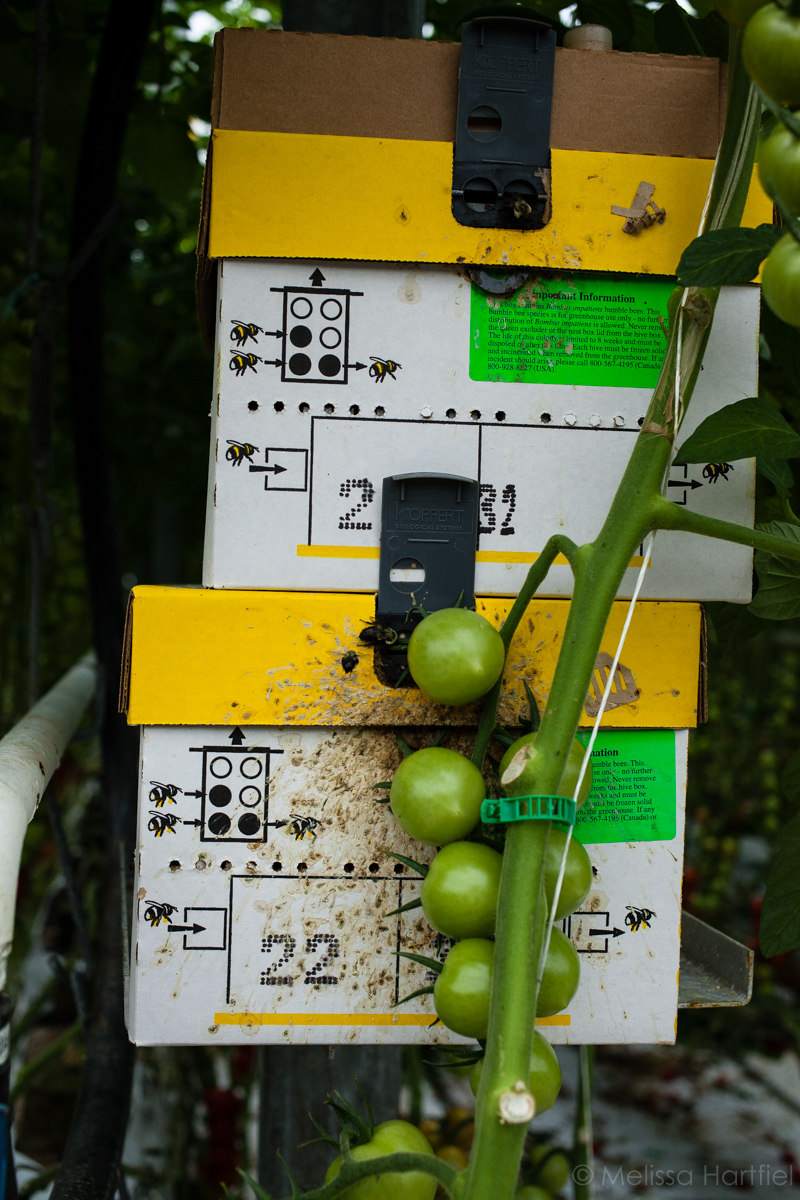 As with any crop, pest protection is a concern and we learned how lady bugs, preying mantis’, other insects and even certain plant species are all used in their pest management plan! I really was hoping to see a preying mantis on our tour but no such luck!  I thought he might have a little Sheldon Cooper head 😉 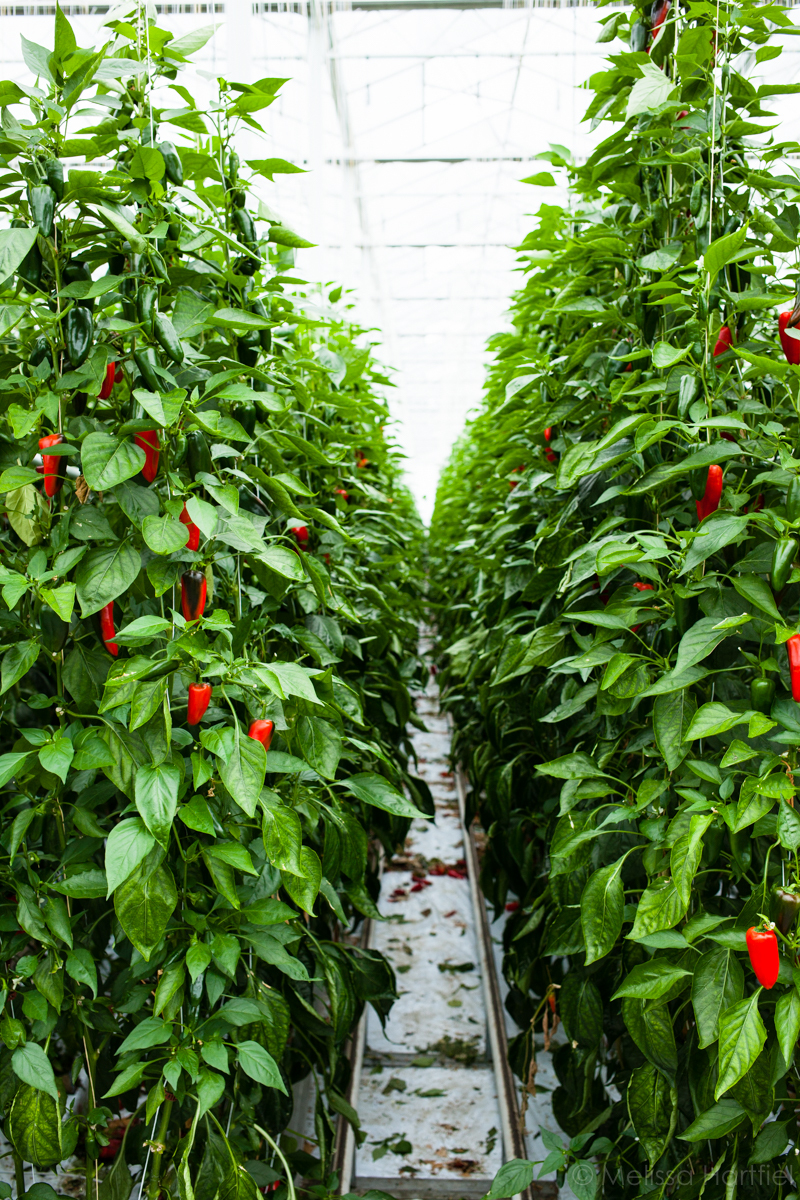 The farm we were on had two reservoirs on site where all the water used for the greenhouses comes from.  They also collect rainwater year round (which in Delta is basically collectable every single day from November through March) which they repurpose, making them able to operate without using water from metro Vancouver’s reservoirs. 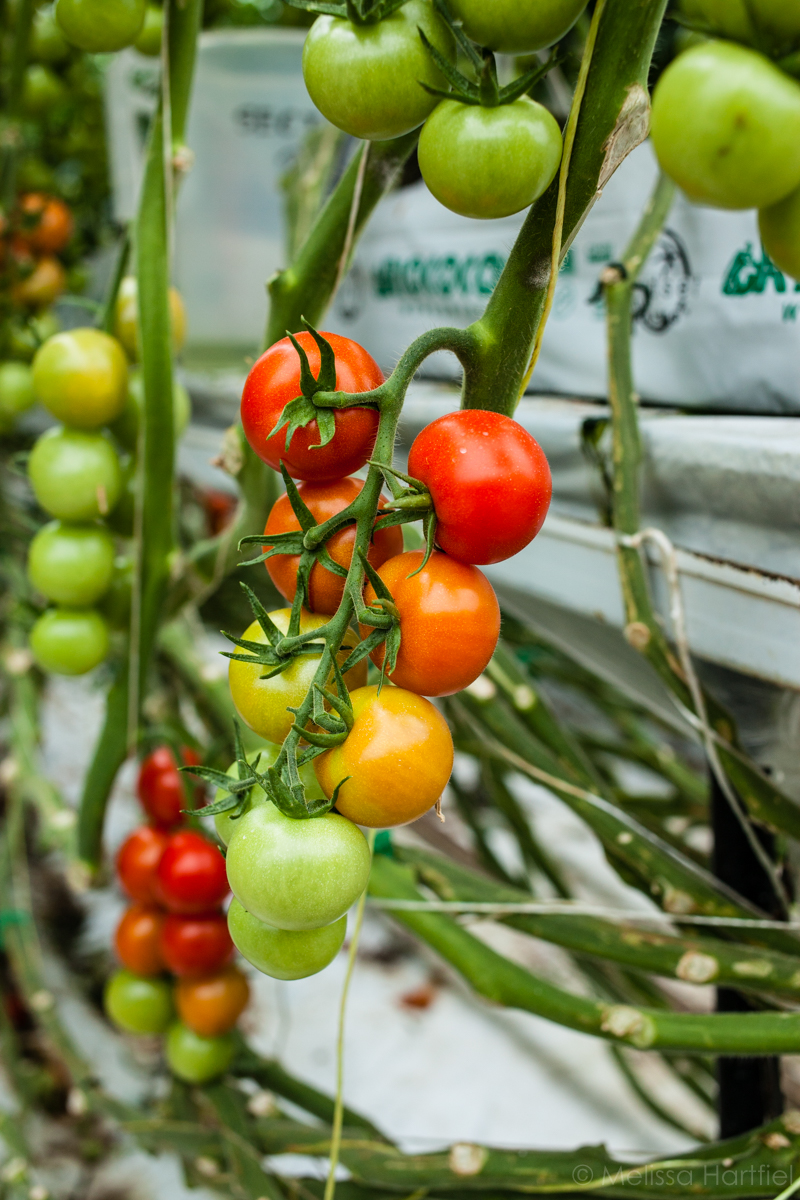 All through our tour we got to sample everything right off the vines.  Even some of the test varieties that they’re trying out to see if they’ll add them into full production.  We ate big tomatoes, cherry tomatoes, grape tomatoes and Ron even got me to try their sweet peppers – I don’t like hot peppers so I never buy them but he convinced me these weren’t hot at all – and when I tried them, they were indeed perfectly sweet.  Since then I’ve been adding a rainbow of sweet peppers to everything I make! 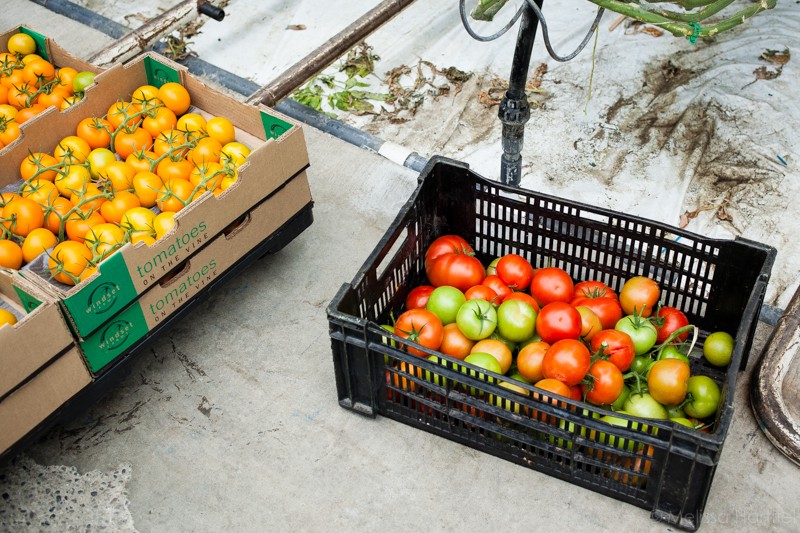 After a quick tour of the grading and packing facilities, we left the farm quite in awe of the sheer size and efficiency of it all.  Feeding a globe full of people is not a task for the faint of heart and it was fascinating to see the innovative and sustainable ways that farmers are embracing to make sure there’s good, healthy food for all of us!

Disclosure Notice: This is not a sponsored post.  I was invited to visit Windset Farms in relation to my day job. As part of the tour we were given assorted produce to take home but I was not asked or expected to write about my visit and I was not compensated for writing this article.  I wrote it because I truly believe it’s important for all of us to know where our food comes from, who grows it and how they grow it.