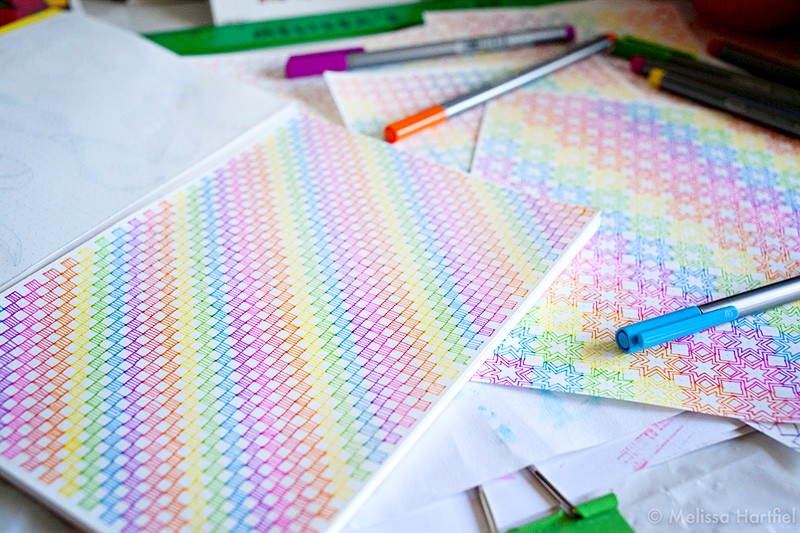 It was put forward by author Malcolm Gladwell with the reasoning behind it being that in order to become really really good at what you do, you need to put in 10,000 hours of actually doing it.

Being gifted has nothing to do with it. You actually have to get off your butt and practice whatever it is you want to be good at: drawing, accounting, surgery, baking…

So, I’m not writing about anything new here but, this idea has been on my mind a lot lately for a myriad of reasons that I won’t bore you all with!

But, if you’re curious about where I’m going with this, feel free to follow along here. I warn you though, my thoughts are a bit jumbled still and it might be a bit twisty and turn-y!

On my last trip to Toronto in June, I got see a lot of people who I hadn’t seen in a while and I had so many lovely comments on my 100 Day Doodle Project, which really tickled me pink! I don’t think my doodles are particularly artistic or even very good.  But, for me, they’re fun and if others get a smile or a giggle from them, that’s just extra groovy goodness. 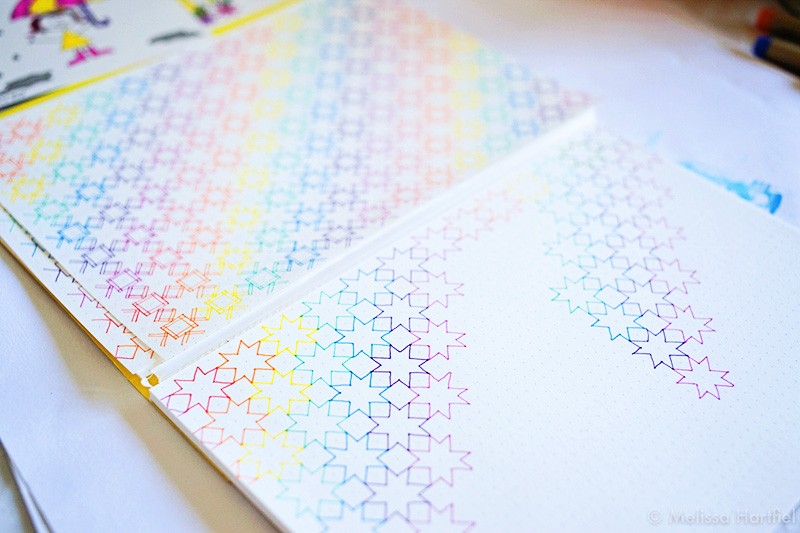 Last week I was listening to a recent episode of The Creative Penn (as an aside – are you a writer? You should listen to this podcast – it’s one of my new favourites that I have to add to this list!) with Joanna Penn and her guest, Grant Faulkner, on how to write 50,000 words (or a small novel) in a month.  Faulkner is the Executive Director of NaNoWriMo (National Novel Writing Month).  It’s a really interesting discussion about the art of sitting down and writing – they even discuss the 10,000 hour principle and how NaNoWriMo is a perfect place to start on your road to that 10K hour level of mastery.

I did NaNoWriMo several years ago. I wrote the 50,000 words.  It was a fantastic experience – I highly recommend it if you want to write long form fiction.  It improved my writing and, more importantly I think, helped me lose some of my perfectionism blocks around creating so I could actually get the 50K words out!

But all this got me thinking… all the things I’ve gotten good at, or at least competent at, have involved practice and repetition.

It started with piano lessons when I was 8 (and carried on until I was 17).  Practicing every day.  Even on weekends (blech).

And soccer practice dribbling and shooting drills, which I hated more than piano (and one could argue I never got particularly competent at playing soccer – or came close to hitting 10,000 hours).

Essay writing… in high school and university. So. Much. Writing.  But I can write a research paper like nobody’s business now!

Then in 2005 I did my first 365 Day project with my camera.  One photo a day for 365 days.  That one may have been the most satisfying because the improvement was steady and quite dramatic (and I had a visual record of the improvement)!  Not only that, but it was the first creative project I undertook where I felt an incredible drive to get better.  I could have taken boring, mediocre photos every day for a year but I enjoyed the medium so much that I really did push myself to get more creative and more adept with my camera every day.  I wanted to produce amazing photos.

I’ve since done other, shorter photo a day projects but that first 365 was definitely a catalyst to push my abilities forward through practice and experimenting. 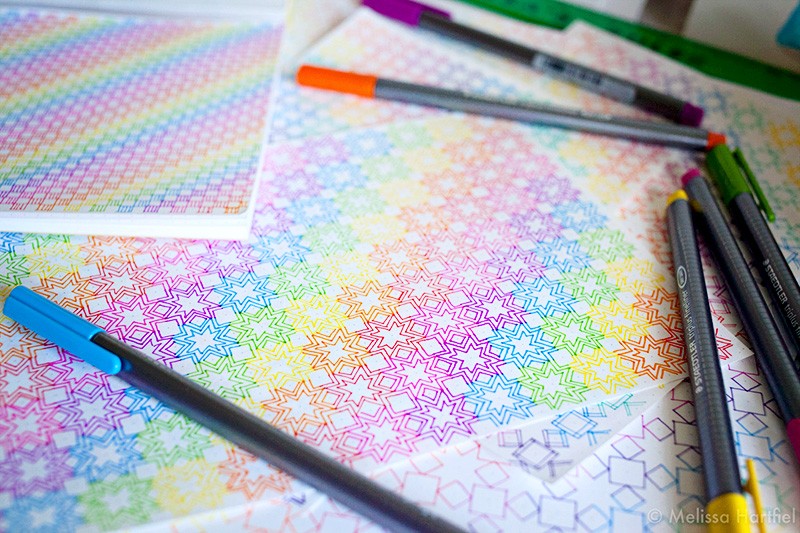 Then I did NaNoWriMo in either 2007 and or 2008 – I can’t remember which.  That was such a huge amount of writing to do in such a short period (with some sort of semblance of plot being required) that it really forced the inner critic we all have to SHUT UP! You have to make it be quiet or you’ll never get the words out. It’s a truly valuable exercise.

I know… I said that already.  But it is.

When you actually sit down and work out how much time you’ve spent trying to master a skill, you realize that 10,000 hours is a LOT of hours.

And yet how often does our frustration hit its breaking point and we give up after a few days, or weeks, or even months when we aren’t doing things at an expert level?

Probably way more than any of us would like to admit (I know I don’t want to admit it).

But, when I sit back and I look at all those projects, I realize that even though I’m not at 10,000 hours on any of them, except probably writing, they all required dedication, discipline, consistency, and getting over perfectionism and just getting something on the page, screen, canvas – whatever medium it was.  And just doing that every day for 30 days or 100 days or 365 days still brought about dramatic improvement. 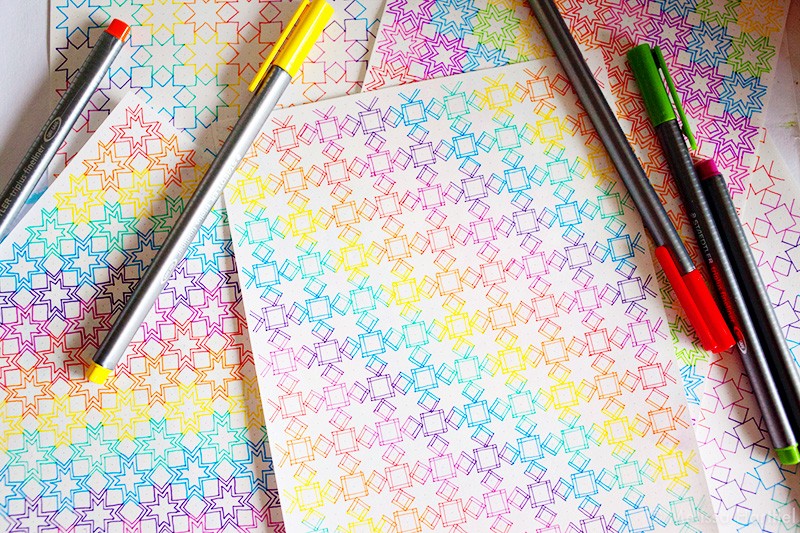 Lately, I’ve been doing what I call rainbow squares.  I doodle squares.  In rainbow colours.  Every night for an hour or so.  Not to get better at anything – more because it’s meditative and calming.  But I noticed the coolest thing after doing this for a few weeks. Every time I would do a square doodle, my brain would see a new variation on it, that would turn into the next doodle.  I have a sketchbook packed with rainbow square doodles, with no two alike.  And that never would have happened if I hadn’t sat down every night for an hour and just drawn squares for no other reason than it calmed my frazzled brain.  A square is a square – but my ability to see variations and possibilities is growing.  Sitting down to create every day, really does make you more creative.  Giving yourself time to create with no worries about what the outcome will be, really does make things happen.

So now, I wonder, where would I be if I came close to 10,000 hours on any of those other projects?  It’s intriguing to think about isn’t it?  Next time you’re trying something new and you think you’ll never get anywhere, ask yourself how many hours of practice you think you’ve put in. And then sit down and work on it.  Every day.  For a long time.

And see what happens!