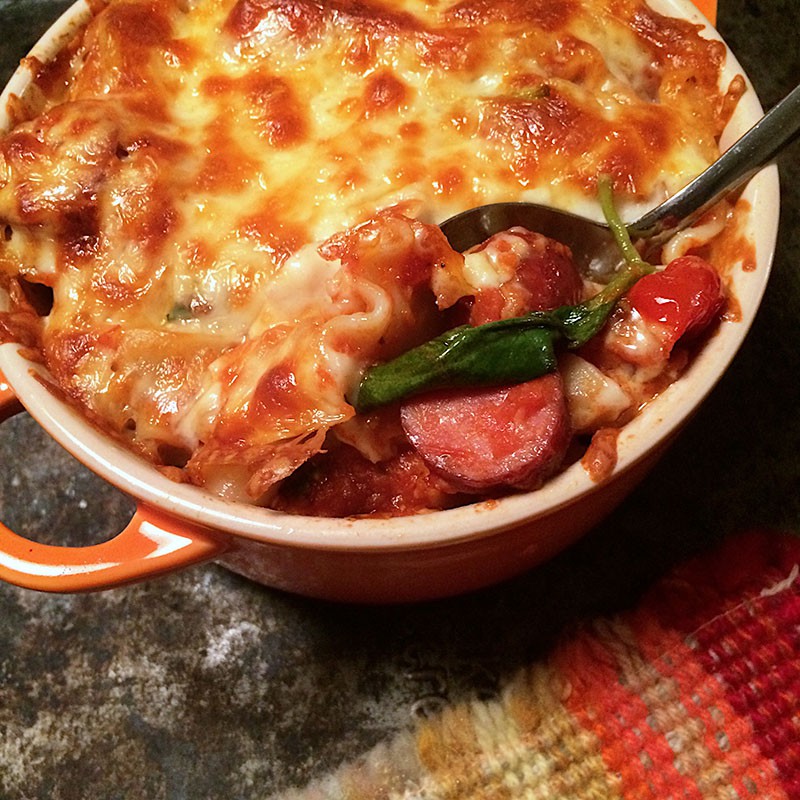 It’s not too often I post savoury dishes but truth be told, I am a much better cook than I am a baker.  I have a knack for taking random fridge contents and coming up with something pretty tasty.   Like my pantry challenged lemon chicken thighs or the oh so quick and easy tomato, chicken egg scramble.

The problem is… they’re totally random.  I never measure, I never write stuff down and nothing ever comes out the same twice.  But it usually tastes good.

Last week the weather was miserable and I put my back out and was bored out of my mind.   All I wanted was something comforting to eat that was cheesy and tomato-y.  So I pulled myself up off the couch for 20 minutes to make what I call “leftover lasagna”.  Anyone can make it and you don’t need a recipe.

Plus, I wanted a chance to use my very first Le Creuset pot – a cute little bitty Mini Cocotte that I got this summer and haven’t really had an opportunity to use. 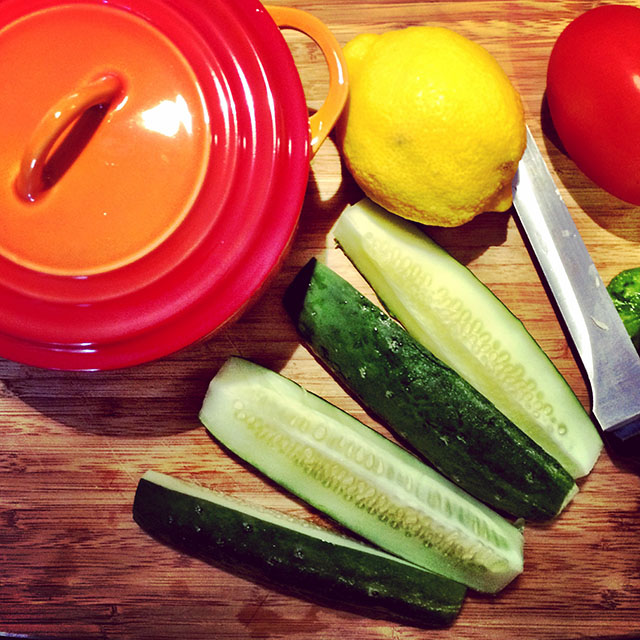 Ethan and I regularly get invited to blogger/brand events in Toronto because of FBC.  The only problem is, neither of us lives anywhere near Toronto.  So we always politely decline and secretly wish that more cool stuff happened in Vancouver.

But this last summer, we got an invite from Le Creuset to attend their 90th anniversary event and it just happened to coincide with a work trip we already had planned for Ontario and Quebec. I was going to be in Toronto a few days earlier than Ethan so I was the only one able to go and I happily accepted the RSVP!

As usually happens on most of our Toronto trips, we were staying with a good friend in Etobicoke.  It’s great – the streetcar stops quite literally, outside his front door and takes you straight downtown along Queen Street.  It’s a bit of a trip – usually 45 minutes to get downtown – but it’s so easy and so cheap.  I just take a book or listen to a podcast until we get to Queen Street West and then I get a kick at looking out the window at all eclectic little shops along the street.

On this particular day I had two very casual coffee meetings at 11am and 2pm before heading to the Le Creuset event at 6.

Ok. so I never know what to wear in Toronto.  No matter what I put on I am inappropriately dressed. So, knowing I wouldn’t be able to come home and change at any point during the day and that the evening event was a blogger event and  it was ridiculously hot and muggy in Toronto, I put on a pair of long pants that I could roll up and be all cute and cooler during the day, with a tank top and my “fancy” striped hoodie and flip flops.  I stuffed a pair of black ballet flats in my messenger bag and figured I could change into them in the evening and roll my pant legs down and be juuuuust fine.

The plan worked sort of ok until between meeting one and two I got caught in a torrential downpour that was Vancouver worthy while waiting for the streetcar.  There was a tiny little shelter with about 20 people packed into it.  I, being the exemplary Vancouver girl that I am, did have an umbrella in my bag so I pulled it out and stood under a very tiny building awning (it was about a foot wide).

This is how heavy it was raining: the awning did nothing and my umbrella started to leak.  Yes.  The water was coming through the umbrella.

We waited and waited and waited for the streetcar, which normally runs every 10 minutes, and it never showed up.  Somebody running by about 20 minutes later yelled out that there was a problem back down the line and the streetcars were detouring.  So I started trudging – at least as best as one can trudge in slippery flip flops through giant puddles – down the street to see if I could find the detour streetcar.  By this point the umbrella was really just me trying to look the part – it had lost all functionality.

Two blocks down I caught another streetcar and managed to straggle in to my next meeting, fortunately with a friend, looking like a bedraggled rat.  All traces of makeup had been washed away, my hair was going to dry into an unfortunate frizzy mess and I appreciated that choosing flip flops meant that at least my feet would dry out before I had to leave.

I mentioned the Le Creuset event which, happily my friend was also attending, and I asked her which other bloggers were going to be there.  She didn’t know of any… which was a tiny red flag in my brain.

Sure enough, a few hours later I arrived at the TIFF Lightbox, only now slightly damp, and with dry flats on my feet. Saying I looked rumpled would be complimentary.

It was obvious from the moment I walked in the door that this was not a blogger event.  It was an industry event.  Business attire.  Executives, celebrity chefs, publishers…people arriving from work in town cars.  Everyone looking super polished.

Nobody had frizzy hair except me.

Nobody was wearing a fancy hoodie.

Nobody was wearing ballet flats.

It was a big event and I knew exactly two people in attendance.

I wanted to shrink into a ball and hide.  Thank goodness for benches, cell phones and delicious cocktails! (what did we do in uncomfortable social situations before cell phones?).

So I huddled up with my cocktail (I hadn’t eaten since breakfast so you can imagine how easily that went down!  Suddenly things didn’t seem so bad!) and waited until they opened up the main room for the event. 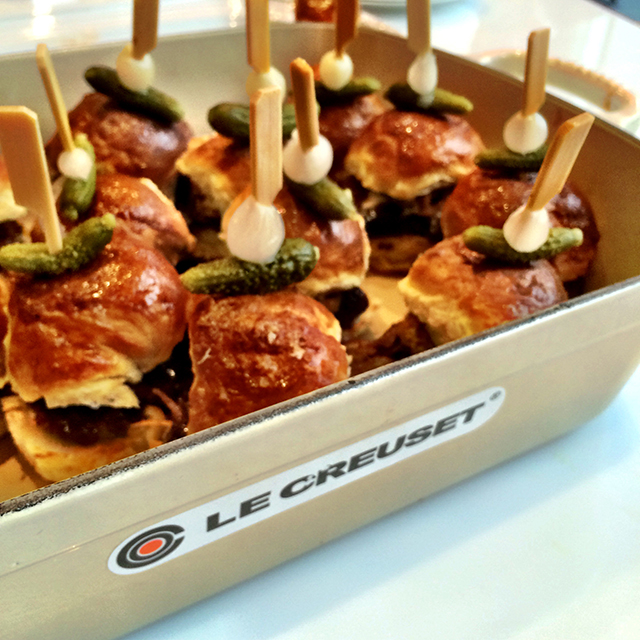 The food was amazing – Le Creuset had brought in some of the top chefs from across the country for the event: Jason Bangerter, David Hawksworth, Dale Mackay, Massismo Capra – just to name a few – who prepared some very tasty bites.  I ate a few, took a few snaps for the FBC IG account and then when it was socially acceptable to do so, I snuck out.

All I wanted to do was get back to my friend’s house, have a hot shower, curl up in my warm, dry PJs with dry socks and a big bowl of Miso soup.

But on my way out I was stopped!

And handed a gift bag.  A small, but very heavy gift bag.  I opened it up on the streetcar and nearly squealed with delight – my very own Le Creuset Mini Cocotte in orange!

I got home, got my Miso soup, had my shower, put on my PJs and ate my soup while watching Netflix – with my cute little pot sitting on the coffee table the whole time so I could admire it every five minutes!

So… let’s get on with the lasagna.

This isn’t real lasagna (although I do make an amazing version of that if I do say so myself!).  But it’s a great way to use up leftovers.

You know how when you buy a box of lasagne noodles there’s always a few that crack and break and aren’t really too usable.  I save them all up.  When I’ve got about 8-10 broken noodles worth, I break them up into even small pieces, and boil them all up in a pot until they’re al dente.

In the meantime, I slice up some sausage and cook it up with some chopped onion and garlic in a large pot with a little bit of olive oil.  You can use any kind of sausage or even bacon or leftover ground beef, chicken or turkey – whatever meat you have on hand (or leave meat out if you’re vegetarian!).

I pour in a small dash of wine to deglaze the pot and then add in some tomato sauce – it can be leftover jarred pasta sauce, or, if you’re like me, I keep little pots of homemade pasta or spaghetti sauce in the freezer.

Then I chuck in whatever leftover veggies I have in the fridge – broccoli, carrots, peas, green beans, spinach – whatever I have on hand.  Note, if you use spinach, add it to the mix right at the end so it just barely wilts.

Then I add in the cooked noodles, stir it all around with a little grated parmesan – but if you have leftover cottage cheese or ricotta, you can toss that in as well.  Taste it to make sure it’s seasoned enough for your taste.  Pour the whole mix into an oven proof dish and top with grated mozzarella (or any kind of good melty cheese – cheddar will work just fine).  If you have more than will fit in the oven dish, just put it aside and stick it in the fridge for leftovers.

Pop the dish in the oven at 350F and let it cook until the cheese is all melty, bubbly and starting to go all golden and oozy.  Pull it out and eat it straight out of the dish.  It’s not traditional lasagna but it will be delicious!

Simplicity – in one pot.  In this case, a fancy little Le Creuset pot!

Disclosure notice:  While I did receive my Le Creuset ovenware as a gift, there was no expectation and I was under absolutely no obligation to write about it. I just thought it was a funny story people would enjoy and, I freaking love this little pot.  It’s adorable.