The last year has seen me spending a lot of time back east with multiple stops in Toronto and Montreal. And that has meant a couple of things: a lot of sleeping on a friend’s couch and a lot of dining out!  Today I’m writing about some of my current favourite places to eat in the Toronto downtown core. 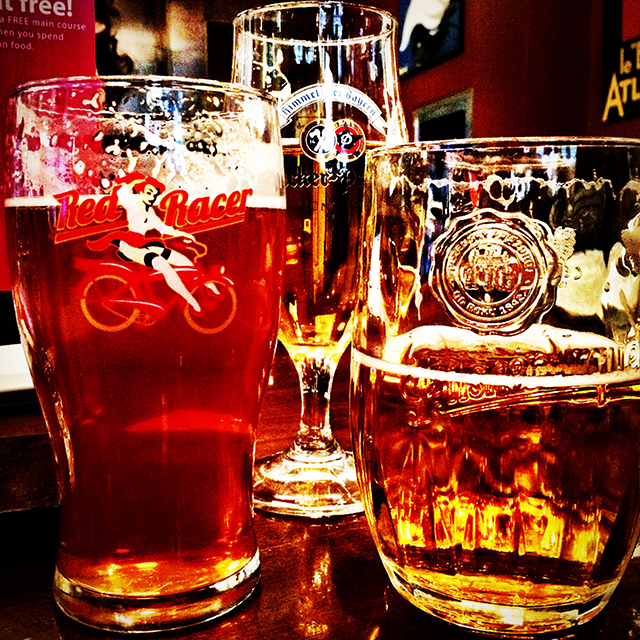 I’ve spent so much time working out of Toronto coffee shops that I almost feel like doing a post rating them all on how good they are to work from! But instead, I’m going to focus on some of my favourite places to eat over the last year in the downtown core.  I’ll have another post soon on some of the really great places that have popped up on College Street recently.

O&B’s restaurants have had a soft spot in my heart since I met my FBC partner in crime, Ethan Adeland, for the first time at O&B Canteen in 2011 and we bonded over Mac n Cheese. Bannock opened later and I went there for the first time in December of 2013 when I discovered it was literally around the block from the hotel I was staying in in the Hudson’s Bay building!

For years when I had a corporate job, I would stay at the Sheraton Centre when my employer sent me to Toronto several times a year and there was never anything good to eat nearby that wasn’t fancy, didn’t cost a fortune and didn’t make you feel incredibly awkward if you ate there alone, as one often has to do when you’re on a business trip.  How I wish Bannock had been there then! 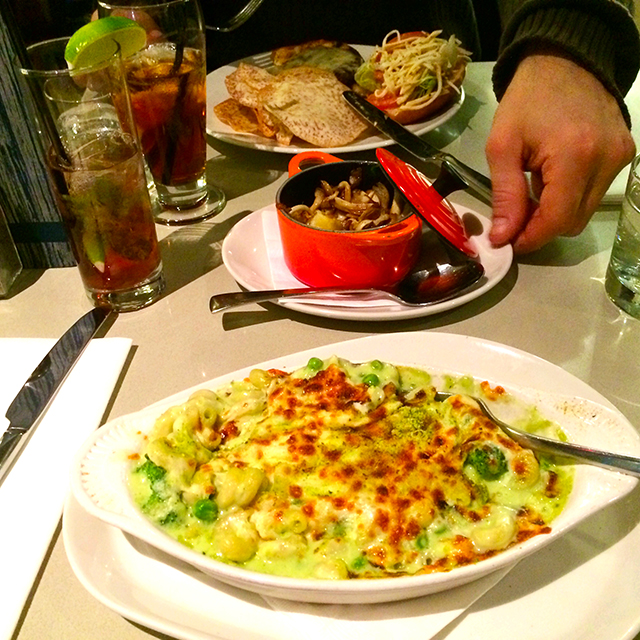 My second trip to Bannock was this past December and both meals have been really enjoyable.  Being on the eternal ultimate mac and cheese quest, Bannock has hit the mark twice with different variations on the classic that I love.  The most recent version had peas, spinach and broccoli with mustard greens in it and it was ooey gooey cheesy but also creamy with some zip to it and perfectly al dente noodles.  Mac and cheese needs to have that perfect blend of creamy sweet goodness and sharp tang to make my list and both versions I’ve had at Bannock have hit the mark (the first version contained devilled eggs and ham and was brilliant!).

The atmosphere is that of a casual cafe, there is a good amount of seating, the staff are knowledgeable and one side of the restaurant focuses on takeout – their “grab and go” section – perfect if you want something to eat in your hotel that’s not room service or a Tim Hortons sandwich!  On this trip my dinner partner had the bannock cheeseburger and root chips with a side of northern woods mushrooms.  He pronounced both of them to be delicious.

Speaking of Mac n Cheese, Ethan and I hit up The Gabardine for lunch this past December.  Our friend, the lovely Rhonda of Olive and Ruby, took us there for lunch in between meetings and we totally dug it.  In the heart of the downtown core, it’s tiny and fills up fast when the lunch crowd hits and it’s easy to see why: comfort food taken up a notch! 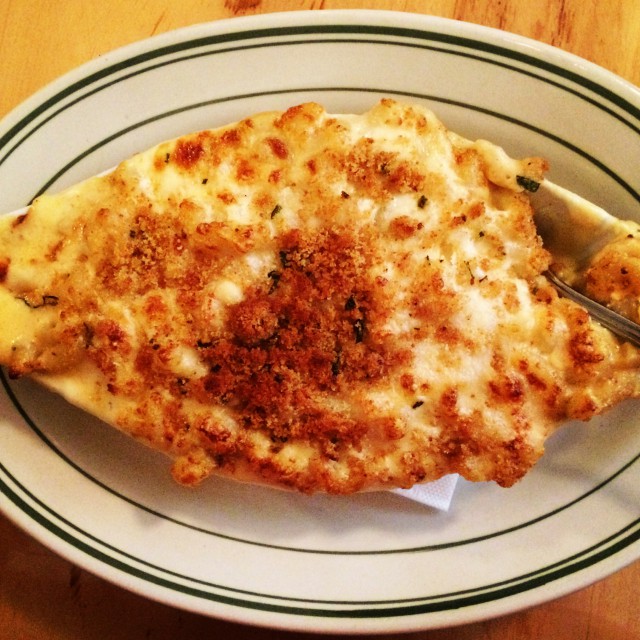 The menu simply says “Mac n Cheese with breadcrumb crust” (you can add ham for an extra $2).  Nothing fancy.  But oh my goodness… creamy cheesy heaven on a plate right in front of you.  This is what mac n cheese should be – all about the noodles and the cheese and the cheese sauce.  Perfect blend of cheeses, perfect tang, perfectly cooked noodles and perfectly creamy sauce to noodle ratio.  This is my current favourite restaurant mac n cheese.  No doubt about it.  I wish it was closer to home.

I may have a hard time pulling myself away from the Mac n Cheese on the next visit but Chicken Pot Pie is another favourite of mine and theirs looks pretty promising!

Richmond Station has long been on my list as a must visit restaurant in Toronto and in February I managed to make it happen when I went for lunch with Shareba from In Search of Yummy-ness.  This was a bit of a treat – the menu is a little out of my usual price range for lunch with all the mains being over $20.  It’s a small menu that’s seasonally driven along with a selection of daily specials. 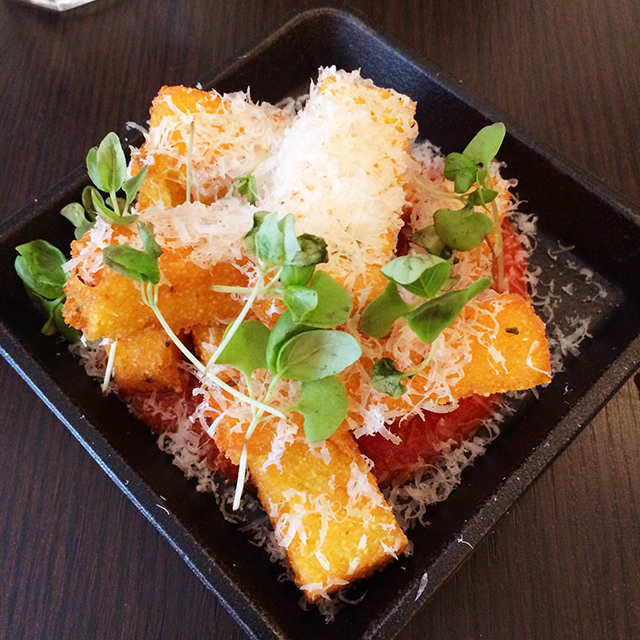 We shared the polenta fries as an appetizer and I hate to sound greedy but, I’d have happily eaten the entire dish on my own along with my entree.  I suspect Shareba may have felt the same way. They were perfectly crispy and served with parmesan and a red pepper rouille.  A perfect start to our meal. 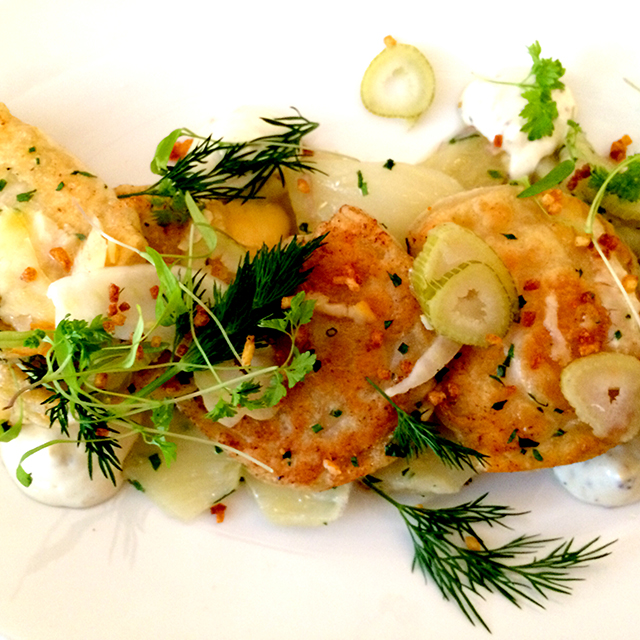 I also had the pierogies as my entree.  Coming from a Ukrainian background, I take my pierogies very very seriously and I usually don’t even bother eating them in restaurants because they’re always a massive disappointment.  I have no idea what prompted me to order them here – I think I liked the flavour combo that was described – sweet potato and cheddar.  Whatever it was, I’m glad I did.  They were pan fried (most places serve them boiled without frying them and it’s just… so… wrong…) and seasoned to perfection.  They were served with beer braised cabbage, caramelized leeks, mustard creme and lots of dill, which I loved.

We also had some of their fresh pressed juices to drink and sampled from their dessert menu – it was a lovely splurge and I’m glad I made the effort to check it out.

From a lunch time splurge at Richmond Station to cheap and oh so cheerful at Banh Mi Boys.  Banh Mi Boys has been on my list of places to hit up in Toronto for well over a year and on this last trip I insisted that we make a stop.  We went to the Yonge street location at lunch hour and were a bit frightened by the lineup which is full of Ryerson students, financial types, bicycle cops and the lunchtime office crowd.  But it moves very quickly so don’t let it deter you.  If you decide to eat in, be prepared to share a table with strangers – it was packed but most people take their food to go. 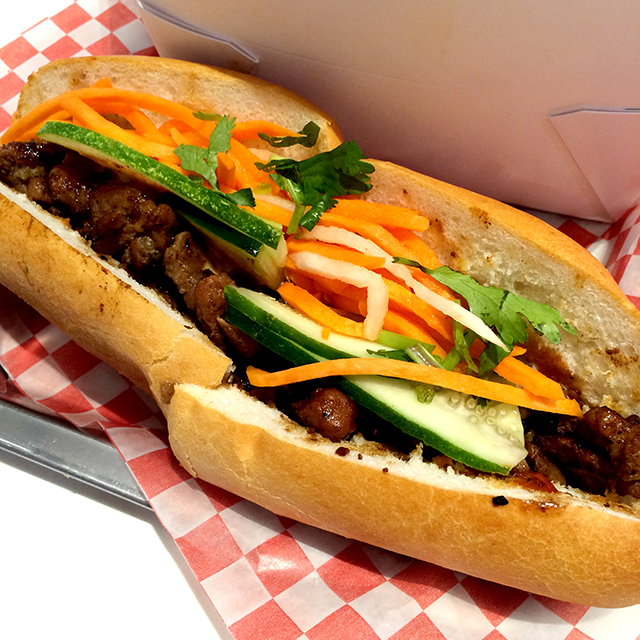 I went for the straight forward grilled pork banh mi, Ethan had the 5 spice pork belly and we decided to split some kimchi fries (thankfully! they were huge!).

There’s nothing fancy on this menu – straight up Vietnamese Banh Mi sandwiches.  The difference? The ingredients are the best.  The bread is buttery fresh, soft and with a crispy crust – I would have happily eaten the buns on their own with some butter.  The toppings are perfect – crisp pickled veggies and loads of fresh cilantro and the meat is perfectly seasoned.  If I lived or worked nearby, I would probably be eating here at least once a week. 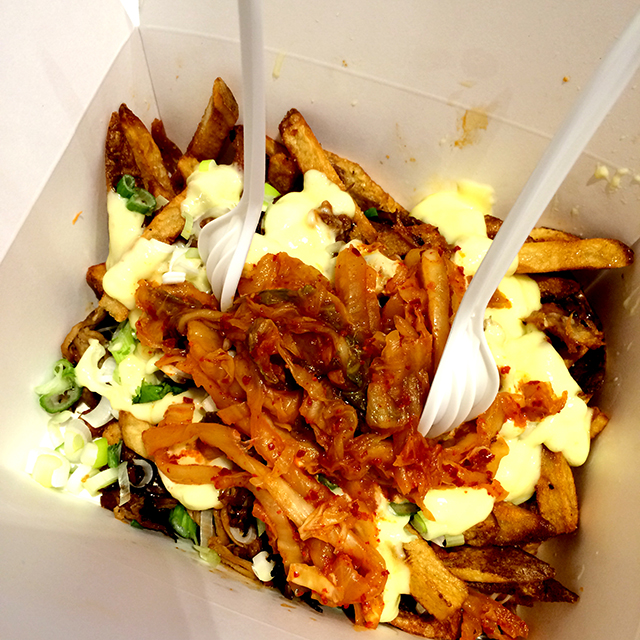 Ethan went up to order while I got us a table and he took it upon himself to add kimchi fries to our order.  And this is why I take him places.  It was a very good decision.  It’s fries topped with pulled pork, green onions, garlic mayo and, of course, kimchi.  When I saw them on the menu I frowned at the $5.49 price tag but when I saw the box (yes, they come in a box) of fries, I changed my mind.  This was like a serving of a poutine made for two people.  And it was delicious.  Ethan made a good call.

So for cheap, cheerful and absolutely delicious, Banh Mi Boys is a must in Toronto’s downtown core.

And an honourable mention goes to Dineen Coffee.  I didn’t eat here but I have passed this cafe hundreds of times and never gone in – until my trip in February.  It’s in a beautiful old building in the downtown core on Yonge Street but is bright and cheerful and feels incredibly spacious inside.  And they made me the best Chai Tea Latte I’ve had in a very long time.  I didn’t actually work in the cafe and every time I’ve gone in since, it’s been too busy to find a table to sit at but I will definitely give it a try next time.

Anywhere in the downtown core of Toronto that I’ve missed and should really make an effort to get to?  Let me know in the comments!