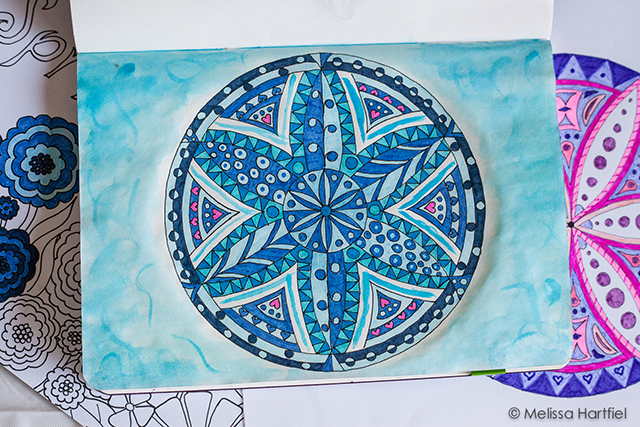 This week in the studio I thought I’d share a couple of things I’ve either finished up or am working on and… I have a colouring download for all of you!  (that is a sentence I never, ever thought I would write!)

First up, a quick update on the #100DayProject that I started on April 6th.  I chose to do 100 days of 10 minute doodles and as of writing this, I haven’t missed a day (but have come close!).  It’s a little harder than I thought it would be.  Ok, a lot harder! Haha.  Here’s a quick review of 12 days so far: 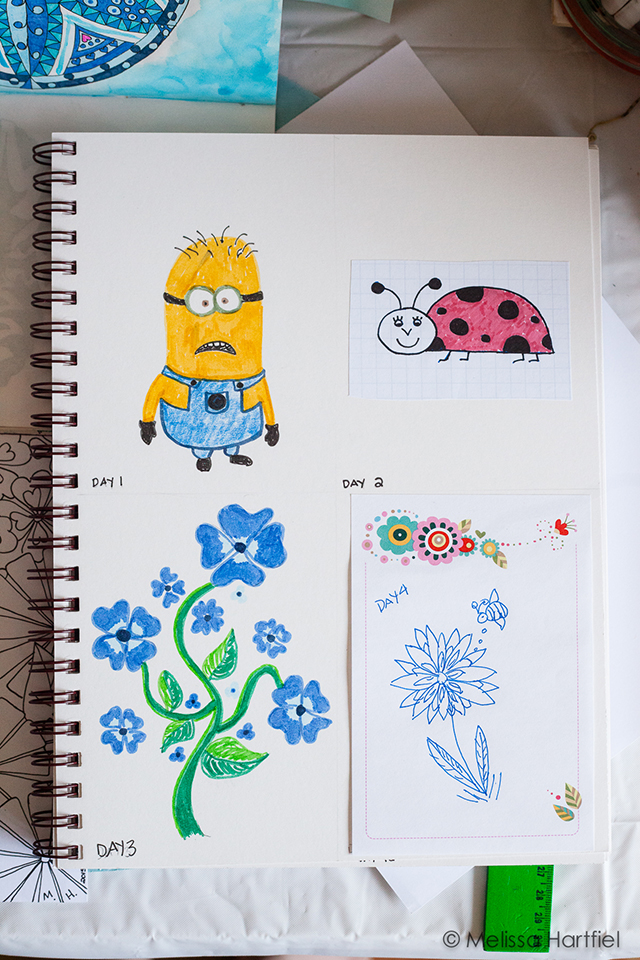 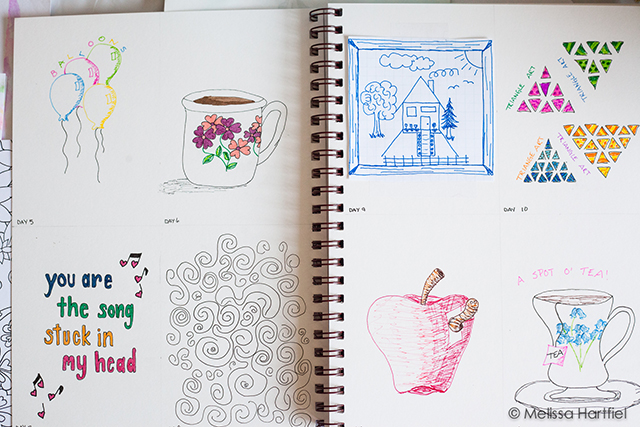 I somehow thought I’d whip up 100 super cute, perfect little doodles that would make my instagram feed a joy to behold.  Uhhh… no!

Doing anything perfectly in 10 minutes is pretty much out of my grasp! Which is ok.  I’ve gotten a lot better at dealing with that over the last 10 years.  However, putting something out there day after day that’s soooo far from perfect, on-line, in a space that I try to be very protective of because it’s important to me that it’s pretty, makes me super duper uncomfortable.  I knew it would but even I didn’t expect it to be this uncomfortable! There have been a few days where I’ve just cringed when it came time to hit the share button.  I’ve lost a few followers (and gained a few – all even steven).  But posting to instagram is part of the deal on this project and so I will post every single one of the 100, no matter how crappy or weird they are! 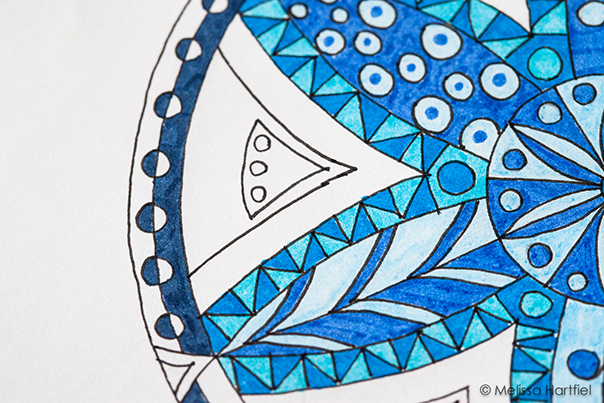 So that’s the “in progress” project.  The finished project is a small Mandala I was working on.  The finished version is at the top of this post.  I completed it with a watercolour wash, which I’ve never done before.  I like how it turned out! These are some closeups while it was still a work in progress. 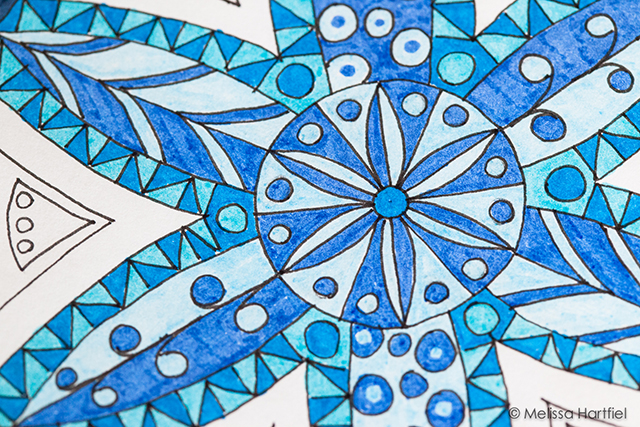 I’ve been drawing Mandalas for years.  They appeal to my sense of symmetry.  Not that you have to be super symmetrical but I tend to be!  They’re just something I like to draw when I’m watching TV or something.  And colouring them in after has always been rather soothing to me.

And that brings me to my last thought this weekend…

Every now and then it becomes apparent to me that I live in a bit of a bubble.  Last week I came across not one, not two, but three mentions of The Secret Garden and The Enchanted Forest.  They’re colouring books.  For grown ups.

I’d never heard of them and this completely floored me – for a couple of reasons.

Ok, so before I get into this, let me just say that I was the girl in high school who loved the map part of Social Studies.  Not because I liked maps but because we always had to colour them and to me, this was legit, sanctioned, colouring time where it was not immature or ridiculous for a teenager to be colouring with pencil crayons.  It was for marks.  I got credit for colouring in countries.

When I was younger – maybe 9 or 10, I remember friends of my parents visiting and talking about a girl they had been sitting next to on their last flight.  She had just graduated from high school and was off to backpack around Europe or something.  They were saying how they were having a nice conversation with her and then… out of her bag she pulled some pencil crayons and a colouring book and proceeded to start colouring.  She told them her parents had given them to her as a present after graduating.

I don’t know if the colouring books were intricate or more along the speed of a 5 year old.  But what I do remember very clearly was how all the adults thought this was very odd and there were questions about whether she was mentally fit to be wandering around Europe on her own.

All I could think was “why isn’t it ok to colour?”.  From that point on, colouring was a bit of a guilty secret.  But to be honest, half the reason I create doodles and drawings is for just that… so I can colour them in!

It’s incredibly soothing – both the act of drawing and colouring.  It lets my mind go, it helps me recharge, it lets me work out bigger problems and, it also lets me listen better.  I always doodle while on the phone.  Always!

It never ever occurred to me that people might just want things to colour – but obviously millions of people do!

I headed off to Chapters to try and find copies of both books to at least see what the fuss was about but of course, they were sold out.

But, because I totally get this grown up colouring phenomenon, and because these books seem to be sold out everywhere, I thought I would share with you my latest drawing, available to colour. 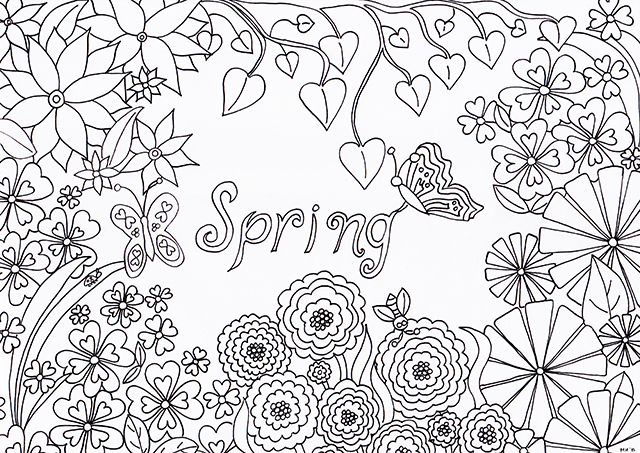 You can download my Spring Colouring Sheet here and print in on 8.5×11 paper and fill it in however you like.  All I ask is that you don’t reproduce it for commercial use – this is just for you to enjoy, if you wish, and colour at your leisure.

If you do decide to colour it in, I’d love to see your finished project.  You can drop me a note at melissaATfinelimedesignsDOTcom.  Or you can post it to Instagram and tag me (mhchipmunk) so I can see!

And with that, I hope you do something creative this weekend!