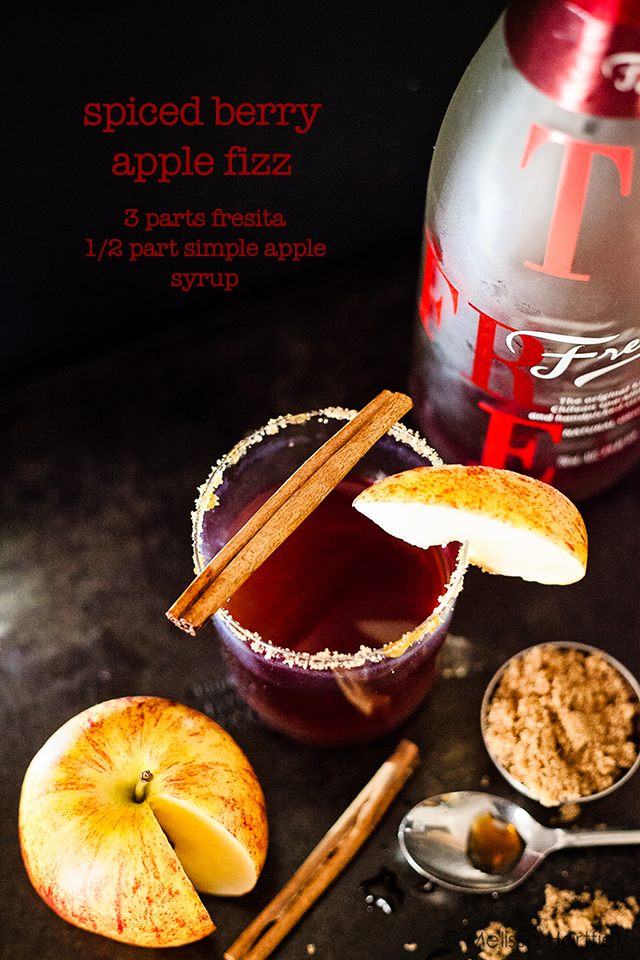 Last week I was bemoaning the fact that it felt like I missed summer.  I’m still bemoaning it!

Where did it go?  The sun disappears sooner every evening and while the days are still sunny and hot, the light has that watery golden glow that signifies summer is getting ready to say goodbye.  The nights have a definite nip to them and it’s time to start carrying a hoodie when you leave the house… just in case!  (and if you live in Vancouver, it’s time to put your umbrella back in your bag – it’s just a matter of time.)

But I love fall.  I think it’s my favourite season.  I vacillate between spring and fall – I think I favour whichever one is approaching.   I love sweaters and scarves and boots.  I love my winter coat.  It’s bright red and cheery in a city that’s plagued with winter rains from November to March.  I love fall leaves.  I love that Sam is a total camo dog when we go for a walk – completely blending in to the yellow leaves that are piled on the sidewalks.

And I love comfort food – soups and stews and casseroles.  Apple pie, pumpkin pie, concord grape pie… so much pie!  And  poached pears! And all the spices I associate with fall and winter:  cinnamon, nutmeg, all spice, cardamom, vanilla… all warm and inviting in a hot chai or hot chocolate… or a perfect fall cocktail. 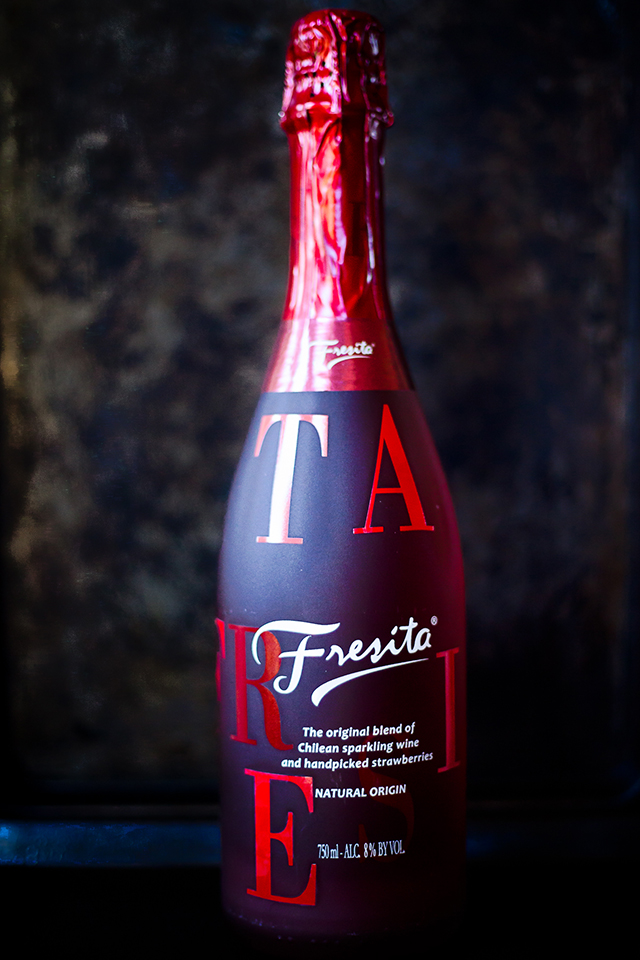 Fresita is a perfect summer drink… sparkling wine blended with strawberries that give it a brilliant red hue.  It just looks and sounds like summer in a bottle, doesn’t it?  But what to do with it when it’s not summer anymore?

It’s time to give it an autumn makeover.  And I can think of no better way than combining it with a classic fall fruit – the apple.

Add the comfort of brown sugar, cinnamon and vanilla, and a shot of vodka for good measure, and suddenly that sassy red bottle is showing her fall colours, ready for hanging out with after raking leaves or before Thanksgiving dinner or while while huddling up by a fall bonfire.  In fact, it’ll take you from autumn right through the festive winter season. 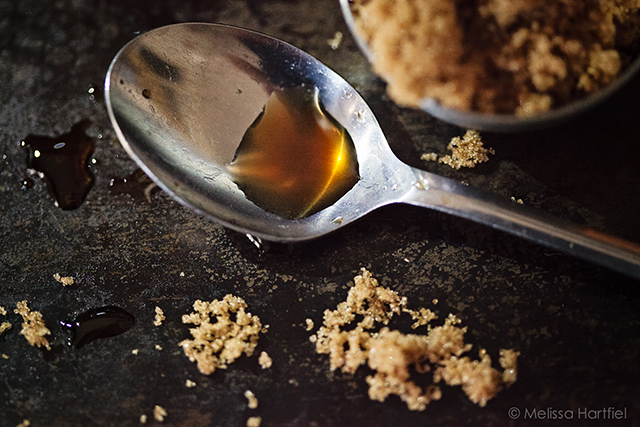 This was a simple idea, really.  While I was mulling over how to give Fresita a little fall makeover, my friend Laura suggested pairing it with apples or pears.  And then it hit me… a simple apple syrup… only made with brown sugar instead of white sugar, with a touch of cinnamon and vanilla.

The resulting syrup is a dark, rich caramel-y brown colour that tickles your nose with a spicy warmth.  The brown sugar gives it its colour and when it’s added to the Fresita it takes it from a brilliant summery red to a deep burgundy that cries out “fall is here!” 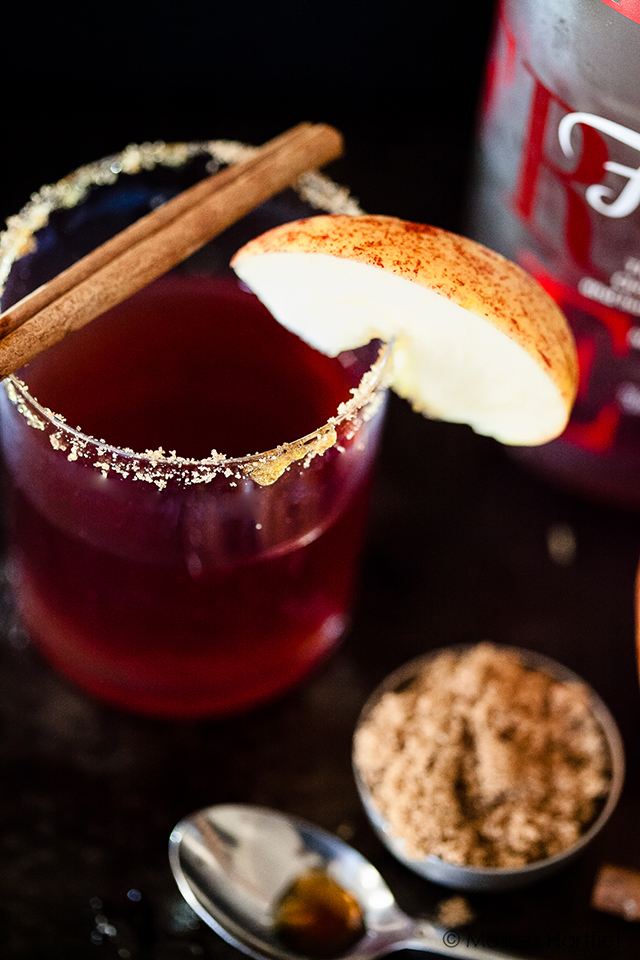 A little tip I learned about making simple syrups specifically for cocktails – add a shot of vodka to your finished syrup – this lets it keep longer in the fridge – up to three weeks.  Skip this step though, if you want to use your syrup for other things like pancakes or waffles (although, I still use if for those things even with the vodka!)

This makes a great cocktail but it would also work well as a self serve pitcher or punch for a larger party.  All you need is a bottle of Fresita (I found mine at my local BC Liquor Store – but make sure you look in the sparkling wine section, not the Chile wines like I initially did!) some apples, cinnamon, vanilla, brown sugar and water.  Pop the cork on that baby and make yourself one and a few more for some friends.  Then wrap up and find a bonfire and enjoy autumn properly!

As you’ve all probably noticed, I’ve been a little obsessed with photographing beverages this year.  I love the challenge they present.  This was a particularly tricky one – the deep red colour of the drink made it tricky against the dark backdrop, which seemed more appropriate to fall.  You will never guess how I lit all but one of these photos… with the flashlight on my Blackberry! More on that in a future post but it did the trick far better than a larger light source would have!

Disclosure Notice:  I was financially compensated and provided with product to create an original recipe for Fresita sparkling wine for the purposes of this post.