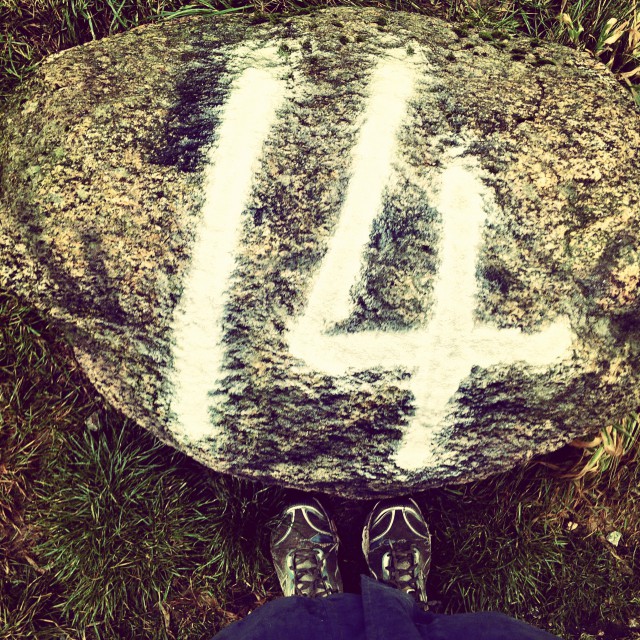 I spent an hour on New Years Eve sitting on the floor of my bedroom crying.  Crying so hard that Sam didn’t know what to do – just kept trying push his head under my arms and lick my face.

I just wanted the year to be over.  I didn’t even stay up till midnight.  I went to sleep, like a kid on Christmas Eve – hoping it would make the morning come faster and we could all just move on from the holiday season.

The problem is, you can try to sleep the year away but, it doesn’t make the reasons you were sitting on the floor crying at 10pm go away with it.

I’ll warn you now – there’s no food in this post.  It’s just me, trying to figure out where I am and where I want to go in the next year.  It’s long and rambly and if you make it to the end, well… I promise… my next post involves a recipe.  And beer 🙂

2013 didn’t feel like a good year.  It ended with me tired, burnt out and depressed.  I wasn’t sleeping or eating properly.  I wasn’t moving enough.  And I certainly wasn’t feeding my soul properly.  It was seeping into everything I did.  I like to think I’m normally a person who sees the proverbial glass as being half full and who, even when things suck, can find a lesson or a silver lining in the mess to take away.  But lately that was definitely not the case.

It took a few days after New Years and another meltdown about some Instagram silliness for me to realize that something had to change and I was the only one who could change it.

Well first of all, you have to figure out what’s wrong before you can fix it.  And second, you have to realize that you won’t fix it all overnight. Pretty obvious, right?

One thing that was bothering me was that I had been so busy that I hadn’t even had a chance to think back on the year.  In fact, the whole year was so busy I don’t even remember half of it.  That’s wrong.

Second, I felt like I hadn’t achieved anything at all.  Like I hadn’t done anything, been anywhere, seen anything…

And third, nothing was where I wanted it to be.  My businesses, my photography, my creativity, my life.

So what to do?  Well, I’m still figuring that out.  But as I’ve thought about it the past few weeks a few things have crystallized.

Slow Down and Savour the Successes

A lot of really great things did happen in 2013.  I was part of a team that put on Canada’s first food blogging conference.  My client roster expanded to people I never thought I would get to work with.  I got to take a fun food road trip with one of my bestest chums.  I got to be a judge for the KitchenAid Cook for the Cure Culinary Showdown.  And a long time acquaintance grew into an unlikely friendship that triggered a project that’s brought a smile to my face.

That’s some good stuff right there.  But as soon as one thing was over, it was drop everything and go at a mad dash to the next item on the list.  No sitting down and raising a glass to a job well done or putting my feet up and thinking about what went well.

No savouring the big or small moments.  I think of all the challenges for 2014, this one will be the hardest for me.  I don’t have a game plan for it yet. 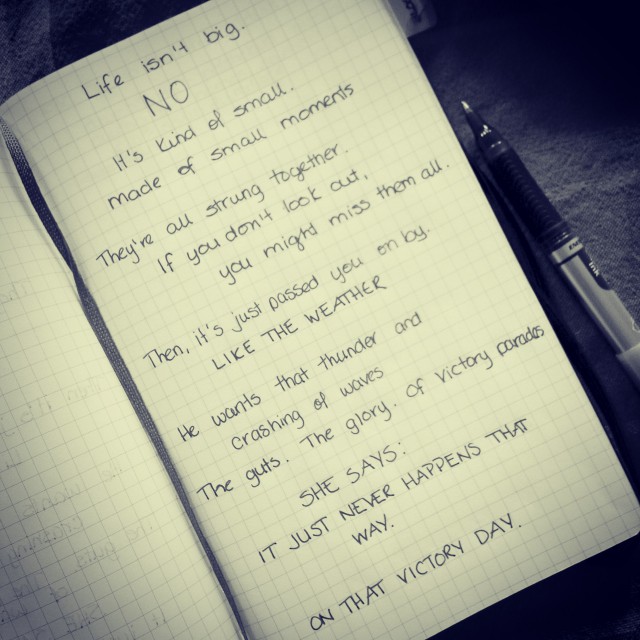 the lyrics to Tom Cochrane’s Victory Day have been rattling in my head for the last three months. Now I know why – time to listen.

Focus on Quality, Not Quantity

I’m tired of slapping up blog posts with the same old boring photos, or scrambling for a recipe just to get something up.  Screw it.  I started this blog because I loved to write, design, explore art and improve my food photography while trying to help others do the same.  I did NOT start it because I wanted thousands of readers or to make big dollars from this or to become a recipe blogger.

I don’t need to post 3x a week or even 2x.   And I’m not going to try anymore only to beat myself up about it when I don’t.  I’ll aim for once a week but only if it’s a quality post that I’ve put time and effort into and meets one of three criteria:

And for those, I need time – more time than posting 2-3 times a week allows for.

This blog has given me tremendous opportunities outside of blogging… and I’m convinced that was because of the quality of the work I WAS doing (but haven’t been doing lately). 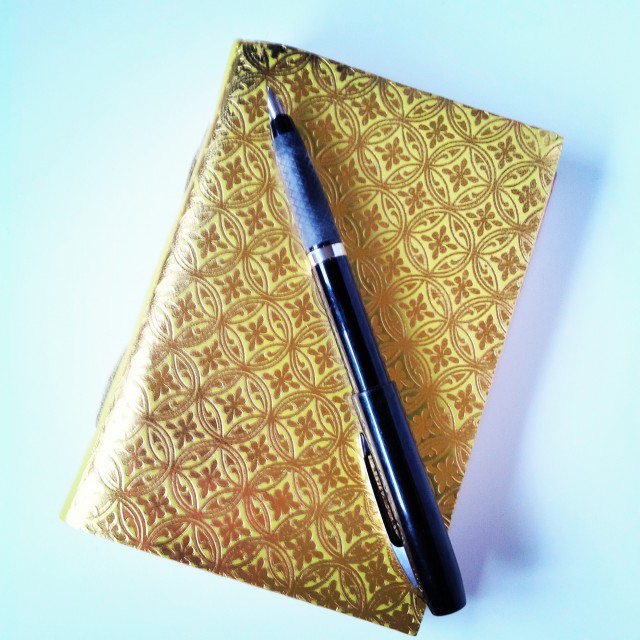 An Instagrammer I follow showed a photo of a bowl of memories on New Years Day.  She wrote down something good about each day in 2013 on a post it note and put them in a jar to be opened at the end of the year.  She said she loved reliving all the great things from the year.

Bingo! I started a journal a few days into 2014.  Each day the only thing I write in it is 3-5 good things that happened that day.  I wanted to be able to go back and read it throughout the year whenever I was feeling bad or defeated.

I have to say, only 3 weeks in, it’s already made a huge difference.  Funny how your brain remembers the good things you write down and let’s the bad stuff float away.  And, it helps with savouring those small moments.

Make Time For Myself to Create For Fun

I love going to Toronto.  I have family and friends there who share my passions for food, photography, writing, street art, and exploring.  I lugged my camera and lenses all the way out there on my December trip with grand ideas.  During my five day trip, I was so busy, I only took them out for a grand total of 2 hours.

It was the best two hours I’d had in ages!  My friend, K, offered to take me on a graffiti hunt to places I wouldn’t normally go on my own for safety reasons.  Despite the bone chilling wind he gallantly stuck it out for two hours, keeping an eye on me while I happily let go, forgot my surroundings and snapped away.  And then he treated me to ramen so I could warm up! 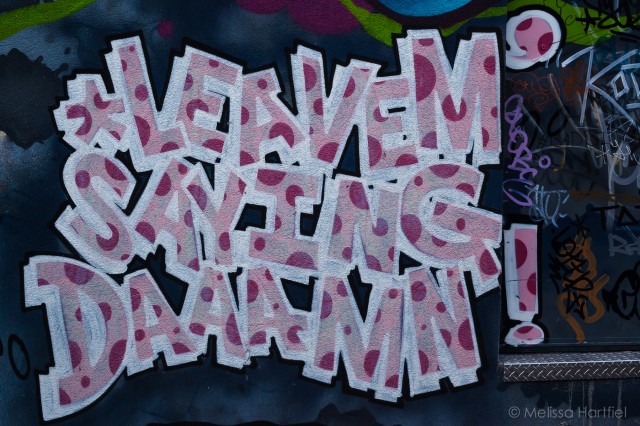 Like George on Seinfeld – leave on a high note so they want more. This might be my 2014 motto.

I also sat down for a drink with an ex-boyfriend who I hadn’t seen in over three years.  He was the one who urged me to go back to school to do design, who put a camera in my hands and explained how it worked when you took it off auto.  And the one who convinced me to open up that shoebox of stories I had written and illustrated as a kid and start doing that again.

And during that one hour we had to catch up, I remembered what it was like to have somebody who I could sit down and talk to about the stories I wanted to tell with a pen or a camera and feel like they were listening to me.   Like, REALLY LISTENING.  No glancing at their phone, or around the room or interrupting me mid sentence making me feel like my ideas were boring or silly and that I should just shut up and keep all those things inside.  It made me feel real.

It all signaled to me that I need to make more time to create for fun and not for a deadline or a client.  I love to doodle and sketch.  I want to learn more about hand lettering.  I want to write more fiction. I want to be more deliberate in my photography – to slow down and create photographs.  And, to finish off at least two of the million creative projects I have sitting on my hard drive this year. 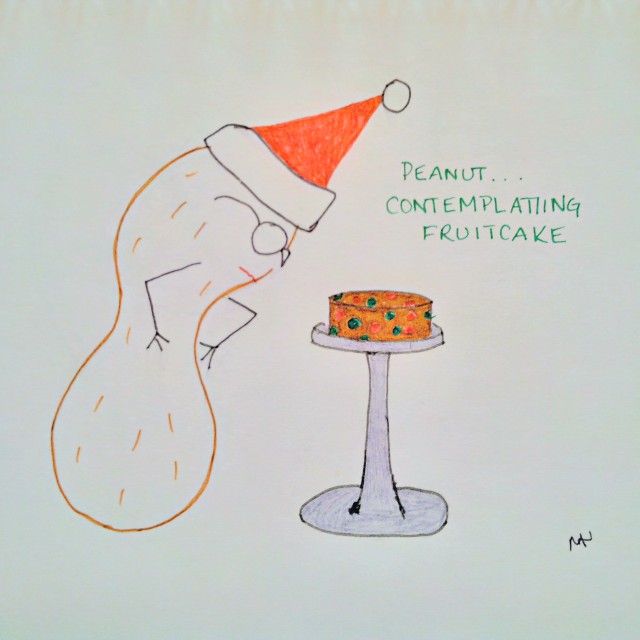 oh the peanut. I can’t tell you how much this silly project makes me smile!

One that I have finally got off the ground is The Peanut Project.  It’s a tumblr account I started in November after mulling it around for a few months.  The inspiration for it came from an unlikely place but it’s turned into something that makes me smile.

And last but not least, I have to stop giving a damn if people like what I create unless they’re paying me to create it.  I think that is my biggest downfall.  I don’t really have a plan for that one yet either.  I just have to trust that if I like it, there is likely at least one other person in this world of billions of people who will also like it.

And that should be good enough.