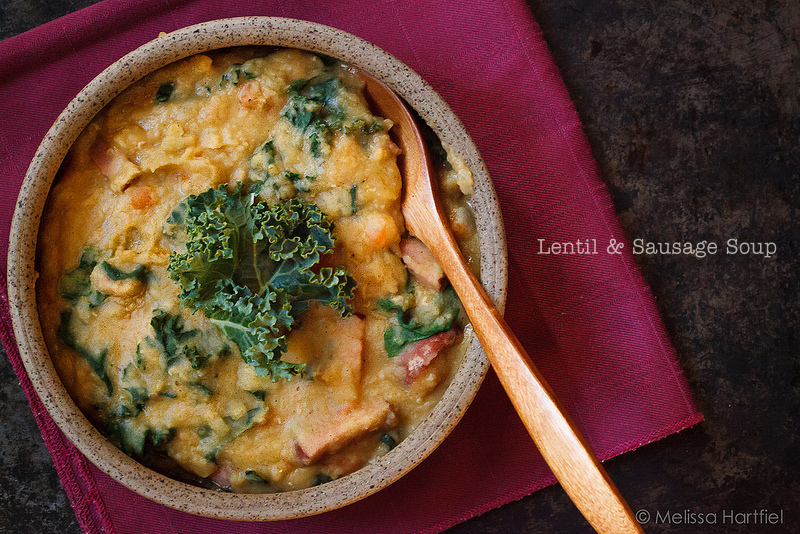 Happy New Year all.  I hope everyone had a happy holiday season, no matter how you celebrate it.

I do have a post coming on 2013/2014 but I’ve been procrastinating and pondering and trying to figure out a few things first.

In the meantime, I spent Boxing Day at my mom’s.  Sometimes, you just need to go to your mom’s for some soup and to have somebody reassure you, even if in not so many words, that you’ll figure it all out. 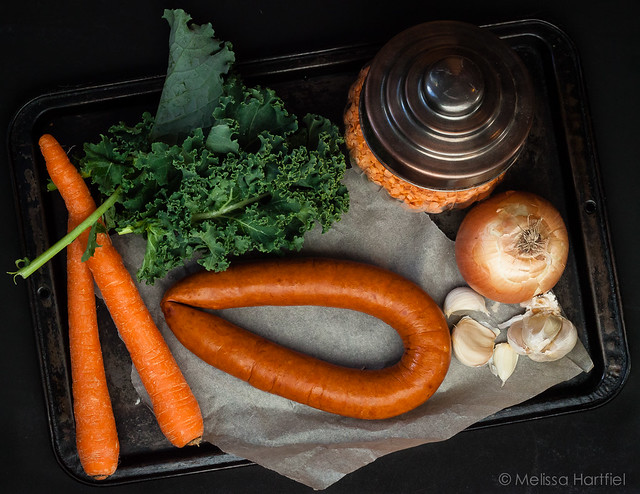 My mom decided to make soup and I’m going to be honest… when I saw what was in it, I was not terribly excited about it: lentils and… kale.  I know, kale is cool.  But I just don’t get it.  I’m much more excited that cauliflower is now the new cool thing because I loves me some cauliflower. 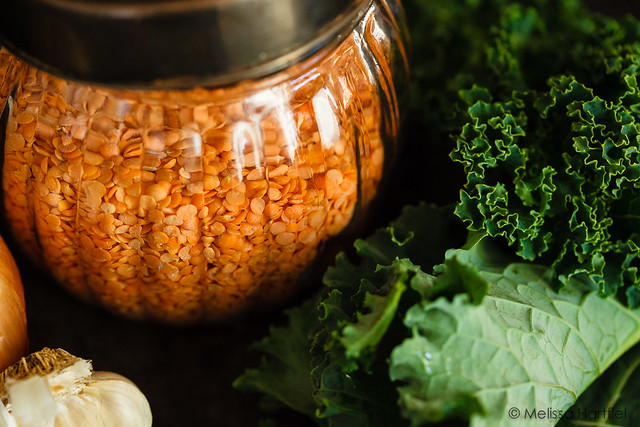 My mom has been eating stuff like kale and lentils and flax and what my younger brother and I call a “nuts & berries” diet, since we were little kids – waaaaay before it was cool.  When all the other kids were bringing Wonder Bread white bread peanut butter sandwiches and twinkies to school for lunch, my brother and I were eating homemade granola and homemade, oddly shaped bread.  We would have killed for a white bread sandwich and a twinkie just so we fit in.   Ah… the seventies and eighties…

Anyway, lentils… it’s not that I don’t like them.  They taste just fine.  It’s a texture thing for me.  Ever since I was a kid I’ve never liked foods that weren’t… juicy.  I don’t like things that have a grainy mealy texture.  I’ll eat them if put in front of me but I never cook them myself.
But you know, it’s your mom.  So you eat it.  And ok, but she sold me on lentils with this soup. 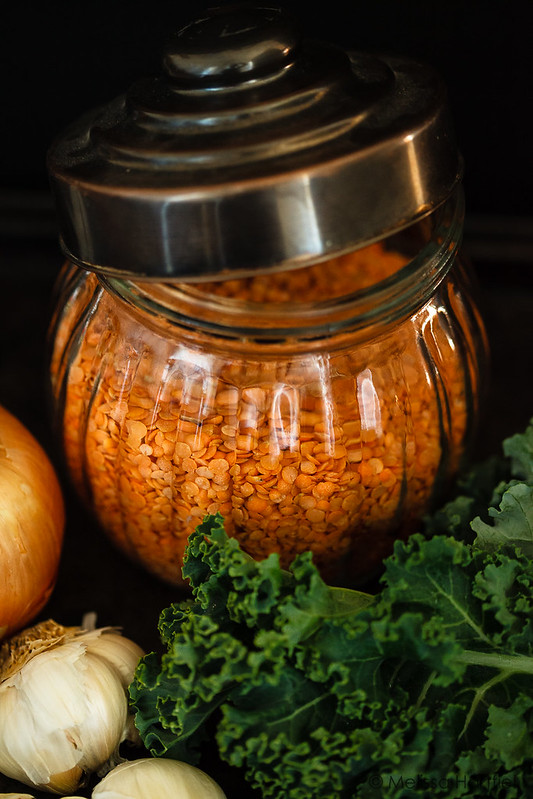 This was so good that I actually went out the next week and bought… kale.  Because the recipe called for it.   It also called for Italian sausage, which made up for the kale (you can also use spinach, which I think I will try next time because, let’s be honest, it’s not kale and I like the flavour better).

When I asked my mom for the recipe she laughed and said it’s the recipe on the back of the Safeway brand lentil bag.  And she plopped a bag of Safeway lentils in my hand and sent me home with them.  Umm… well ok then!

The one thing I will say about kale is, it’s beautifully photogenic.  I could have photographed it all day long! 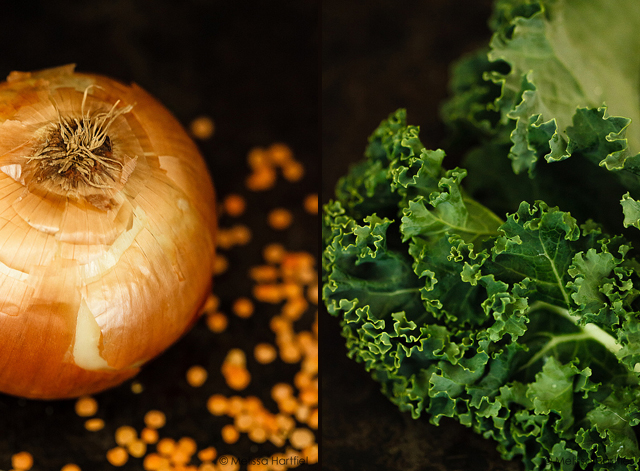 This is a hearty soup – almost like a stew.  And full of flavour.  Perfect for the miserable winter weather that has plagued Canada this January.  And while it’s not as cold in Vancouver as it is everywhere else, it is wet.  And dark.  And gloomy.  So make a big pot of this – it serves 8 and if you don’t have 8, freeze the leftovers like I did in individual portions for lunches.  Serve it with some crusty, oddly shaped homemade bread (or crusty, oddly shaped bread from the bakery).  Share it with your mom.  Your insides will be all warmed up and happy 🙂 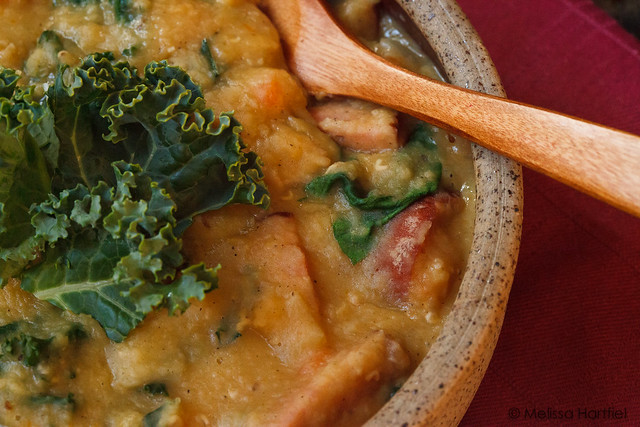 For those of you who may not have access to a Safeway or a Safeway bag of lentils, I thought I’d share the recipe with a few minor tweaks I made – mostly garlic because you can never have too much garlic and it helps keep vampires away.  Or zombies.  One of those things.  I can never remember.  But either way, it’s always good to keep zombies or vampires away. 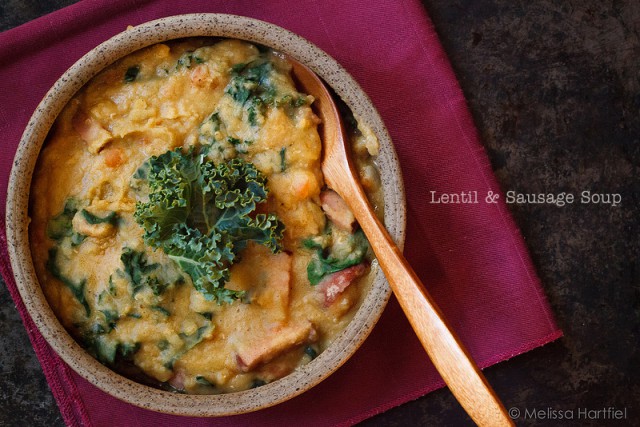 Print
Prep time
15 mins
Cook time
30 mins
Total time
45 mins
Author: Adapted from a bag of Safeway Red Lentils
Recipe type: Soup
Serves: 8
Ingredients
Instructions
Notes
this could easily be made vegetarian by eliminating the sausage and using vegetable broth instead of chicken stock
3.5.3226
47shares
The Art of the Leftovers: Turkey Pot Pie
Thoughts on 2013 and 2014 and Moving Forward