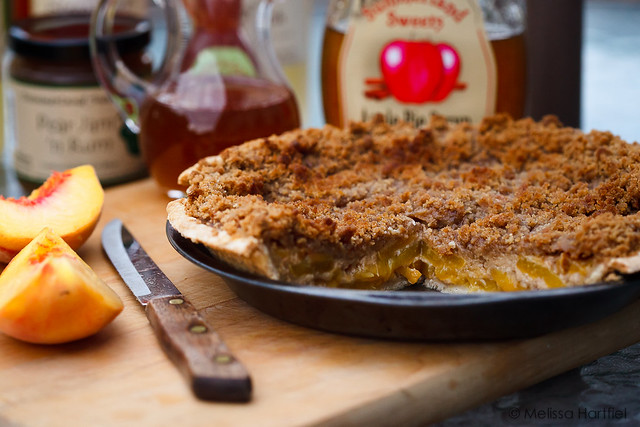 One of my favourite pies… scratch that… my very favourite pie, is my mom’s Sour Cream Apple Pie.  To me, it’s pie perfection – tender flaky pastry, succulent apples mixed with tangy sour cream and a perfect cinnamon brown sugar topping.  Autumn in a pie plate.  But then, then I saw Greg’s post for PEACH sour cream pie over on SippitySup and I started to think… why limit this perfect pie recipe to just apples when I have a fridge full of peaches??

Well, I couldn’t come up with a good reason so… I made my own version of peach sour cream pie from my mom’s apple pie recipe with a secret ingredient! (editor’s note: you do NOT need the secret ingredient for this to still be an awesome peach pie). 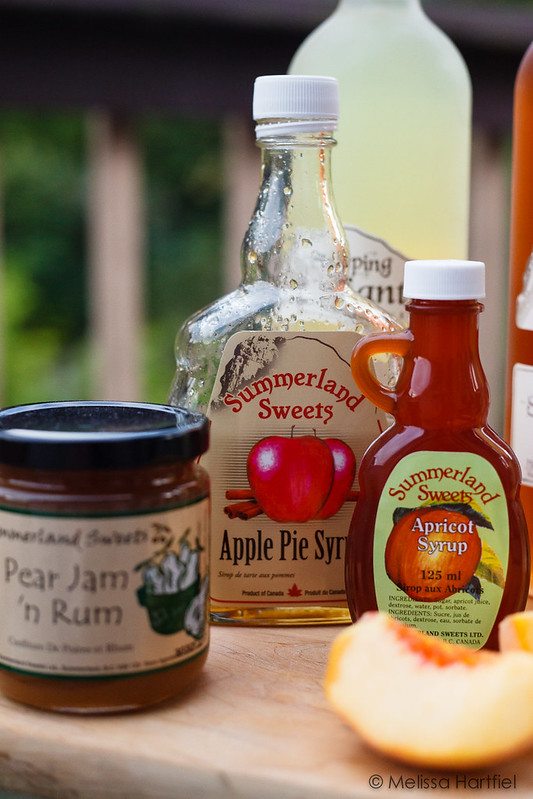 I mentioned our stop at Summerland Sweets/Sleeping Giant Winery in the Okanagan in my last post.  Ethan and I both bought bottles of their Apple Pie Syrup (seriously… best. thing. ever.).  I’ve poured it all over peach pancakes, vanilla frozen yogurt, peach compote, and even over cream cheese in a sandwich (don’t judge… just don’t… you haven’t tried the syrup yet)

Actually, after comparing notes with E on the weekend, I think it’s fair to say, that we’ve both been pouring that stuff all over anything that will sit still long enough to have syrup poured on it – which is a surprisingly large number of things!

The pie actually turned out really well  – not all fruits would work well in a sour cream mixture but this one did with a nice tang/sweetness contrast.

I sipped my first slice with a glass of peach wine from Sleeping Giant – and I’m telling you that as a shameless excuse to be able to add a photo of the wines I bought at their vineyard.  Because, honestly, aren’t they pretty all lined up?  I cannot wait to dive into the pumpkin one.  Pumpkin wine… who knew it would be so delightful!?  I can’t believe the mileage I’ve gotten out of our Okanagan Valley wine and food trip! 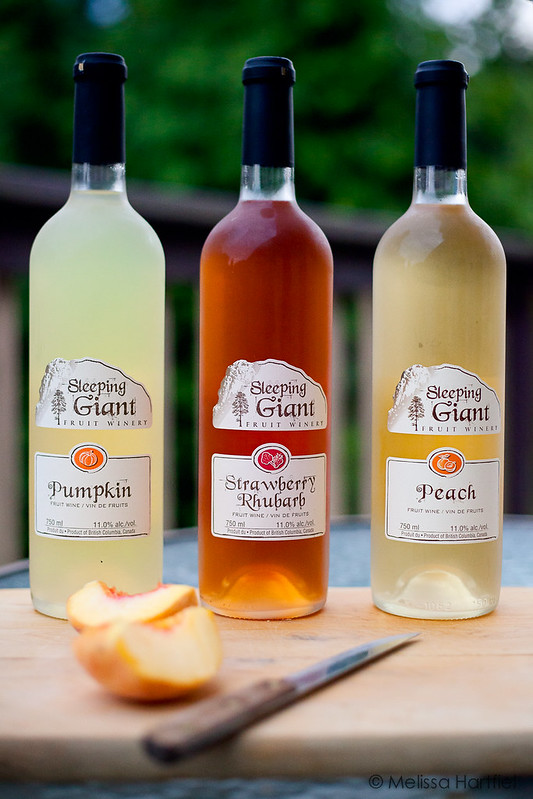 Anyway, on with the recipe.  As you all know if you hang out here regularly, I don’t do pie crust.  So, if you are like me and are cool with frozen pie crust, carry on.  If you want pie crust from scratch, then find your favourite recipe and go from there!  I decided to use cloves as my topping spice but you can easily sub cinnamon or, try the chai spice mix I use in a lot of my dessert cooking.

Oh thank heaven for summer evenings, right?  I noticed it was dark by 8:30 the other night and it made me sad… the afternoons will be dark and rainy all too soon.  All of these images were shot outside in the early evening on a slightly overcast day.  It was pretty much perfect outdoor shooting conditions: no shadow, no glare, no harsh light and everything looks so saturated.  I didn’t even bother with the patio umbrella or reflectors.  Just slapped stuff on the table and show a few photos.  You have to enjoy those days when you have them!  We’ll be back to reflectors, off camera flashes and tripods all too soon!

More of our Okanagan Adventures: