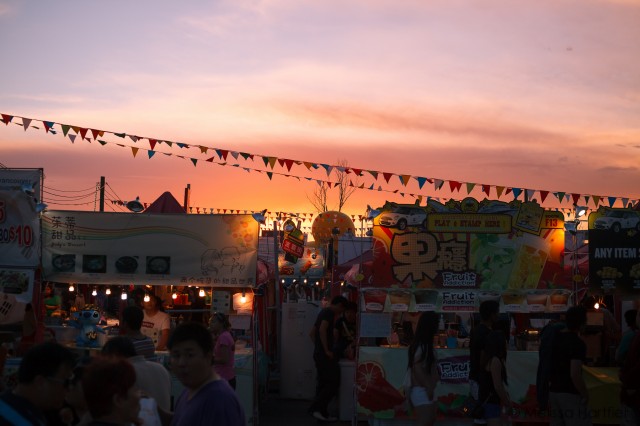 How many of you have an Asian Night Market in your city? If you do, you should go. It’s an experience!

Vancouver is lucky – we have three – two in Richmond and one in downtown Vancouver.  They are a total feast for the eyes, ears and, most importantly, the stomach. 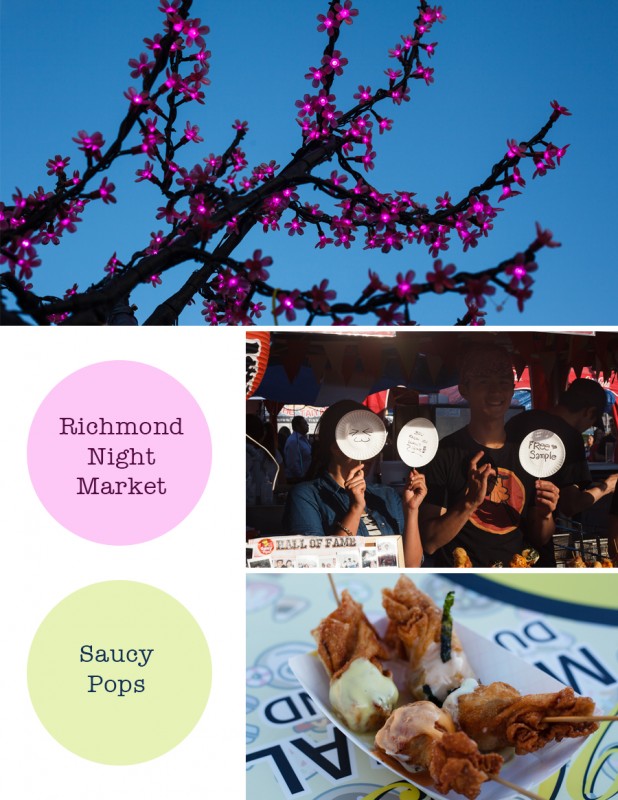 Last weekend, Food Husband Sean, Ethan, and I decided to hit up the Richmond Night Market, (not to be confused with the International Summer Night Market in Richmond) with the express purpose of sampling as much food as our wallets and our stomachs could bear.

The Richmond Night Market runs every weekend during the summer up until October 14th starting at 7pm and running until midnight.  (Sundays it’s open from 6pm – 11pm).  Admission is $2 and it’s easily recognizable by the giant inflatable yellow duck that sits at the gates, mimicking the one that sits in the harbour in Hong Kong (and other cities).  You can see it peeking out at the top of the first photo.

Nestled by the skytrain, the airport and the ocean, you can get some pretty spectacular sunsets while you wander the rows of vendors. 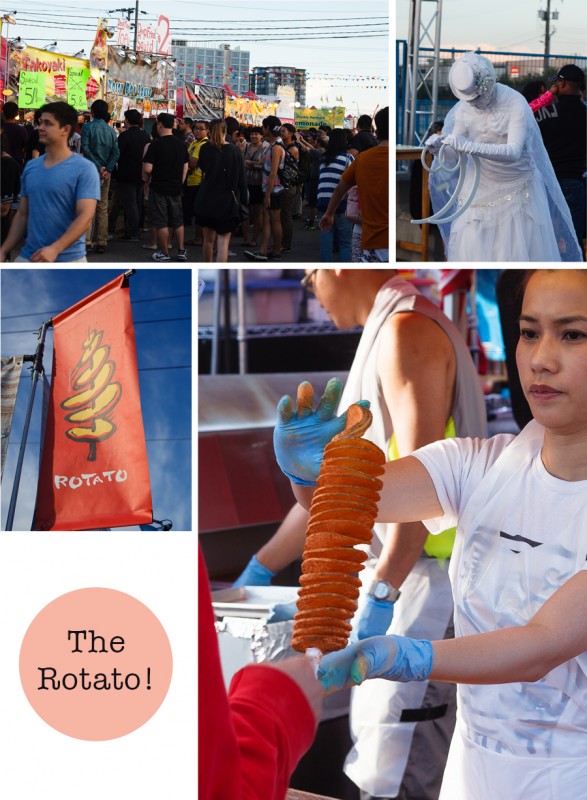 Ethan and I had been a few weeks earlier on the hunt for a new cell phone case.  If that’s what you need, this is the place to go.  Cell phone cases, iPad cases, socks, cute Japanese pencils, erasers, and stickers, dvds, balloons and stuffed animals and all kinds of other useless things that you get suckered into buying at fairs and markets.  Would I wish any of them gone? Not on your life – they’re part of the fun!

But this time around we wanted food.  And we did a pretty stellar job of it.  While I’m a girl with a healthy appetite, I couldn’t have sampled anywhere near as much food as I did without two healthy male appetites along for company. 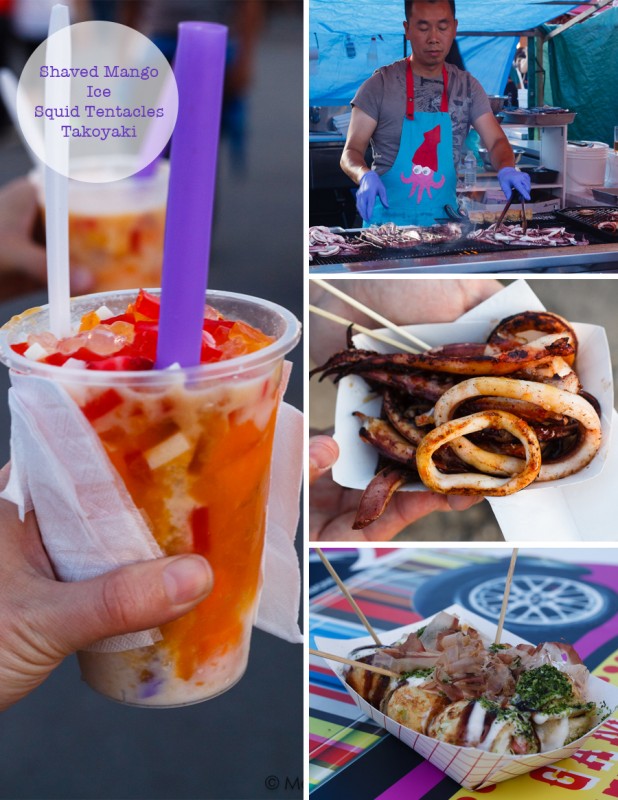 We tried everything from the Rotato – a spiraly cut potato dusted in seasoning and served on a stick, to Saucy Pops – chicken deep fried in wonton wrappers and served on a stick with dipping sauces,  to takoyaki (also on a stick!).  We mixed in some kim chi nachos and some grilled squid tentacles, some siu mai dumplings (also on sticks) and topped it all off with mango shaved ice.  We split all the dishes except for the squid.  The boys tried it but I knew going in that I was going to have to tackle that one pretty much on my own.  I’ve always loved grilled squid so this was not a tragedy! 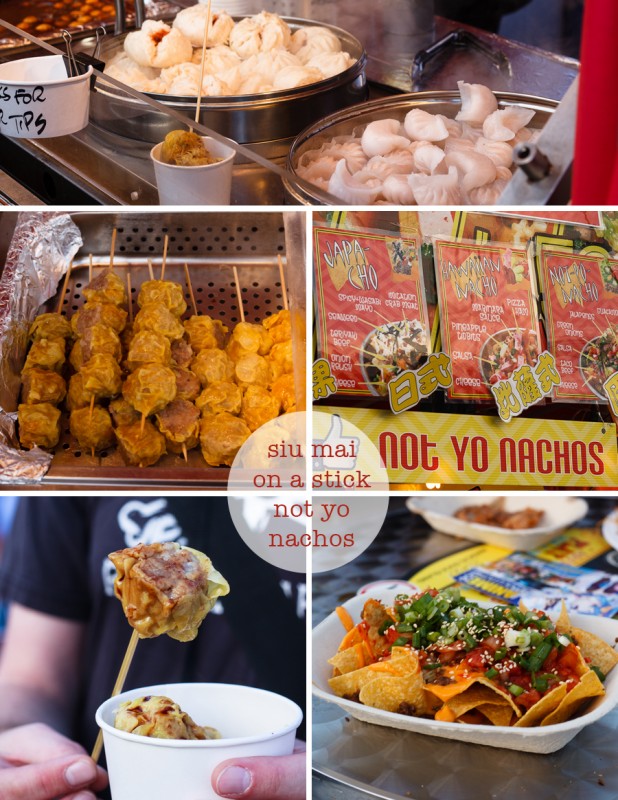 After the disappointing trip to the Food Cart Festival the previous weekend we were all very pleasantly surprised to enjoy all the food we tried.  If you’re going to pay $2 to eat at a festival, spend it here – it’s crowded but there’s no line to get in.  We always managed to find a space to rest our food and with it being at night, the air is cooler and it’s much more pleasant.  The variety of food is impressive (I was texting photos of everything we tried to a friend who replied with “they have EVERYTHING!!”.  You do have to wait in line at the vendors but most of the lines were quick and there’s just so many vendors that if one line’s too long, move on to something else.  It’s well organized and efficiently run.

If Vancouver is on your list of destinations this summer, then the Richmond Night Market should be on your list of places to visit.  It’s fun and full of food with lots of entertainment (even the people watching is worth the admission!) 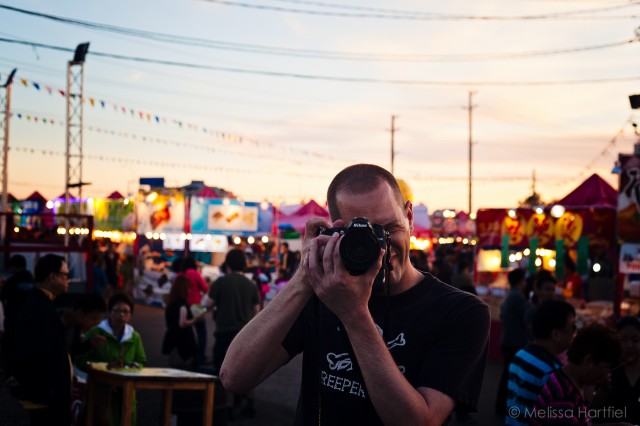