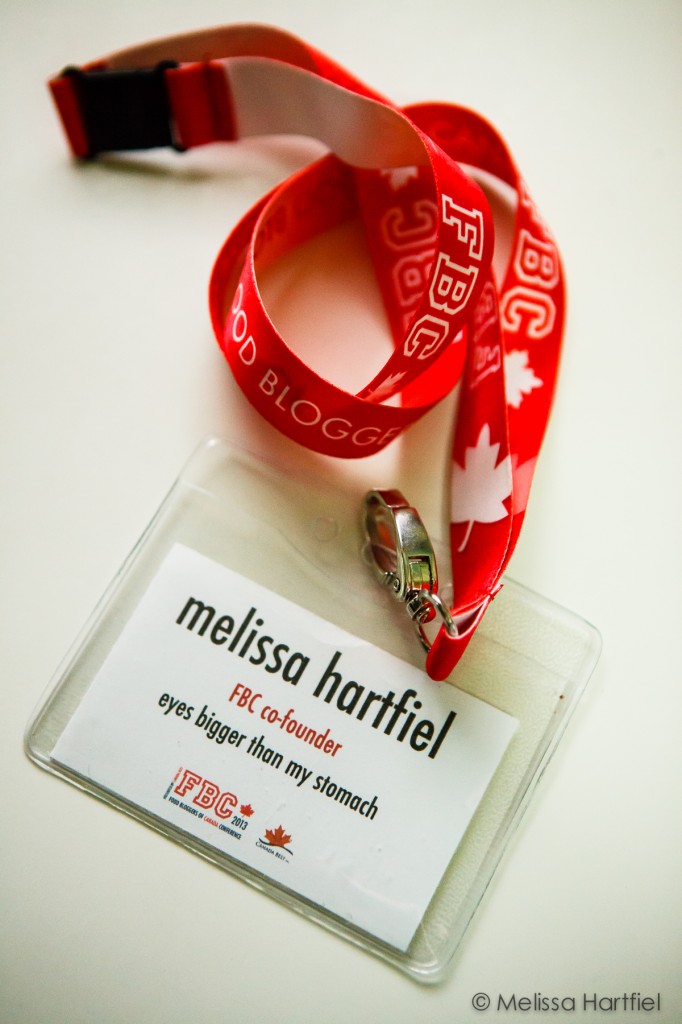 When you give birth to something you are passionate about, building, nurturing it, and shaping it to follow a vision is a labour of love.  Labour and love being the key words.

When you publicly attach your name to it and throw it out into the world and are a recovering perfectionist like I am, it’s downright terrifying.  When you are also a control freak like me and you join forces with two good friends in the process, it’s also fraught with potential minefields.

When we opened up Food Bloggers of Canada to the Canadian food blogging community in September of 2011, we had no idea what we were doing.  We thought we’d make this nice little space on the web where we could all hang out and maybe learn a thing or two.  Maybe… maybe if we were lucky, we would reach 500 members one day.  What a crazy day that would be.  Were there even 500 food bloggers IN Canada? (oh we learned how naive that was pretty fast!) 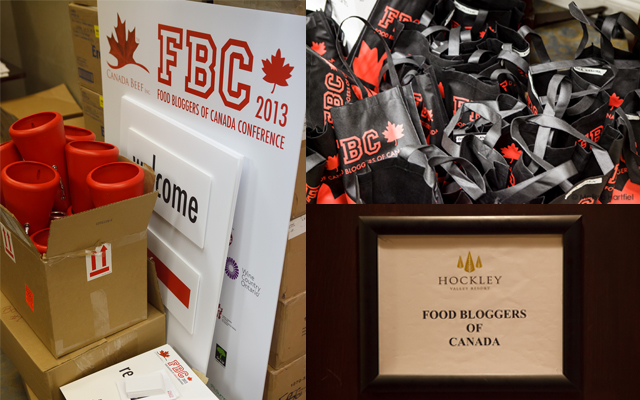 And then we hit member 100 almost the moment we were out of the gate.  I still remember it – it was my introduction to the lovely Stephanie Eddy of Clockwork Lemon – still one of my favourite blogs and one of our conference panelists.  And suddenly, we had sponsors wanting to work with us and we had to scramble around to figure out how to make that happen.  And then we had more members and had to find content.

We agonized over decisions: who to ask to speak, who to ask to sponsor, where to have it, how much to sell tickets for, would we have enough money to pay for it and most importantly… would anyone come??  There were a million smaller but equally important decisions to make as well… what to serve for dinner, how to get volunteers, who to do our AV, all the little details that make or break a conference.

We got crash courses in negotiating contracts, working with big brands, PR firms, agents, and people we looked up to immensely.

We fought.  Yes.  We did.  Believe it or not, Melissa, Ethan and Mardi are not all sweetness and light all the time.  Not even close despite what you might think from our social media accounts or our blogs or even meeting us.  We all have wicked tempers and sharp tongues.  We are three very different personalities but we are all equally passionate about FBC and with passion comes emotion.  It would scare me if we agreed all the time and probably mean we’re doing this wrong.

As we got closer to the date we had even shorter fuses and wandered around in a state of exhaustion and queasy stomachs.

And then it was the week of.  And things started falling apart.  Yes, you heard me right.  It felt like everything that could go wrong did.  Ethan called me two nights before our departure at 10pm to say he was completely and utterly defeated and was going to bed.  I knew exactly how he felt. 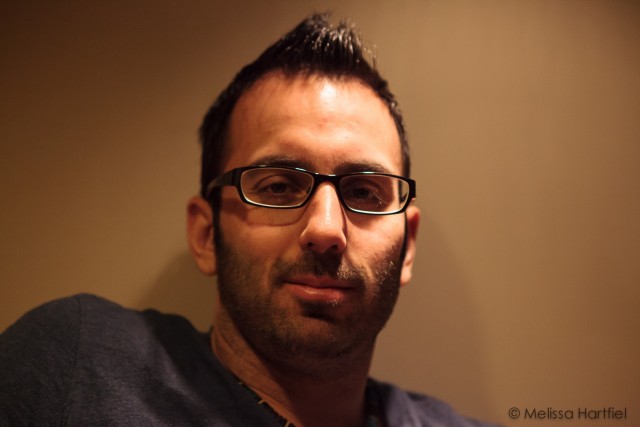 a pretty worn out Ethan

The next night we checked in on-line for our flight only to discover that the aisle and middle seat we had chosen together so we could work on the way to Toronto, were, in fact, two middle seats 6 rows apart.  I’m hugely claustrophobic on planes and the thought of being squashed between two people I don’t know literally sends me into a massive irrational waves of panic and anger.  I started to cry and couldn’t stop until I fell asleep. Everything was going wrong and I couldn’t even sit next to Ethan on the damn plane.  It was a small silly thing but it felt like the last straw.

That was, until I was driving to the airport at 5:15 the next morning only to see my phone lighting up with long distance numbers I didn’t know and twitter notifications.  Flights into Toronto were being cancelled and delayed all over the place because of an ice storm.  Half our volunteer team, most of whom we were going to pick up at the airport when we landed, was going to be late… Of equal concern was the fact that our flight was still on time!

On time it was and it wasn’t until we started our descent into Pearson airport that things got a bit dicey and we had an aborted landing in the midst of hail and ice we could actually hear hitting the plane and snow we could see.  I’ve never had an aborted landing before.  It’s pretty scary.  Your stomach does things it shouldn’t. 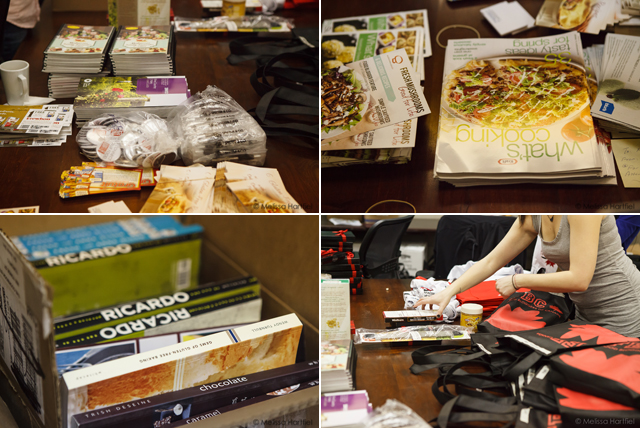 On the ground things got better.  Janice had manged to get on a different airline and made it in time to meet us.  Deb got herself to the airport from Markham.  Michelle was delayed in Edmonton until 1am that morning.  Kathy was finally en route from Halifax.  Kathryne was stuck somewhere in northern Manitoba trying to get home from another trip she had been on.  But, the roads were clear and there was no ice, snow or rain coming from the sky.

We made it to Hockley Valley, where we met the incredible team we had been working with for the last 12 months.  They are as much a part of making the conference a success as we were – they actually knew what they were doing and made sure we looked like we did too!

Our team continued to trickle in.  Aimee and Danny drove in from Montreal, Calantha had a white knuckle drive from Elora late that night.  We stuffed SWAG until 11 and then sent them all to bed while Ethan and I sorted out seating charts  till 1am.

The next morning we woke up to a fairyland of ice and snow with rain.  The roads were frightening and the rain froze as the day went on.  But Michelle had arrived and then Tiffany and finally Kathryne.  We stuffed SWAG and lanyards and prepped signage and centerpieces. 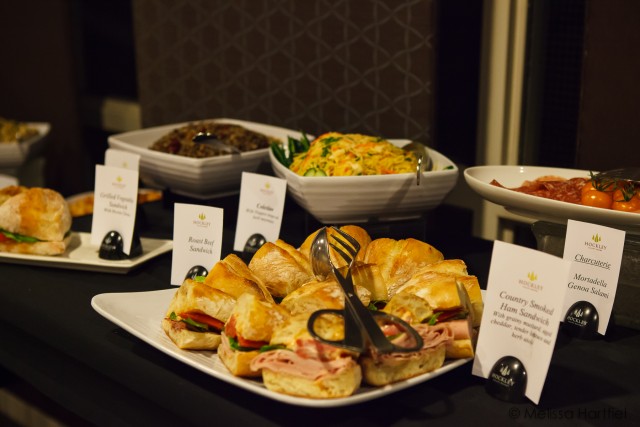 And then… then the power went out.  Not for 5 minutes.  For 3. 5 hours.  We had 120 guests arriving for a sponsor cocktail party, a sit down dinner, a keynote address and a movie night demoing KitchenAid blenders and making milkshakes.

It was one of those moments where Ethan and I told everyone it would be fine, no problem, it’s all under control. And then we yanked each other out into the hall and said to each other “what the hell are we going to do???”

But, you know what? It all worked out.  As things tend to do.  The Hockley staff were stars.  After speaking to them our fears dissipated and we were as calm as they were.  It wasn’t the end of the world.  People would understand.  We had options.

The power came back just in time for cocktails with our fabulous sponsors and Mardi made it in from Toronto after having to work all day.  The music turned on, people poured in and munched and sipped and started to laugh and have fun… the noise level rose and suddenly, I knew we could breathe.

The weekend is still a blur to me.  I can’t wait to see the recordings of the sessions when they arrive next week.  Maybe that will make it seem real because right now, it doesn’t.  I can’t believe we trended worldwide on twitter.  Not just in Canada, but worldwide.  Huh.  Weird, eh? 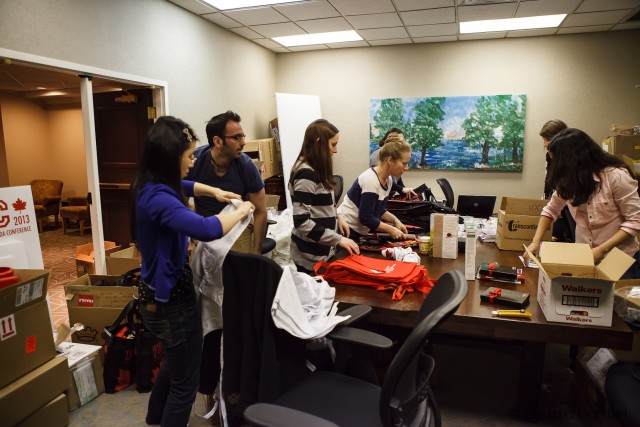 These are the only pictures I had the opportunity to take all weekend – behind the scenes on Friday!

So, in the spirit of a good post conference list… here’s my ten things that stood out:

Will we do it again? Time will tell.   We have full-time jobs that need our attention and family and friends who have been badly neglected and need to have us back for a little while.  And we have other FBC things up our sleeves that we want to have happen first. We still have 860 members who DIDN’T come to the conference who need some attention.

But first and foremost?  The three of us would just like to sit down and have a beer together – we haven’t had a chance to do that yet.  And I think we earned it. 🙂