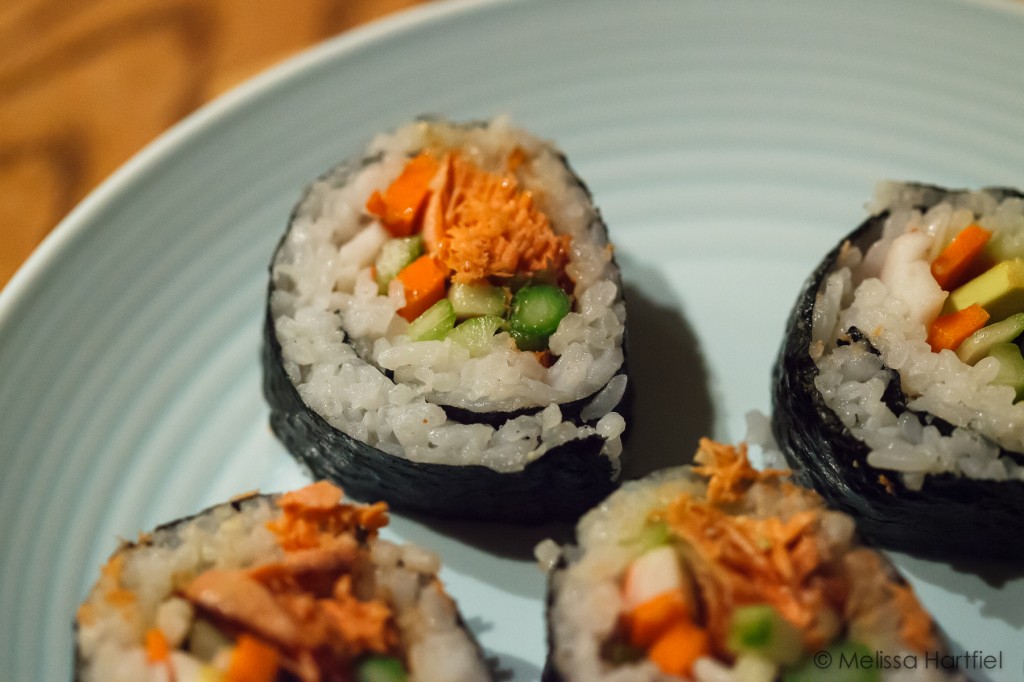 Back in January I was feeling a bit sorry for myself.  As I mentioned before, it was Fine Lime’s 3rd birthday, which happened to fall on a Friday and I wanted to go out and celebrate.  Nothing fancy – just a few drinks and nibbles with good friends.

I don’t like birthdays and I don’t often do much for them but I do believe that they should be celebrated on the day they land.  I hate this “drag it out for days or weeks” business.  It’s a birthDAY.  But this one was special and I really wanted to do something for it.

And then the Divine Ms N came to the rescue and gave me a shopping list and an arrival time at her house and said we would make sushi and drink wine and have a birthday party. 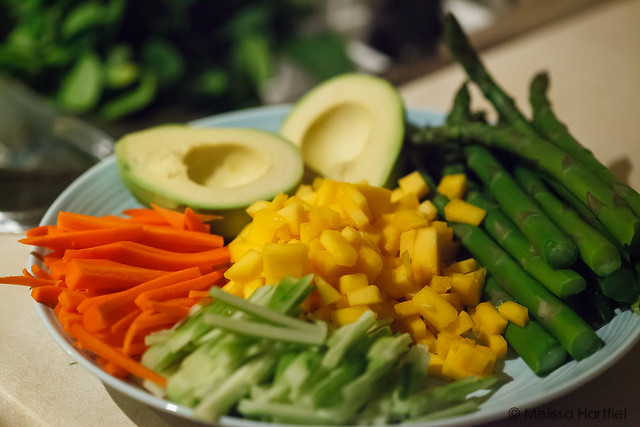 Ok, I’ve drank wine many, many times.  I’m quite good at it.  And I practically live on sushi, but… I’ve never made it! And neither had she!  So, this promised to be a very interesting evening – we also had a very curious two year old and the very rambunctious Charlie Dog (Sam’s doggie companion friend) to contend with while attempting this!  But we were both very game.

We decided to make gomae, sushi rolls and sushi cones.  Ms N was in charge of the rice, the fish, the nori wrappers and the condiments and I hit up the green grocers for all the other bits along with some wasabi mayo. 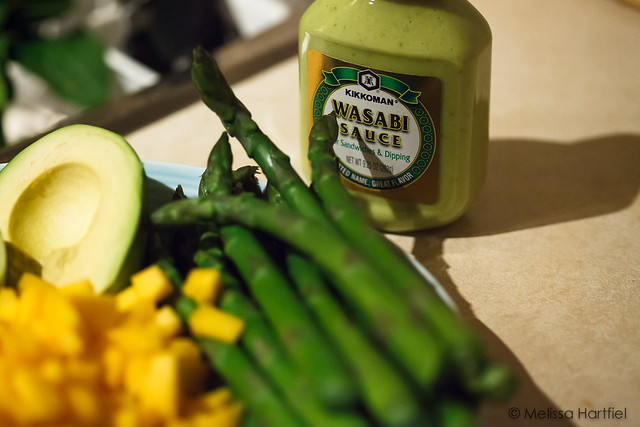 It was a pretty foggy and very cold night and when I rang Ms N’s doorbell I was greeted by her and little Miss A and a frantic “did you get my texts???”

Up we went to the kitchen where Ms N produced a bag of just opened sushi rice that sure enough… had bugs in it.  Not live bugs, mind you… but bugs none the less along with their weird little silky web stuff that they produce.

And so I was dispatched on foot to the grocery store (a moving van had parked behind my car) two blocks down the road and down a rather steep hill in cold, dark, foggy weather and…. my blackberry battery died en route.

Let me tell you, I went from one end of that grocery store to the other and didn’t find anything resembling sushi rice. Any other ethnic type food you might’ve wanted but no sushi rice.  I had people looking for it but to no avail and, of course, no phone to text or call with to find out what do as a substitute.  How on earth did we function before cell phones?? Probably just barely.

In the end, I settled on the only brand of short grain rice they had hoping it would work and then trudged back up the steep hill in the wet, cold, foggy weather.  (by the way, I know I said it was downhill on the way there but it really wasn’t.  It was totally uphill both ways… and it was 6 blocks back, not two…)

Ok, before I go on, I’m joking, obviously.  And Ms. N did offer me her car.  It was actually a refreshing walk but that really doesn’t make for a great story, does it? 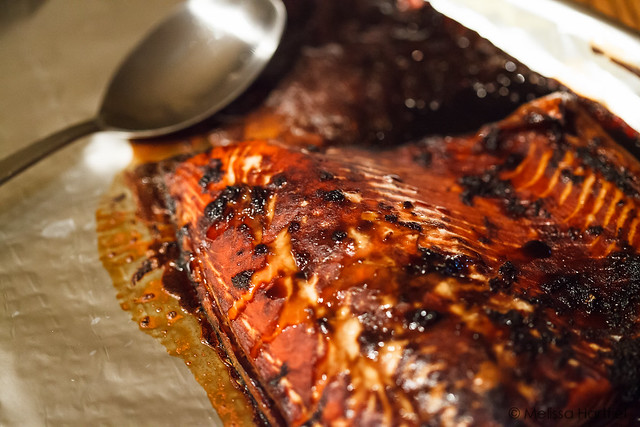 Fortunately, that was pretty much the end of the misadventures and by the time I got back Ms N had prepped all the veggies and the pollock (ok… we’re not ashamed to admit, either of us, that we like pollock and it’s way cheaper than crab and we’re no Ritchie Richs so deal, k?) and salmon.

Next step was starting the rice and mixing up the sauce for the gomae. 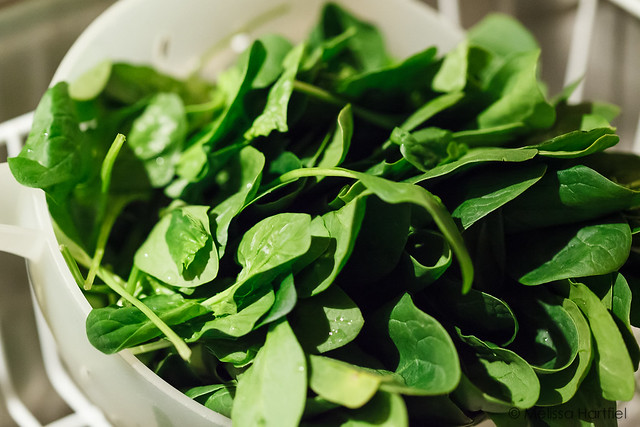 Gomae, if you’re not familiar with it, is cooked spinach dressed with a sesame dressing – sometimes it’s peanut and sesame mixed and in some sushi restaurants, it tastes like all they did was mix it with peanut butter.  However you make it, it’s one of my favourites. 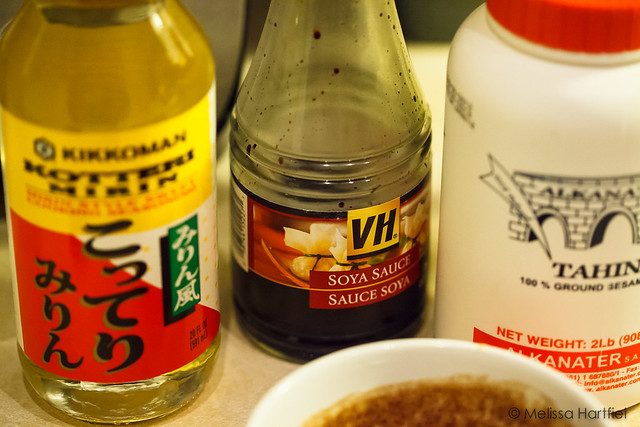 We went with a sesame version that mixed tahini, miren and soy sauce (recipe at the end of the post).  We were shocked by how easy it is to make and… it. was. sooooooo. good!  We wolfed it down so quickly it never even got its picture taken!  If you’ve never tried it, you have to – it takes about 5 minutes to make and it’s a great way to incorporate spinach into your dinner! 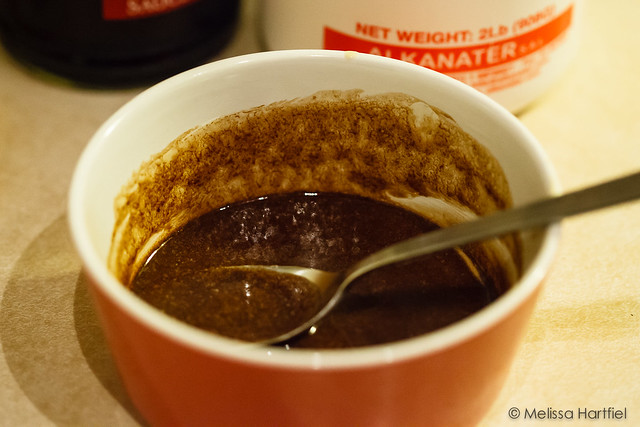 Prepping the rice was interesting – I had no idea how much work went into making sushi rice.  We actually followed a recipe from the Joy of Cooking and it turned out perfectly.  I’m not sure how much of our day was beginner’s luck and how much was just… well ok, maybe it’s just really easy?!

Once the rice was ready, we took the nori sheets and warmed them quickly by waving them over a hot stove element. Really – it only takes a few seconds (don’t put them ON the element – just wave them over it.)

And then it came time to start making our rolls.  We got some tips from Food Husband, who spent a semester in school making sushi.  He told us to use saran wrap between the sushi mat and the rice and to make sure we had a bowl of water nearby to dip our fingers into so they didn’t get too sticky while working the rice.  Excellent tips.

I went first, put the saran on the sushi rolling mat and spooned some of the sticky rice onto the saran and then worked into a flat square as best I could.  This was definitely the hardest part – the rice is really sticky and for that reason it’s hard to keep together – every time you take your fingers away, half the rice tries to come with you.  But I kept working at it and eventually had something that resembled a square and then I cut a piece of nori to fit it.

Sorry, no photos at this point – we were concentrating too hard and our fingers were way too sticky!

Next up was filling the Melissa roll –  narcissism be damned – and I remembered my brother’s warning to fill it with less than you think you need.  So what goes in a Melissa roll?  Salmon, mango, avocado, asparagus, cucumber and wasabi mayo.  The part I was the most nervous about was rolling it but I just took it slow and used the saran wrap to help me keep it really tight without getting my hands on it (this kept the rice from pulling apart).

It turned our pretty good, eh? 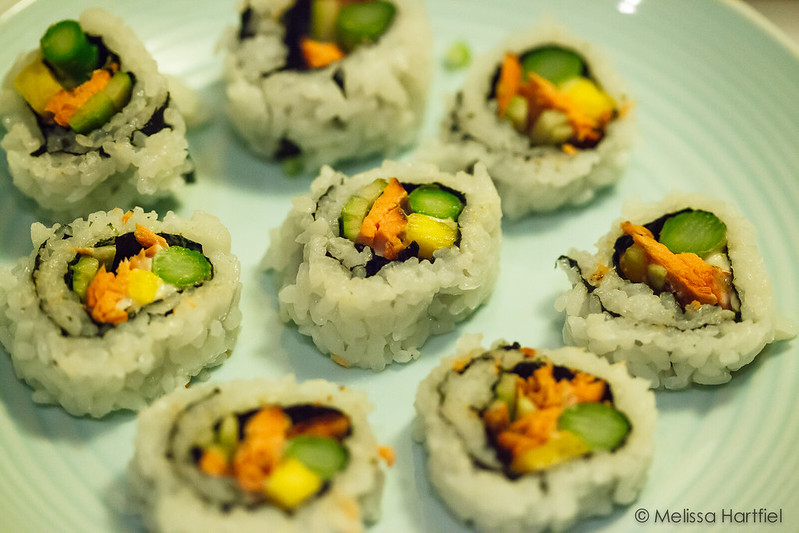 Not bad for a first try! Not bad at all.  The only thing I noticed was that I could’ve put more in than I thought – I think I was so worried about over filling that I underfilled and didn’t get the roll as tight as I should have.

It tasted awesome.  Ms N had baked the salmon in a brown sugar soy sauce glaze and it was perfect next to the mango.  We mixed some wasabi and soy sauce to dip in and… omg… YUM.  I’m not even using my words here because it was just one of those moments where you take that bite and think… woah… that was worth all the work!  Plus, the fact that you made it yourself automatically makes it taste 1000x better!

Next up it was Ms N’s turn and she made an avocado roll for her daughter and then made herself a roll with the nori on the outside.

We did really well – my next roll was the Melissa Deluxe with pollock, salmon, asparagus, avocado, cucumber, mango and more wasabi mayo.  I liked that one so much I made two of them!  Neysa followed up with a hand roll (or cone) made with more nori. 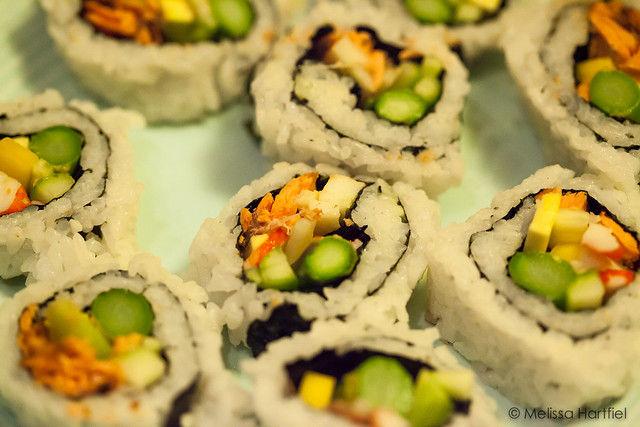 What shocked us about the whole thing was how much rice we ate! There is a LOT of rice in a roll of sushi – way more than you think you’re eating because it’s so tightly packed.  Woah.  But we really didn’t care at that point – the wine helped with that too!  And it’s very easy to see why sushi chefs are called masters – it is an art form, no doubt!

Then Miss A was put to bed and we ate homemade cookies and apple sauce cake and black forest danishes while drinking wine and tea and then watched Dragon’s Den with Ms N’s husband.  It was a pretty great way to celebrate a birthday!

And so, to the Divine Ms N – thanks for cheering me up and giving me such a fun night – sushi rice bugs and all! 😀