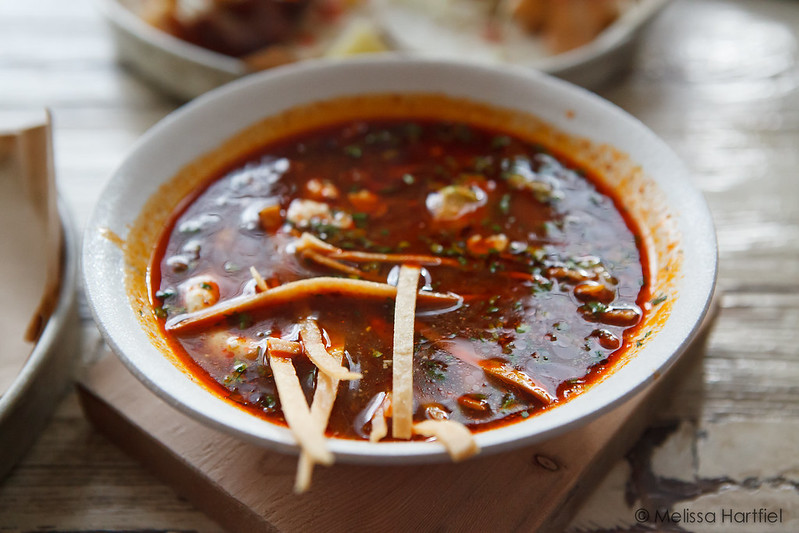 Back in late spring of last year,  I tried out a little Vancouver street food truck on the recommendation that they had the city’s best fish tacos.  The truck was called Tacofino and, they were indeed the best fish tacos I’d had in Vancouver.  Crunchy, lightly battered fish with remarkably fresh toppings.  I ate it with great gusto sitting on the art gallery steps on a surprisingly warm May day.

I think about that fish taco a lot: 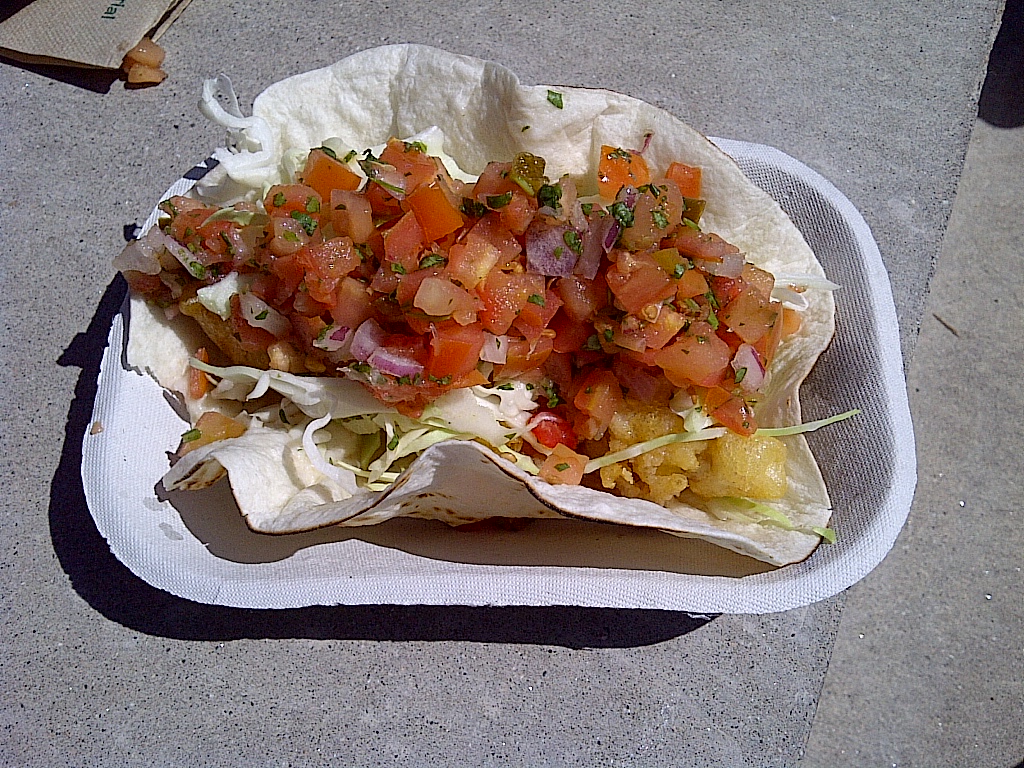 And then, rather randomly, two weeks ago, Food Husband Sean and I stumbled across Tacofino’s new storefront commissary location on East Hastings St while checking out yet another chocolate stop for the Vancouver Hot Chocolate Festival.  He pleaded with me to go in and have brunch.

Ok, pleaded might be an exaggeration.  He might have said “you wanna stop for tacos?” and I might have said “if it doesn’t involve chocolate in any shape or form, ok.” (I can’t believe that I was actually sick of chocolate!)

You see, Food Husband writes the Eat Street Vancouver Blog for The Food Network and he wanted to do an article on Tacofino making the leap from food truck to a sit down location.  So, in we went.

The walls are whitewashed.  The tables are long, wooden and communal.  The light fixture is the craziest I’ve ever seen, spreading all across the ceiling like tangled up copper spider webs with plants growing out of light bowls.  It’s a funky mixture of rustic and spartan with a touch of hipster thrown in and impressive bar at the back.

I honestly wasn’t expecting much.  I wasn’t feeling too hot (too much chocolate) and I all I wanted was a glass of ice water and a place to sit.  I didn’t even bother to pull out my camera. The ice water arrived before I even had to ask, in a big glass jug just for us to pour out as we wanted.

And then I looked at the menu and pondered some pineapple jicama salad and thought maybe I didn’t feel so bad after all.

In the end, I ordered a pork jowl taco complete with chopped cabbage, pineapple, fried shallot and sriracha ($6) and an Azul smoothie made of blueberries, bananas, spirulina and almond milk ($5).  Sean and I split a pineapple jicama salad which was dressed with lime, chile, cilantro, and sea salt ($6) and he had the Masa Pancakes with chipotle butter, chipotle-apple leather, maple syrup ($11). 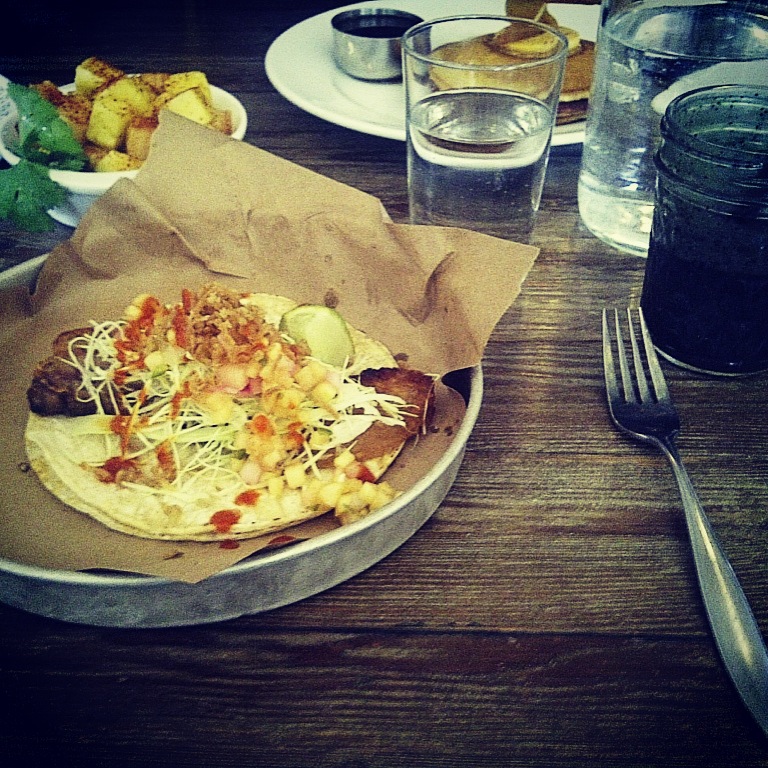 My taco was… well, it was as amazing as the aforementioned fish tacos I had sitting on the art gallery steps nearly a year ago – the pork jowl was like butter.  And the salad was that perfect blend of sweet, salty and citrusy – so good that I’ve been trying to recreate it at home all week with mangos (I’m close!).  Sean liked his masa pancakes and he was trying as hard as I was to dissect the salad ingredients.  We decided we had to come back for brunch again because I had been eyeballing our neighour’s masa toast (like a mexican eggs benny).

And go back we did! Just a few days later, only this time for lunch.  And this time, I was prepared with an empty stomach, a handy camera and a late lunch time so it wouldn’t be too busy.

As an aside, last week I received an email from a reader asking if I could give tips on shooting in restaurants – I’m working on a post for that but if you want a few tips check out Sean’s post for Food Bloggers of Canada on just that – he takes amazing restaurant photos! 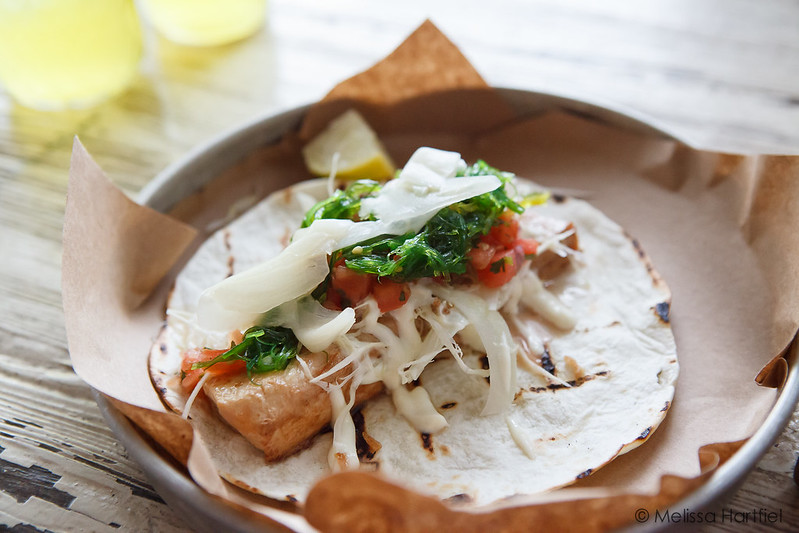 I went all out and ordered their signature dish, Tortilla Soup ($8) and the Albacore Tuna taco ($6) and a Mexican soda (Pineapple!).  Sean had the lunch special – two tacos for $10.  He liked the look of my pork taco on the weekend so much that he ordered one of those and a fish taco.  For dessert I had the Lime Curd Vaso ($6) and Sean had the Banana Churros with banana sriracha ice cream (yes! you read that right!) ($7).

Ok, I don’t review restaurants often but I had to write about Tacofino because honestly, it’s two of the best lunches I’ve had in ages.  It was worth the little extra jaunt outside of the downtown core where we usually stick too for weekday lunches, worth the sketchy bus rides and even worth a trek in from the suburbs where I usually hang out. 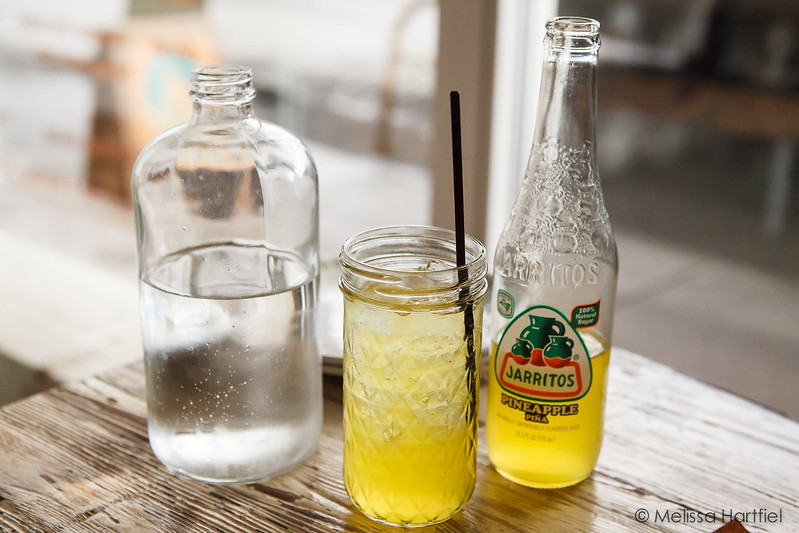 My albacore tuna taco was perhaps the best taco I’ve ever had.  You know how sometimes you are eating something so delicious that you slow down and take little tiny bites just so you can savour it for as long as humanly possible?  That’s how I ate my taco – Sean even laughed at me.  Seriously…I nibbled it trying to make it last.  It was the most beautiful piece of albacore seared in a sesame soy glaze with wasabi-ginger mayo dressing, shredded cabbage, mango salsa and seaweed salad all wrapped up in a soft flour tortilla.  It oozed delicious juice on the plate but I sopped up every drop of it with the tortilla as I ate.

My tortilla soup was love in a bowl.  I can see why it’s their signature dish.  Warm and nourishing full of fresh chopped cilantro and chicken and avacados.  If I lived in the neighbourhood I would probably eat this daily in the winter.  If they ever make it in giant containers to take home, I’m there. 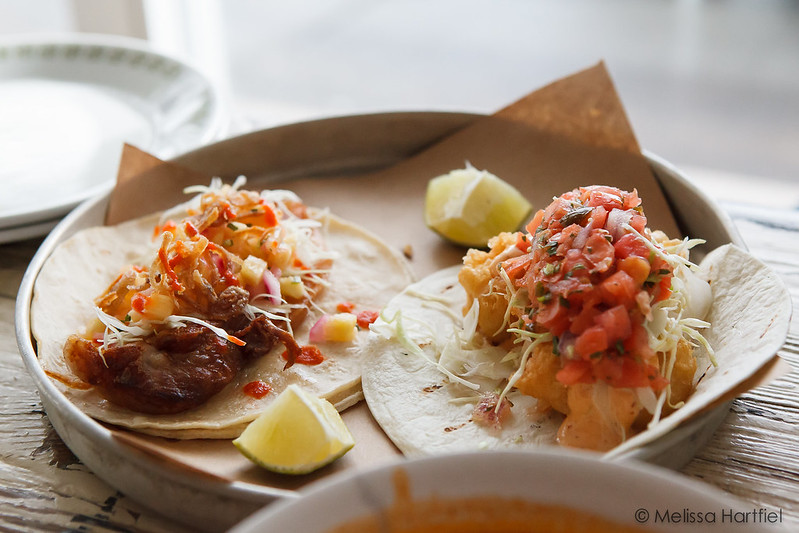 Sean was all over his tacos and wolfed them down long before I had finished nibbling on mine.  I think he was already plotting dessert before I was half done!

Dessert I was so so on.  I chose the lime curd vaso which was served in a little jam jar, topped with a layer of graham crumbs and then a layer of mascarpone whipped cream.  I love any kind of citrus dessert and the curd was beautifully smooth with the right combo of tart and sweet.  But I didn’t like the taste of the graham crumbs and found the mascarpone too rich.  The rest of the meal was so refreshing and light that it felt a little too heavy and in the end I didn’t finish it. 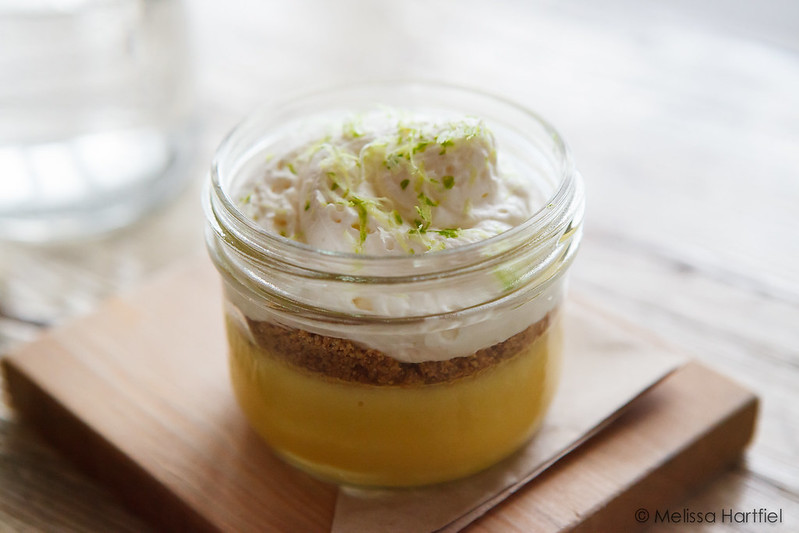 I had a little piece of one of Sean’s churros and to be honest, this was the dessert I really wanted – but it came with ice cream and that’s one dairy product I stay far away from – even with my lactaid pills.  The churro was crispy and soft with it’s crunchy cinnamon sugar coating.  The banana sriracha ice cream… it was interesting.  Sean couldn’t quite get a handle on it.  I tried a teenie tiny pea sized amount and it was definitely unique… the milk cuts the heat of the spicy sriracha (although Sean discovered on his second bite that that wasn’t always the case!) and it actually works surprisingly well! 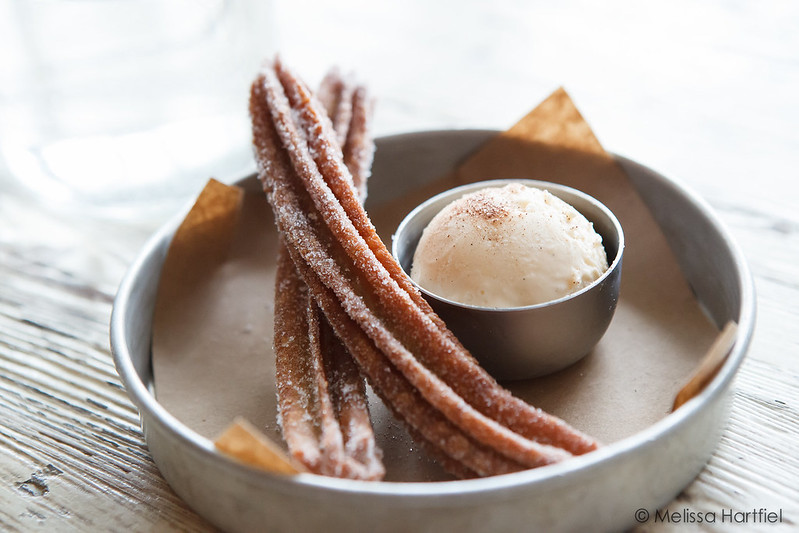 It was hands down a fabulous lunch.  The food was quick, inexpensive and ridiculously fresh and light but still so satisfying and flavourful.   The service was fast, friendly and helpful.  I can’t wait for the trucks to be back out for the summer so I can feast on more of it when I’m downtown.  But in the meantime, I’ll definitely be hitting up the Hasting street location for more of that tortilla soup and those tacos… oh… and that masa toast!

If you live in the Metro Vancouver region, do yourself a favour and hit up Tacofino’s commisary. It’s located at 2327 E Hastings Street just west of Nanaimo on the north side of the street.  They do brunch, lunch and dinner and have a full cocktail and spirits menu as well. If you don’t live in Vancouver but it’s in your plans to visit, add this place to your list of food stops.  You won’t regret it!

If you live in the Vancouver area, I’m giving away a $125 Gift Card to Cardero’s Restaurant.  Check out my post on the S. Pellegrino Almost Famous Chef competition to find out how to win!