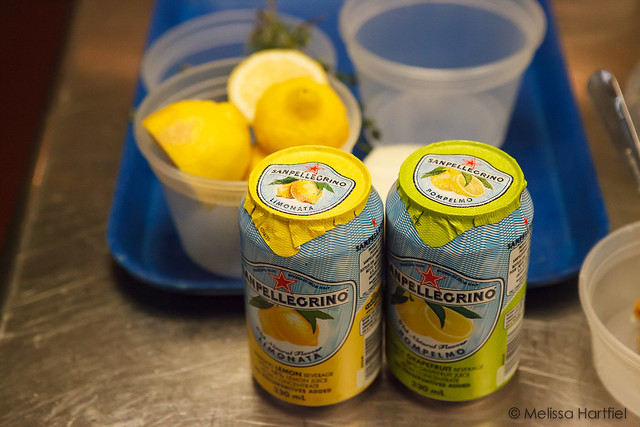 There is something really amazing about watching people follow their passions – especially when they’re first starting out.  You can watch the passion seeping out of them – there’s an intensity to them – sometimes it’s quiet, other times it’s boisterous.  Their eyes flicker when you ask them about what they’re doing – sometimes their entire face changes.  It’s like a light switch that flicks on.  And when they’re just at the beginning of their journey and you can see the good things that stretch out before them along the road, it’s hard not to be excited for them (watch out though – being around people like that has a way of reigniting your own passions for what you love… you’ve been warned!) 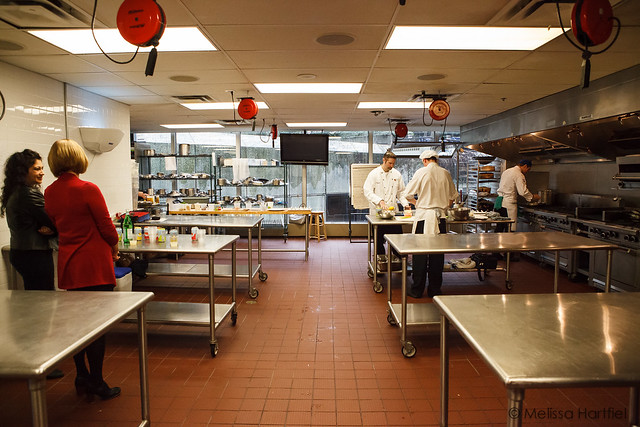 Yesterday, I headed out to the International Culinary School at the Art Institute of Vancouver to watch two of Vancouver’s freshest young chefs rehearse for the San Pellegrino Almost Famous Chef Competition Canadian finals in Toronto at the end of the month.

Matt Cusano from the Art Institute and Kevan Hafichuk of the Pacific Institute of Culinary Arts are two of 3 young BC chefs heading to the Canadian finals, taking place in Toronto on February 25th at Cirillo’s Culinary Academy, where they’ll join the other 4 finalists.  That’s right – there’s 7 competitors from across Canada and three are from BC.  That speaks to the local talent here!  The winner of the Canadian event will head on down to Napa Valley in California to compete in the overall final of the event from March 8th -11th. 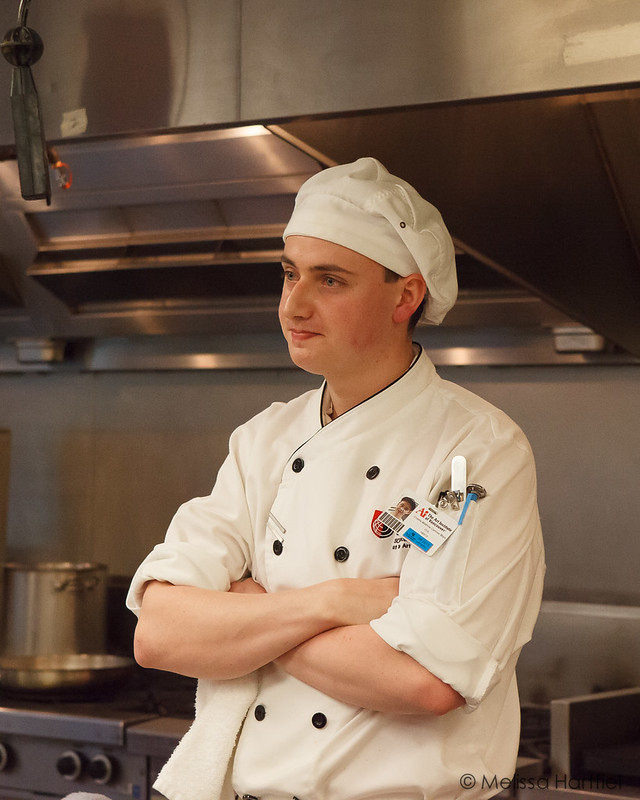 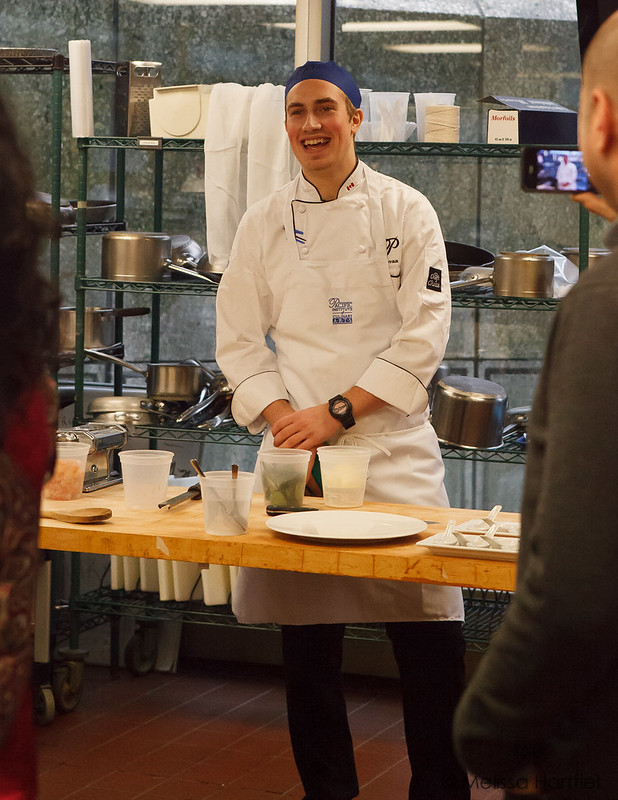 At the Canadian finals, the students (yes, they’re all still culinary arts students) have two hours to prepare 8 servings of the dish they have created for the competition.  They don’t have a sous chef or any help – it’s just them.  Timing is critical! 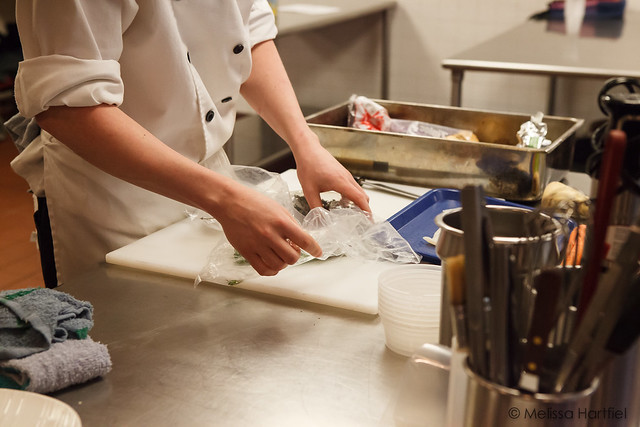 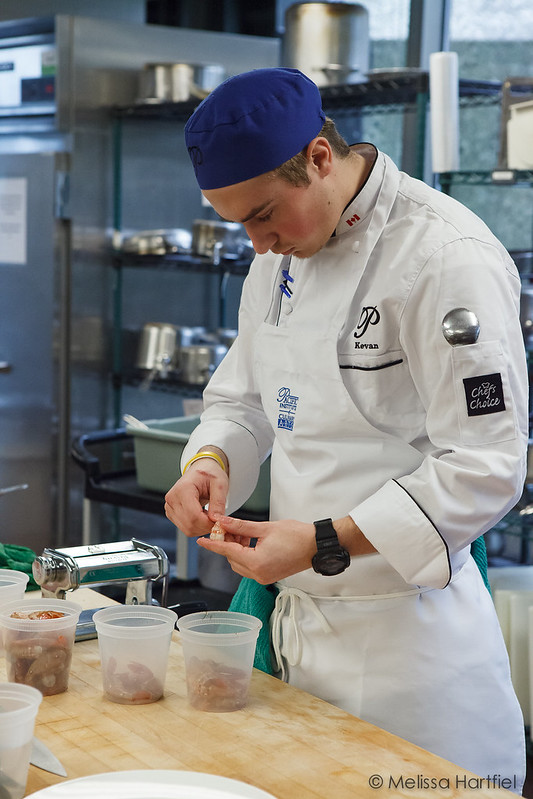 The rehearsal we attended was an hour and the chefs, with some extra hands in their form of their respective advisers, prepared tasting portions of their dishes for us to try, all while chit chatting with us and enduring 8 cameras in their faces and 8 media bodies scurrying around their kitchen.  Not exactly Iron Chef intensity but still pretty busy!  They handled it remarkably well and we didn’t see a single ruffled feather or any visible signs of stress!  They were both charming and very excited about what they were doing but worked with a methodical single mindedness  that will do them well in the Toronto finals 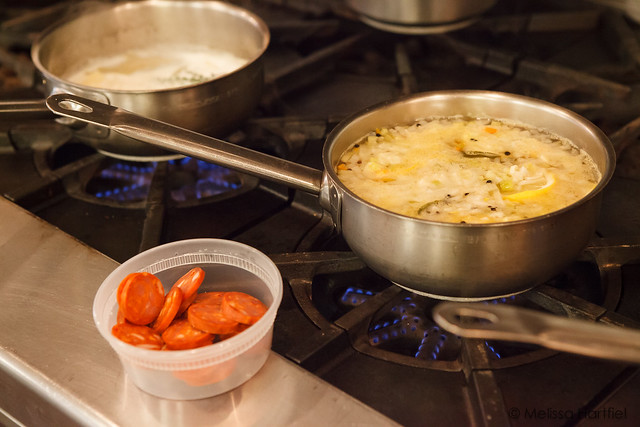 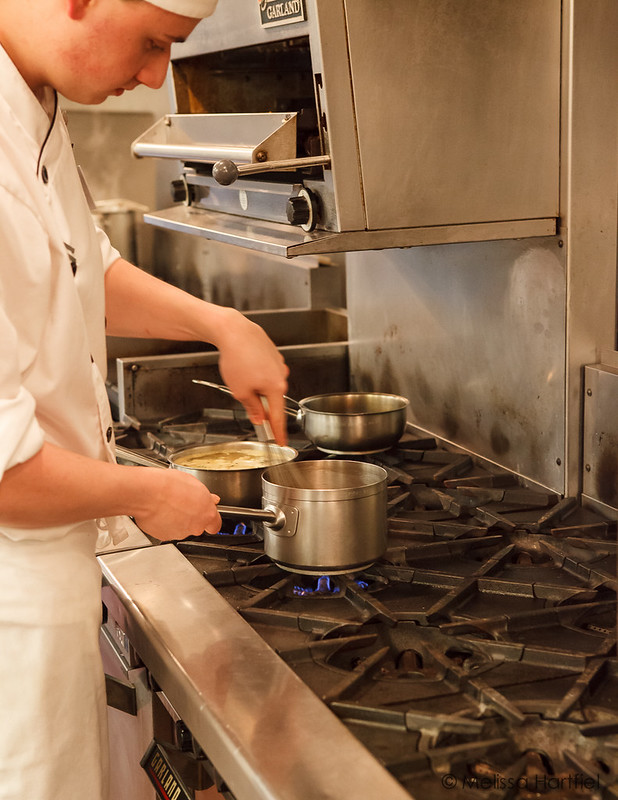 Kevan plated his dish first – it was an oxtail tortellini with sustainable BC spot prawns cooked in kaffir lime butter sauce with roasted cauliflower and cauliflower puree garnished with baby watercress.  Everything was, of course, created by from scratch and beautifully plated and then it was our turn to devour it.  It was fabulous – an amazing combo of flavours with a little pop of brightness from the lime butter sauce to balance it all. 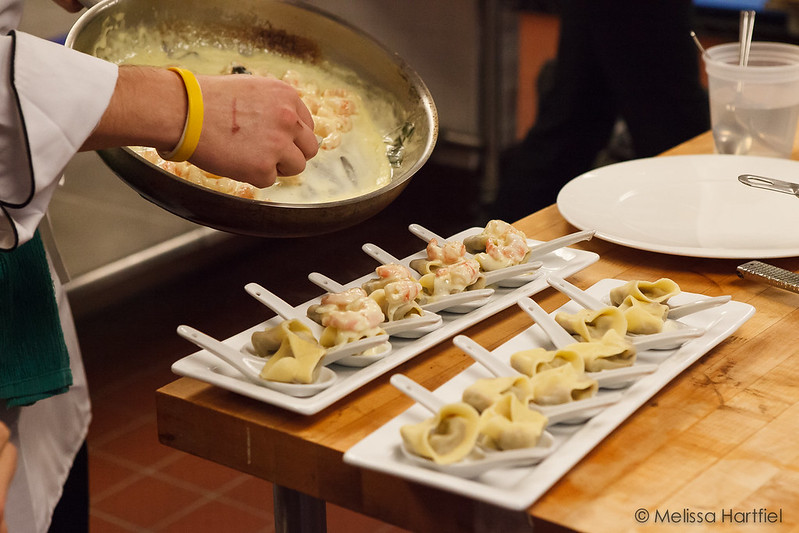 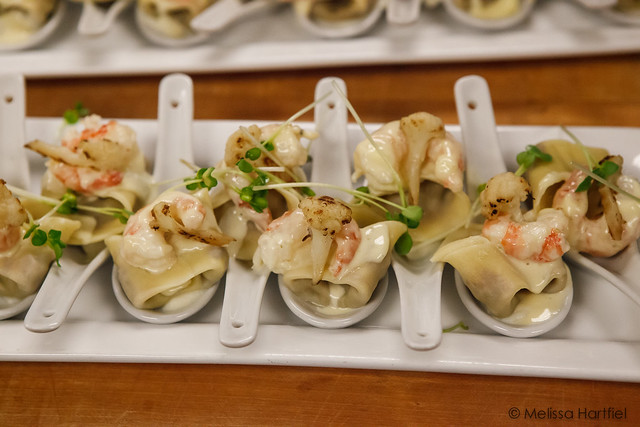 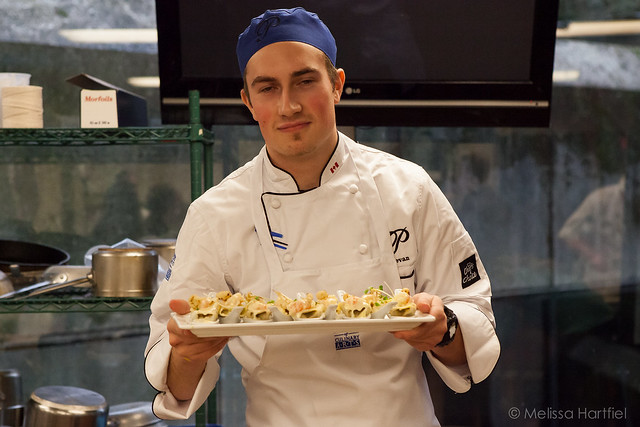 Next up was Matt with a miso-glazed poached halibut with chorizo and parsnip puree garnished with celery leaves and a little chorizo oil and lemon zest.  Another winner – the parsnip puree gave the dish some nice texture to balance the fish and the chorizo gave it a little added zing! 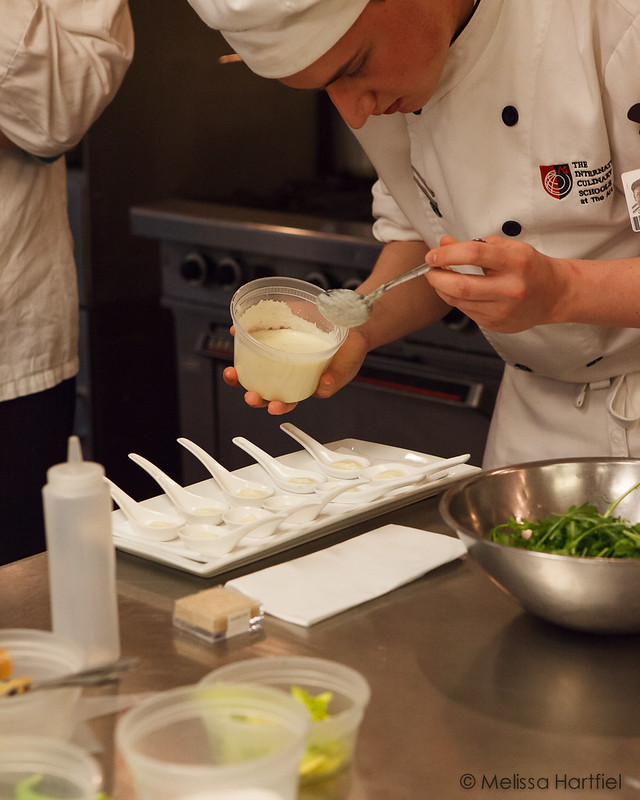 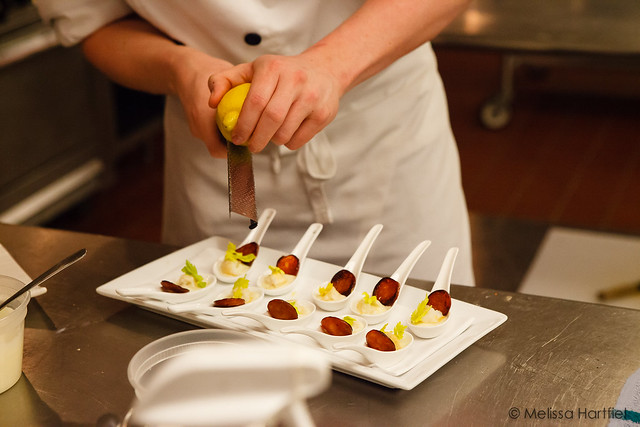 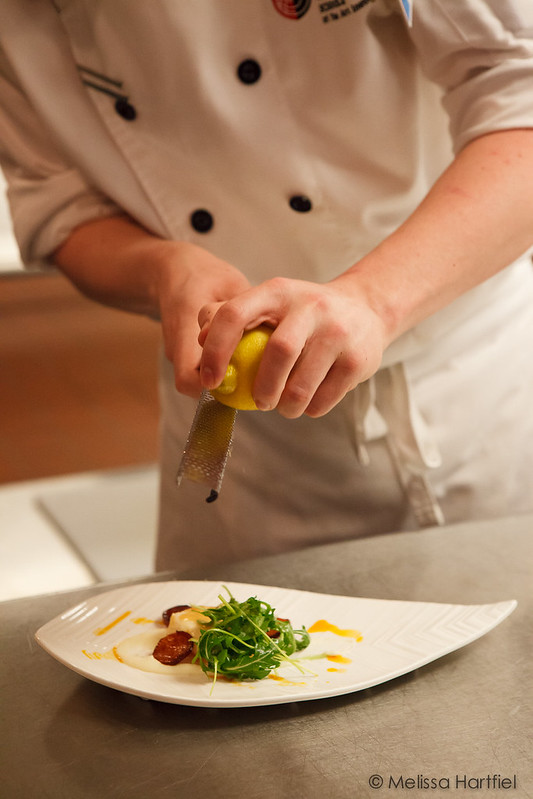 Both these young chefs have worked very hard to get to this point – one told us he’d been working on his dish for 3 months!  I’m just glad I don’t have to be a judge and choose.  But if this is the future of Vancouver’s culinary scene, it’s in excellent hands.  Here’s wishing them all the best as they head off to Toronto at the end of the month to compete! 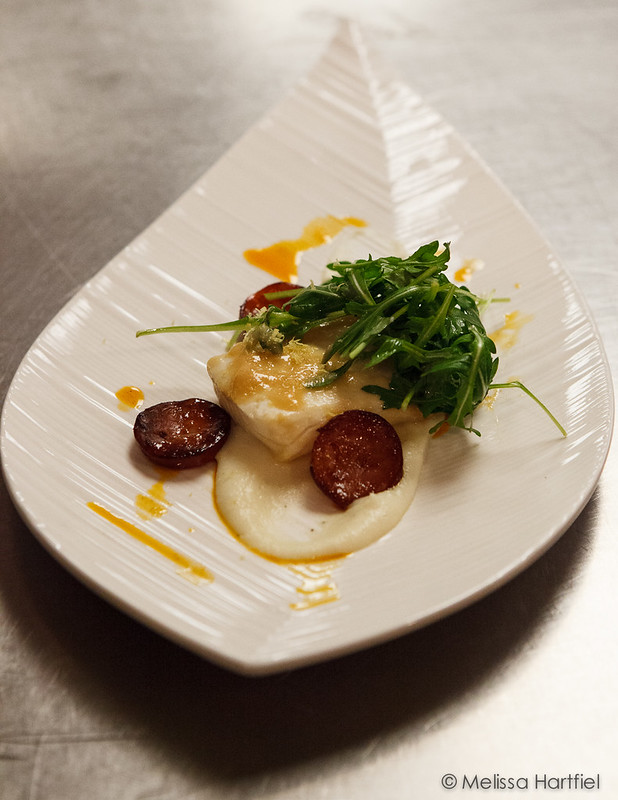 Want to see more?  San Pellegrino has put together a great ebook of Amost Famous Chef recipes from some past participants as well as some great cooking tips from this year’s competitors.  The recipes have been adapted with the home kitchen in mind so don’t be afraid to check it out!

And in celebration of the competition, San Pellegrino has generously given me a $125 gift card for two to enjoy dinner at Vancouver’s Cardero’s in Coal Harbour to give to one lucky reader.  Cardero’s is right on the water and has some of Vancouver’s most amazing waterfront views as well as some delicious seafood dishes.

So how do you get your hands on this great dining experience?  It’s easy.  First things first – you MUST be able to dine in Vancouver in the next few months (sorry out of province readers!).  Then, check out the recipe e-book and leave a comment on this post with the dish you would most like to try.

Make sure you come back here and leave an additional individual comment for each of the above to let me know you did them and to get your extra entries.

I will do a draw through random.org on Sunday February 24th at 11:59 PST and announce the winner on February 25th (the day of the Canadian final!)

What are you waiting for!?!

***UPDATE.  The winner of the contest, as drawn through random.org was Diane with comment #15.  Congrats Diane!