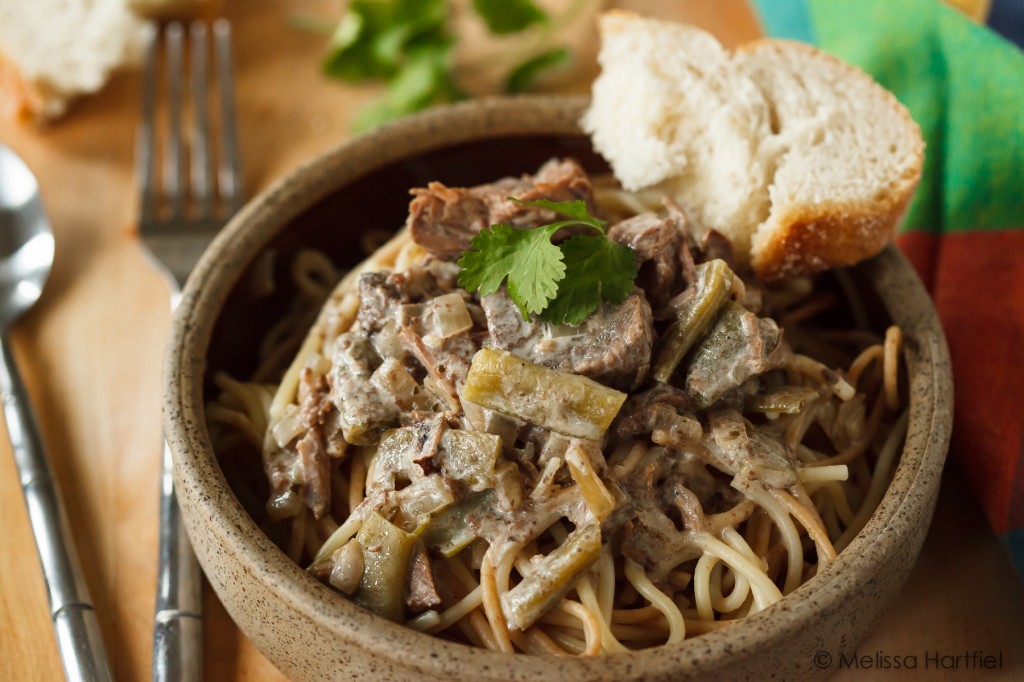 Disclosure notice: I was provided with a slow cooker from Crock-Pot for the purpose of writing this post.  All opinions stated within are my own.

Every semester I guest lecture to Media Arts students at one of my alma maters,  BCIT.  They’re closing in on graduation and getting ready to start their careers and I come in and tell them all about what it’s like to be a freelancer in the real world – not the one they learn about in their small business class.

Basically, I come in and destroy all their illusions of sitting around in their pajamas all day while sipping expensive Starbucks lattes and having lunch with their friends… somebody’s gotta do it, right?

Inevitably, after I have spouted off all my wisdom (it’s a short talk!) and I see the awe in their faces over how I have done this thing they all hope to do, somebody raises their hand and bursts the bubble of illusion I’ve just created…

“so, how do you arrange your day?”  or “what does a typical day look like for you?”  or something along those lines…

And I sheepishly grin, and probably blush, and stammer and then admit to the fact that I am completely useless before noon.

I just am.  I try.  I’m in my office every morning by nine – but only because my office is 20 steps from my bedroom and another 20 steps from the kitchen, where I have access to large amounts of caffeine.  I muddle about answering emails and surfing the web and doing social media bits and pieces.  I try to schedule phone calls and meetings between 10 and noon or do errands just so that something productive actually happens in those hours.  But it feels incredibly forced.

Then at noon, I throw in the towel, take the dog for a run, make myself lunch and a big cup of tea, sit down and… the gears kick in.

I can go straight from 2pm to 9pm without even looking up.  I could go longer except that at 9, Sam gets up from his bed, comes to my chair, nudges my knee with his snout and then runs back to his bed, picks it up with his teeth and drags it into the living room.  Then comes back to me and drapes his 85lb self over my lap and puts his head on my keyboard – a not so subtle memo that the work day is done.  Dogs, seriously… they force us not to be workaholics…

Dinner, is a big pain in the butt.  It hits right in the middle of the most productive time of my day and I don’t want to figure out what to cook, spend time cooking it, or cleaning up after it.  It disrupts my creative flow and my brain can’t switch gears.  I’d eat peanut butter sandwiches every day if it resembled a balanced diet.

I’ve never used a slow cooker.  When I worked a 9-5 job, I thought it would be a good thing to have – dinner waiting when you got home!  Only problem is, being the non-morning person that I am, getting myself out of bed early enough to prep the food to go in the slow cooker before I left for the day seemed awfully unrealistic (seriously, my morning routine was timed with military precision so that I could sleep in until 7:20 and still leave the house by 7:50). 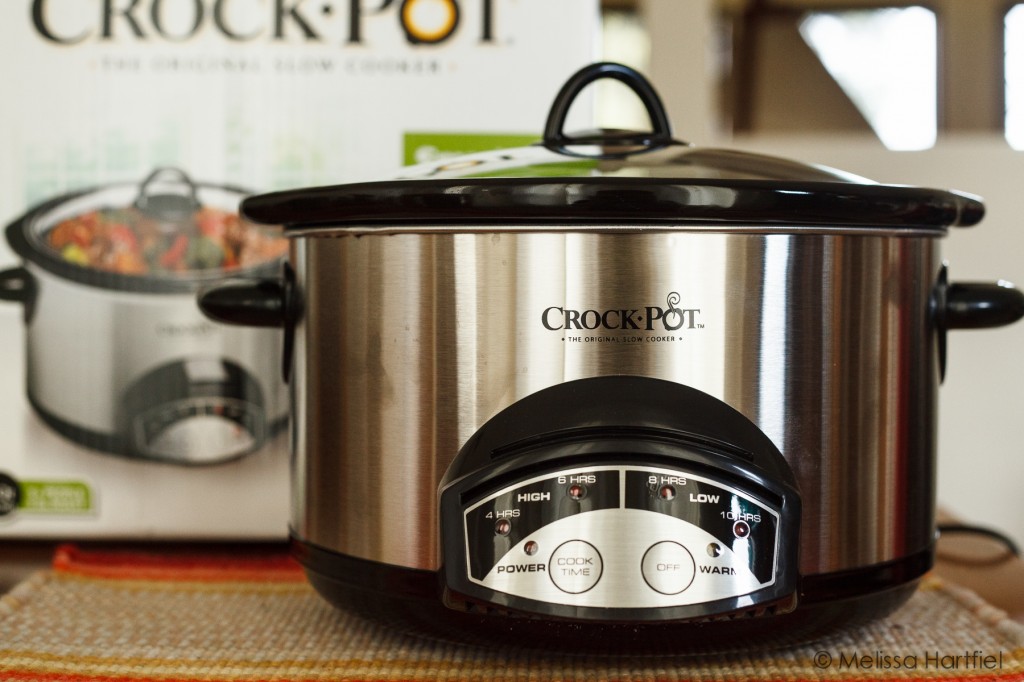 So when CrockPot asked if I’d like to try one of their 5qt slow cookers and come up with a recipe for it, I started thinking… maybe this could work.  I can prep it  and clean up in my totally unproductive morning time and have a hot dinner ready when my stomach growls at me in the middle of my productive creative zone without having to put any thought or energy into it.

So I tried it out.

The initial results were a disaster.

I made Moroccan Chicken.  I didn’t want to do the standard pulled pork and this sounded different and tasty. It smelled Ah-May-Zing.  I got the recipe from my bestie, Laura, who’s usually terribly reliable when it comes to recipes, and it sounded like a winner.  I piled all the ingredients into the cooker, set it on Low and walked away. It bubbled away making my house smell all gorgeous.

And then I went to serve it.  It was soup.  Way too much liquid for the amount of chicken.  And it was bland! I couldn’t believe it.  It had gallons of spices added and it smelled so beautiful.  But nope.  Bland as paper.  The chicken was perfectly cooked – falling off the bone tender.  Hmmmph.  Sorry Laura – I just don’t know what happened!

Lesson learned though – getting the whole liquid to solid ratio is important in a slow cooker! 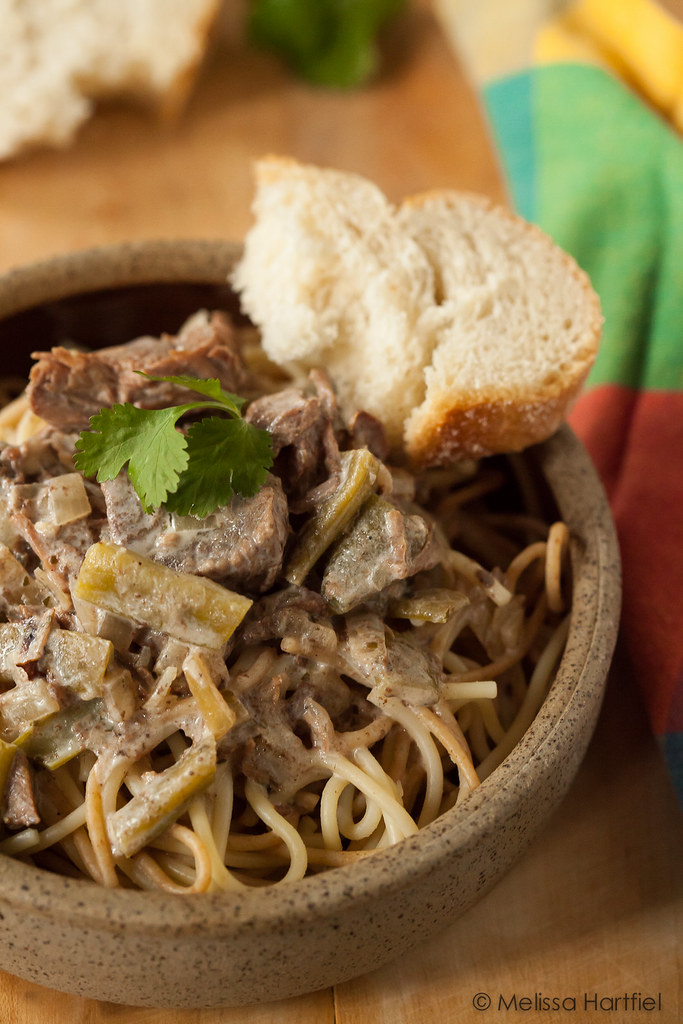 So then I went to my next recipe stop – my brother.  My brother, Matt, who I have been trying to coax into writing a guest post from time to time, because he is a bloody amazing wizard in the kitchen and loves to experiment (my not so subtle attempt to flatter him into posting – is it working Matt?).

He said I had to try his beef stroganoff – a recipe he’s been tweaking for a while. Except… it has TWO… TWO cups of mushrooms in it.  Blech.  So, I asked him a ton of questions about it and then decided how I could modify it and still have enough liquid in the pot for it to cook properly but not have any mushrooms.  I’m pretty sure I hit on success…

It was… in a word… AWESOME.  Totally struck gold.  Everyone who ate it loved it.  I served it with spaghetti but I think next time I’ll do rice.  Also, a nice chunk of crusty bread works great for sopping up juices! And… it’s even better the next day 🙂  Seriously… I licked my bowl the next day at lunch.  Licked the bowl, people!!

The CrockPot itself was great and I really like the idea behind having one – it definitely worked well for me.  Dinner was ready at a normal dinner time, there was no mess or fuss and dinner cleanup was putting a couple of plates in the dishwasher.  And.. it’s definitely a step (or 10 or 11) up from peanut butter sandwiches. Now I have a feel for how it works I’m looking forward to experimenting more! (I’m giving that Moroccan chicken another shot – if I get it perfect I’ll post it!)

**If you want to use mushrooms like Matt’s original recipe called for, you’ll need two cups of chopped mushrooms.  Use 1 cup of onions, 1/2 cup of broth and omit the wine and green beans instead. 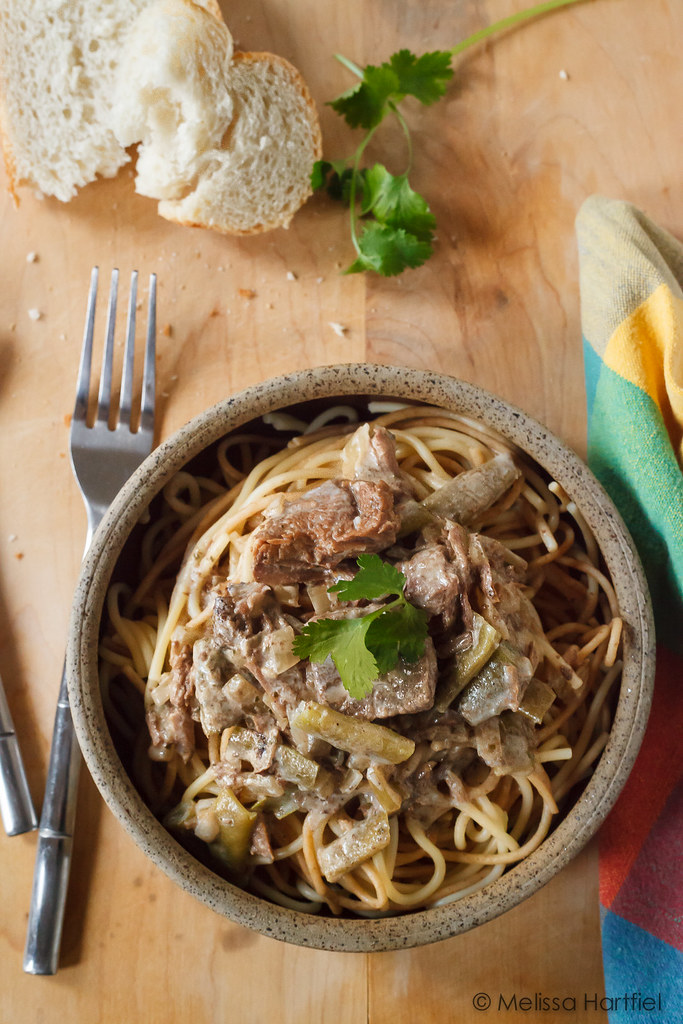