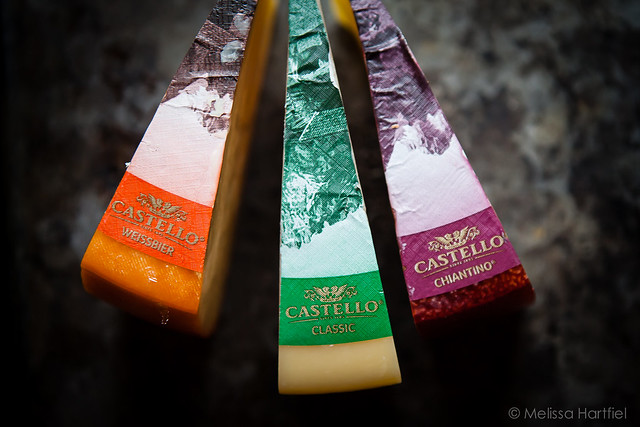 Disclosure notice: I was provided with free product by Castello cheese for the purpose of writing this post.  All opinions stated within are my own.

On the heels of reviewing Castello Cheese’s Blue Cheese a few weeks ago, I was asked to check out their new Alps Selection Cheeses and see what I thought.  Cheese.  Yes.  Of course I will.

The Alps Collection consists of a Chiantino™ Cheese, a Weissbeir Cheese, a Classic Cheese and a Hirten Cheese – all of which were totally new to me.

My first challenge?  Tracking them down!  The only chain on my list of western Canada grocery stores carrying the cheeses that was near me was Overwaitea, but when I checked my two local Save-On Foods (part of the Overwaitea family) neither had any of the cheeses in stock.  I wasn’t too sure what to do and didn’t feel like trekking it all the way out to the Fraser Valley to find a Co-Op or downtown to a Choices.  And then I googled HY Louie only to find out that they’re IGA… which I always thought was Sobeys! Go figure. 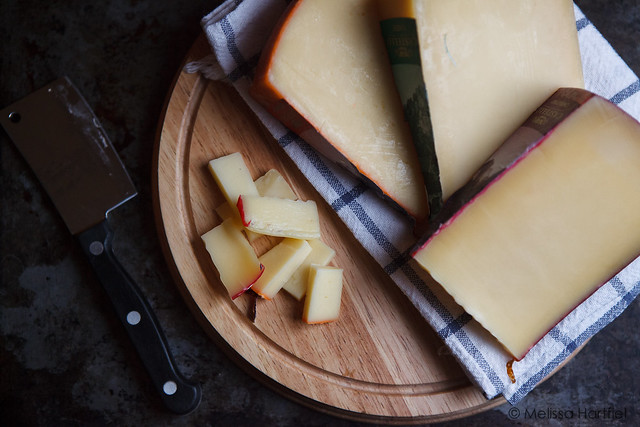 Even so, I was only able to find three of the collection in IGA – the Chiantino, Weissbeir and Classic.

My next challenge?  Not having ever tasted any of them, I had no idea how I wanted to use them in a recipe.  Quite the dilemma.

Fortunately, in serious crisis moments like this, I have some friends I can count on: Blondie and Donnie Vegas.  Yes, these two are the type you can go to in any emergency and know they will come through.  When I called Blondie early on a Saturday morning before we had scheduled a mammoth Rock Band session (please don’t judge… just… don’t…  we totally rock it out… and no, you don’t need to know how old we are…!) and asked if they would help me with a cheese taste testing that night, she grudgingly said “weelllll… I guess so – if we must“.

(If you haven’t figured it out, she was joking.  Seriously.  We could eat an entire wheel of cheese between the three of us.  We have no cheese self-restraint). 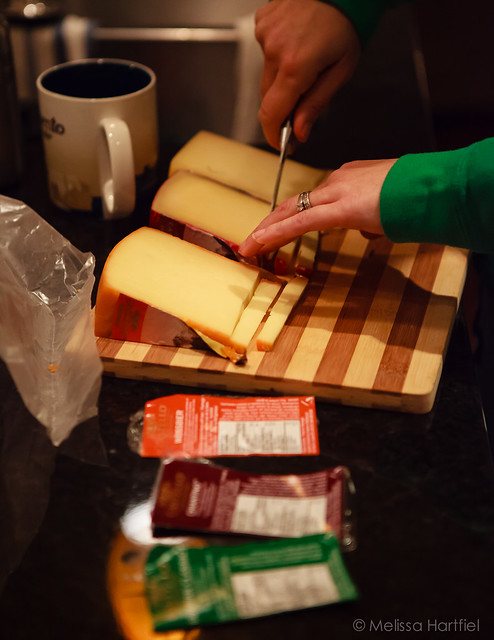 So that evening, Blondie sliced up all the cheeses for us and we dutifully sampled one piece of each.  We nibbled and made thoughtful faces and then somebody… I’m not sure who – said “we need wine to cleanse our palates”.  Whoever it was, was brilliant.  Blondie pulled out a bottle of red and poured three glasses and we soldiered on… 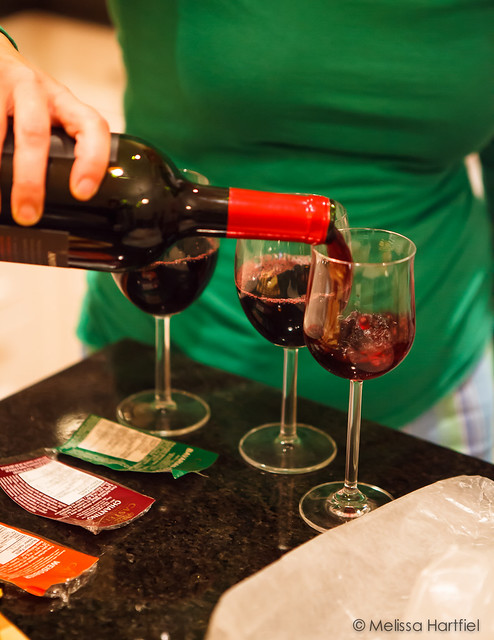 Pouring out some “palate cleansing” wine – see our three labels dutifully lined up so we could keep track! 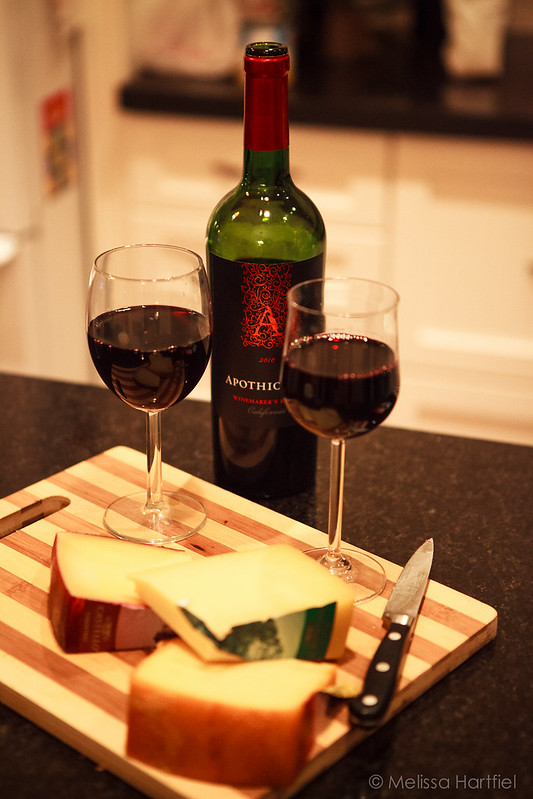 However, here you only see two glasses of wine. Somebody, who shall remain nameless, couldn’t wait for his wine while I took a photo…

Here’s how they stacked up:

This was the strongest of the three – it’s described as buttery with a faint bitterness from the beer and we all agreed that it was indeed buttery and a tiny bit bitter but this was hands down, the favourite of the cheese trio by everyone who sampled it.  I found it to be quite sharp and thought it would be great for adding a little bit of bite to a Mac n Cheese

This one puzzled all of us.  The label describes it as “Mild & slightly sweet with hints of dark chocolate, fruitiness and dryness of Chianti”.  At first, none of us could taste the chocolate or the wine.  We actually found it to be a rather nondescript cheese – especially after the sharpness of the Weissbeir.  But, as Blondie said, she’d still eat a lot of it and it might be really good in a sandwich.

Later on, as we continued nibbling, I got a piece with a bit of rind on it and then I could taste the wine.  It added a whole different dimension to the cheese and it was really tasty.  But we never did find any of the chocolate notes in it.  I actually did wind up using some of the leftovers for a grilled cheese and apple sandwich and it worked really well. 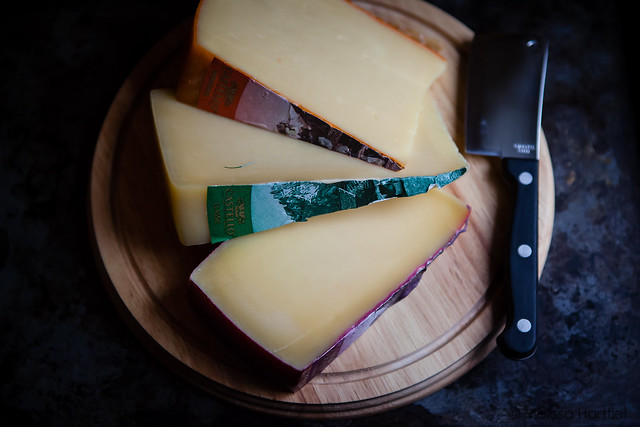 The Classic is described as “Slightly smoky aroma, like fine smoked ham, a spicy hint of mountain herbs” and we all agreed that it was exactly as described.  This was a close second to the Weissbeir in terms of a favourite.  I loved it as snacking cheese – not too strong but still with really great flavour.  I kept going back to it all evening for a little nibble and I think, that out of the three, this is the one I would see myself buying over and over as a cheese to have in the house for any occasion.

I’m embarrassed to say how much cheese the three of us ate that night but it really was a lot of fun and kept us well fueled for several hours of RockBand. 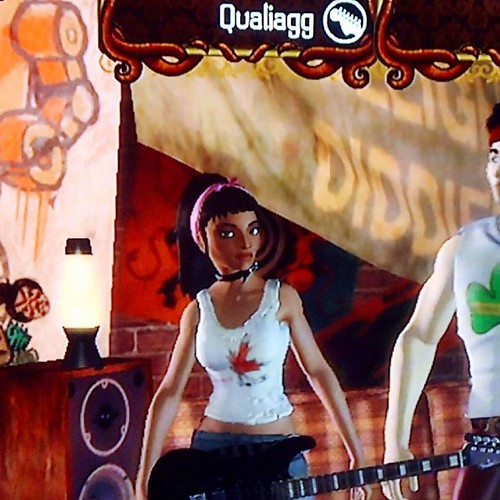 Qualiagg – she’s my Rock Band alter ego – her guitar stays in place without a strap just by the force of her pure awesomeness. I totally look like her in real life. Totally. (but not really)

So what did I wind up making with all that cheese?  Well, as I mentioned, some went into grilled cheese sandwiches but, I decided to take my classic Mac n Cheese recipe and mix it up a bit.  And I have to say, this might have been my best Mac n Cheese ever – the cheese sauce was a perfect blend of smokiness, bacon-y tang and sharpness from the cheese.  Next time, I think I’d actually make it with just the Weissbeir and cheddar and skip the Classic for a little more kick: 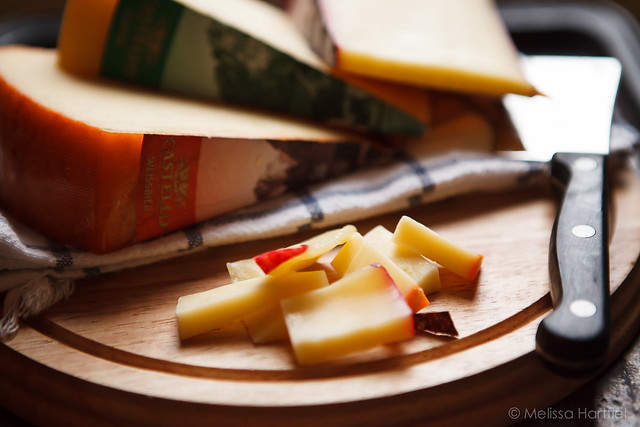 Another great mac and cheese.  I really hope that Castello’s new Alps Collection becomes a little easier to find in the grocery stores because they’re worth it.  Especially with the holiday season coming – they’d make a great cheese platter (or a Rock Band snack… depending on how sophisticated you want to get!)