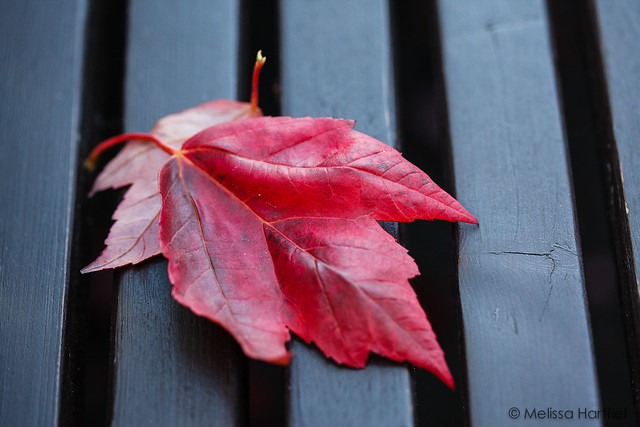 Bacon is super trendy right now.  Like in a bit of a weird obsessive way I think.  Don’t get me wrong… I loves me some bacon more than most things in this world.  I don’t like it crispy.  Oh no.  It has to be that perfect way between being just coked and not over done.  Chewy, not crunchy.  And thick sliced, slightly smoky.  It is a perfect weekend  breakfast food.

I hardly ever cook it for myself and when I do, it’s for a Bacon Buddy… that English breakfast classic.  Bacon, mayo and tomatoes on toast.  You know, so the mayo oozes into the warm toasty bread with the tomato juices… ok I have to stop or I’m going to go make myself one right now.

So I was very excited about having lunch not once, but twice at Edible Canada at Granville Island in the last two weeks.  Edible Canada has been getting really good buzz for quite a while in Vancouver for their bistro menu and their shop full of local Vancouver delicacies from the likes of Vij’s, Thomas Haas Chocolates, Burgoo, Too Die For Banana Bread and so much more.

And this summer they had a Tribute to Bacon take out window, dedicated to all things bacon that just cried out for a visit.  Plus, there’s nothing nicer than a beautiful day at Granville Island (more on that soon).

For our first visit, Sean and I decided to have a sit down lunch/brunch on the outdoor patio.  Fall leaves were already hitting the tables and chairs but it was so warm and beautiful out and with such great people watching, we couldn’t sit inside.

Sean went for brunch, and you can see his impressive looking eggs and bacon topped Ceasar over at Sean’s Adventures in Flavor town.

I chose lunch and had a heck of a time deciding between the East Coast Lobster Mac & Cheese (my life’s work is about finding the world’s best Mac n Cheese…) and the Canadian Rockies Beef Burger.  It went right down to the wire and I didn’t make my decision until the waitress came to take our order.  The Beef Burger it would be. 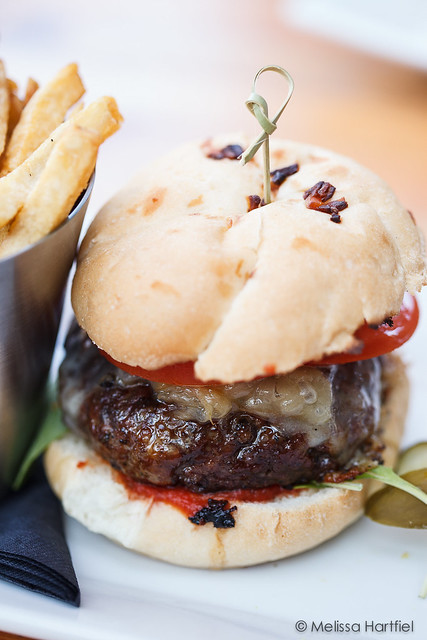 And what a burger it was… a big juicy patty, obviously homemade, topped with bacon jam, smokehouse cheddar, caramelized onions, housemade ketchup and served with pickles and duck fat frites.  That’s right, the fries were cooked in duck fat.  Talk about crispy and rich flavour! 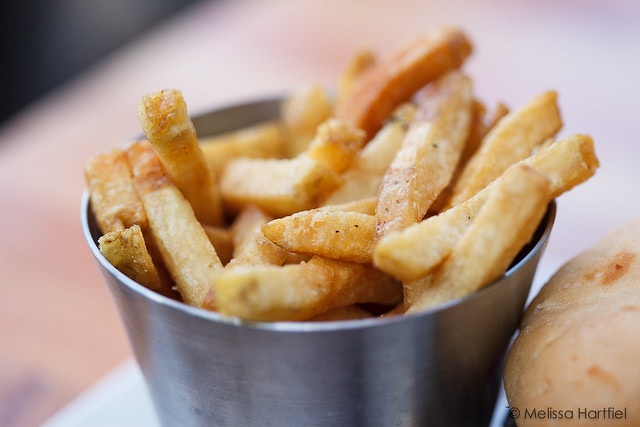 Here was my only beef with my meal (beef.. get it?? ahahahaha… ahem… carrying on…).  The bun.  The burger bun was delicious but useless.  It fell into two piece on my first bite.  I wound up having to eat my burger with a knife and fork like I was stuck in a real life episode of Seinfeld.  It kind of took away from what was otherwise a great taste experience.  The patty was perfectly seasoned and cooked. The toppings were delicious (oh those caramelized onions!).  It was just a shame I couldn’t eat it like a real burger.

After perusing the Tribute to Bacon takeout menu, we knew that we were going to have to make a second trip later to try the Bacon and Duck Rilette Poutine.  Well, Sean actually went ahead without me for the Poutine but he gladly accompanied me on his third trip so he could try the Whistler Bacon Dog.  And we decided to try some of Erin Ireland’s “To Die For” Bacon Banana Bread with whipped maple butter for dessert. 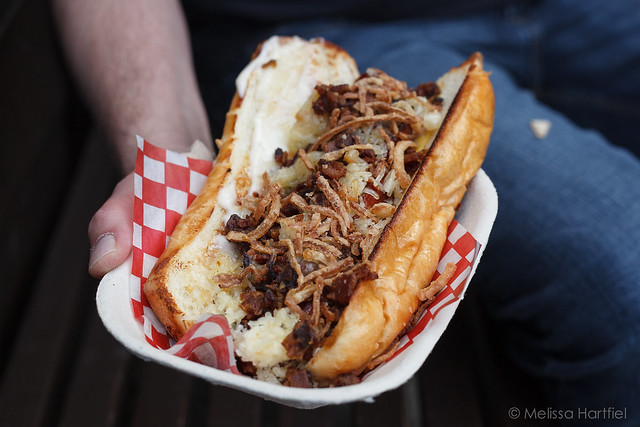 For those of you, dear readers, who are not Canadian, let me introduce you to a staple dish in this part of the world  – well ok, staple is pushing it.  This is not a dish you eat on a regular basis if you want to keep a lean physique or clean arteries.

Crispy french fries slathered in hot gravy and squeaky squeaky oh so squeaky cheese curds.  As somebody said to me the other day, your cheese curds should speak to you.  It might sound simple but I personally think great poutine is an art form and I’ve never had a really great one on the West Coast.  Just some good ones.  The really great poutine come out of Quebec and some parts of Ontario.  I think it’s the cheese curds.

Lately, more and more creative takes have started to pop up with all kinds of interesting toppings but always, always there is the fries, gravy and cheese curds. 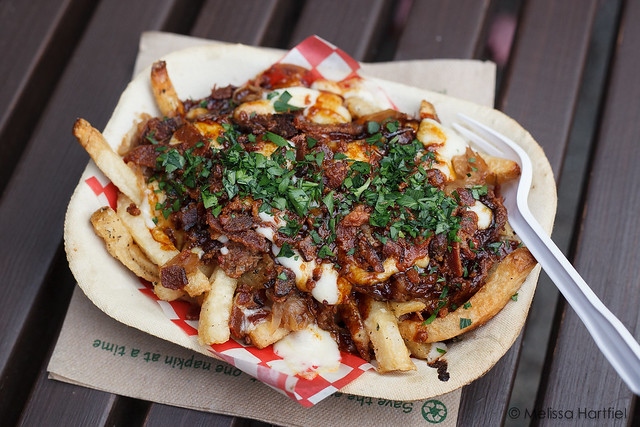 So how was Edible’s?  Pretty good.  The gravy was outstanding.  It was rich but also had this sweetness to it that I think came from the caramelized onions.  I made sure I soaked up every single drop of it! The fries (also cooked in duck fat) were crispy and stayed crispy.  The duck was delicious.  The bacon was a bit too crunchy for me but it was still tasty.  My only reason for docking points was… the cheese.  They say on the menu it’s curds but it seemed like it was just melted mozzarella.  It was definitely not squeaky, chunky cheese curds.  And to me, that is the definition of poutine.  So I was a little disappointed about that.  Still very tasty but not what I’d hoped for.  Overall, a solid 7.5 out of 10.  Real curds would’ve bumped it up to a 9 easily. 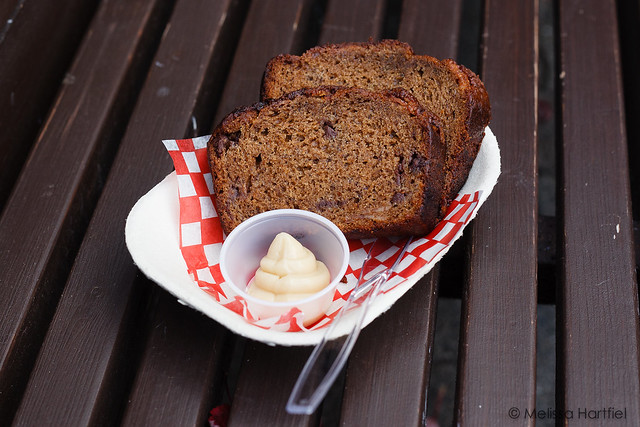 On to the “To Die For” Bacon Banana Bread.  I could barely taste the bacon.  It was more of an added texture than a flavour.  After hearing all the fuss, I really expected this to be WOW.  And it was delicious but not WOW.  It was a nice, comforting slice of banana bread.  Very moist and lots of banana flavour with a little bit of chocolate in the mix.

Overall it was a great lunch and you still have two days to check out the Tribute to Bacon take out window at Edible Canada on Granville Island before it closes up for the season.  The bistro remains open all year and is worth trying out, as is their adjacent retail shop with all its local goodies!