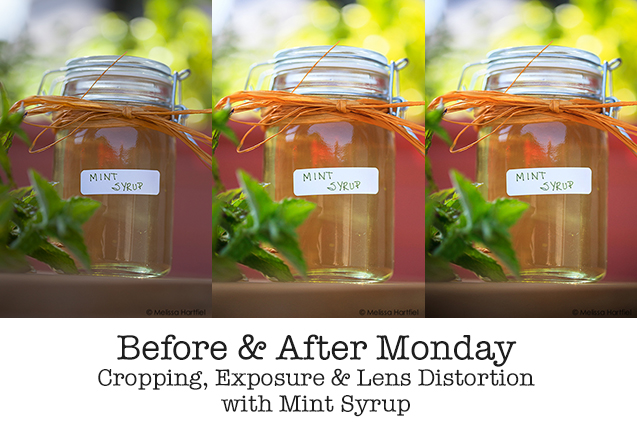 Last week’s photo was an easy start.  It was pretty decent looking to begin with.  So this week I thought I’d pick a photo that needed a bit more work.  And the funny thing is, it took barely any longer to fix this one than last week’s.

I have tons of mint so I decided to brew up a batch of mint syrup.  This might be one of the easiest things ever to make and it works so well in so many things that it’s worth making a jar full and storing it in the fridge – it’s especially good in summer drinks.  Especially cocktails!

Here’s the original image with only a watermark added: 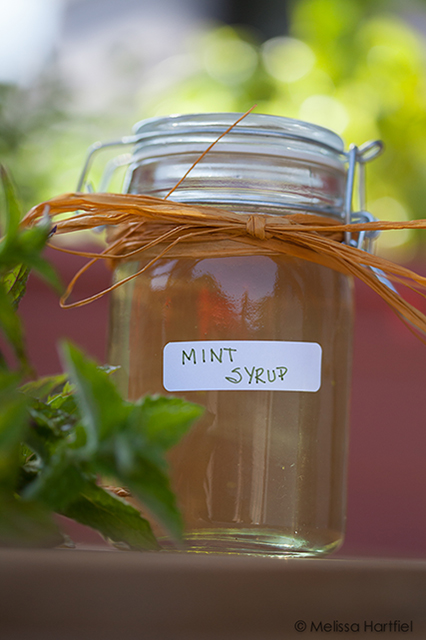 How It Was Shot

Settings: f/2.8, 1/1600, ISO 640.  The camera was on a tripod and I was shooting just below the table surface in an attempt to draw more focus to the jar and make it appear bigger.  The more observant among you may wonder why I photographed this at such a high ISO when I obviously didn’t need to, given my fast shutter speed (1/1600) and the fact I was using a tripod.  Simple really… I forgot to change it.  One of my very very bad habits. I was shooting into the sun but was low enough and had enough of a background that it didn’t cause too many problems.

The focal point was the syrup label and with an f-stop of 2.8, you have to be very careful here.  2.8 will give you a very small depth of field making only a small part of the image in clear focus.  This is great if what you’re focusing on is right at the foreground of the image – the background will be nice and blurry.  But in this case, the label was mid-ground and that meant I have a blurry foreground and a blurry background.  In this case, that’s what I wanted.  But you do need to balance your f-stop choice with how sharp you want each part of the photo to be. 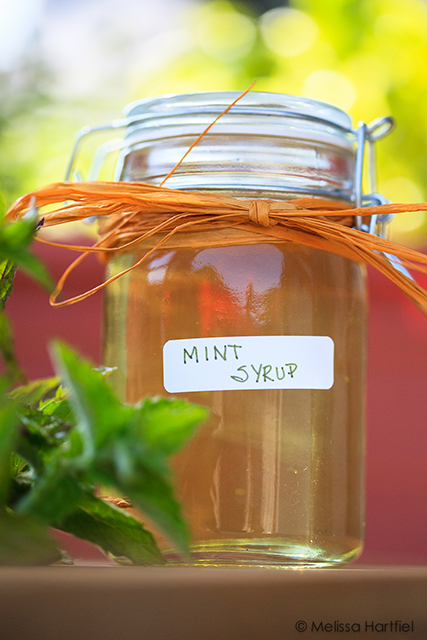 The first thing I noticed right off the bat is the image is way too dark and it’s crooked.  When you shoot something on an angle – either from the side or below, like I did here, it can be really difficult to make things appear straight.  So let’s focus a little more on the Lightroom cropping tool and exposure this week: 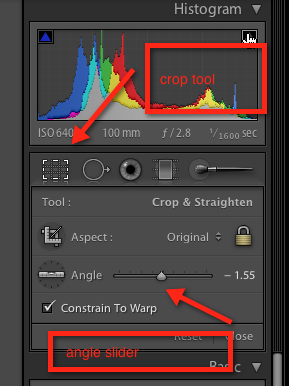 As mentioned before, the crop tool is the square box located just below  your histogram in the top right corner of Lightroom.  Clicking on it will make the cropping window appear where you have more options.  All we want to do here is adjust the angle, using the angle slider.  Just below the angle slider is a box called Constrain to Wrap.  By checking this off, it will force you to keep the crop inside the original photo.  It’s a very handy little tool to use and I recommend that you check the box.

As soon as you move the angle slider, a grid will appear on your photo: 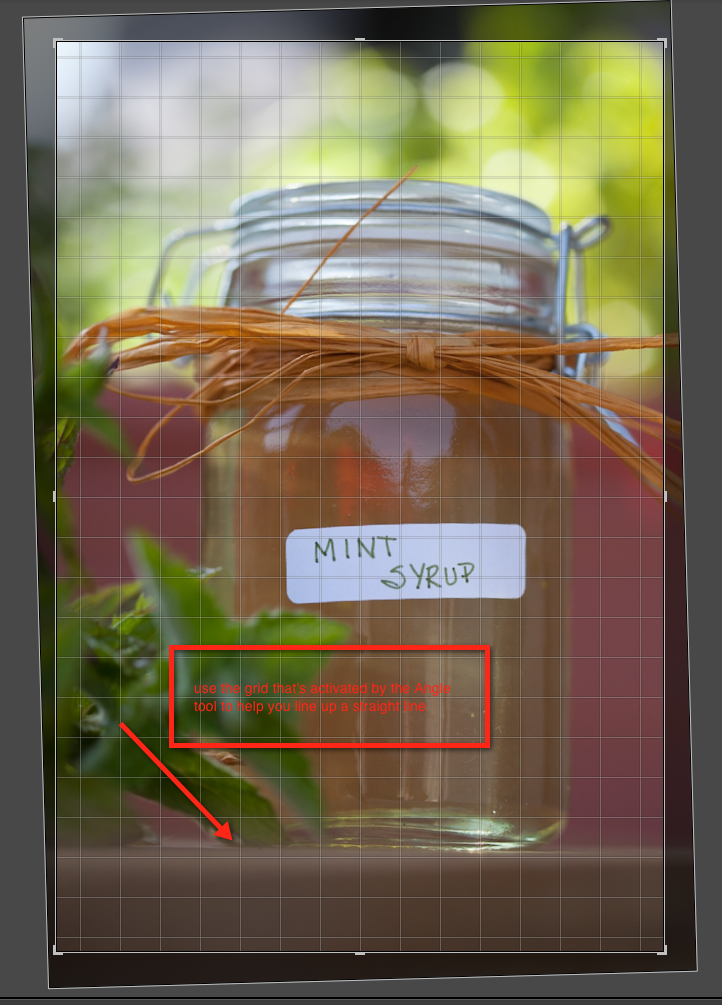 Use the grid to your advantage by visually lining it up with a straight line in your image.  This might not work in every case but most of the time it will do the trick.  You can see here that my surface is straight but the jar lid is still a bit crooked.  But not crooked enough to annoy the viewer’s eye so I’m ok with it.  This is where you may have to get creative with your cropping!

Fixing the Exposure and Tones

Now it’s time to work on fixing up how dark and dull the image is. 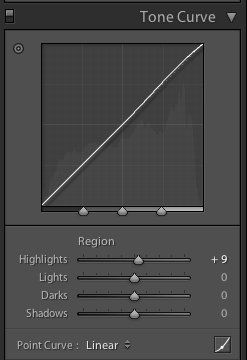 For the basic settings, I bumped up the exposure and the contrast and clarity.  Increasing contrast and clarity can often make the image appear darker so that’s where you may want to push up your highlights and whites sliders to compensate (in older versions of lightroom, the brightness slider will help with this).  Vibrance and saturation usually only need a very small push, if at all.

The tone curve sliders also got a few tweaks as well, but nothing major.  That, along with a little sharpening and changing the camera profile to Camera Landscape brought me to the final image.  Not too much work eh?

Now, some of you, myself included, might find the top of the image too bright now.  There are a lot of ways this can be fixed – that’s the beauty of post processing – there is often more than one way to accomplish something.  And as you might be starting to see, post processing is a very subjective exercise!

So while we could leave the photo looking like the final image I posted further up, we could also take it a step further and darken the area.  We could do this by selective burning with the adjustment brush but let’s look at Lens Correction 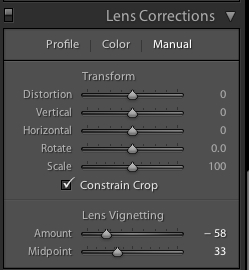 Depending on the camera and the lens you use, you may find you have some lens distortion or vignetting, or lack of vignetting.  Lightroom and Photoshop give you handy ways to fix this and Lens Vignetting often becomes a way to give an ordinary photo a bit of artistic flair.  I find that it doesn’t often work very well with food photos.  Lens vignetting is where you will see often see the outer edges of the photo darkened.  They can also be lightened and the vignetting can range from harsh to very subtle.  Generally, it works best if you apply vignetting after you crop.

All I did here was use the vignetting sliders to add a very subtle darkening (slide to the left) to the edges of the photo.  It just darkened the bright areas at the top enough so that is didn’t feel like it was glaring at me. 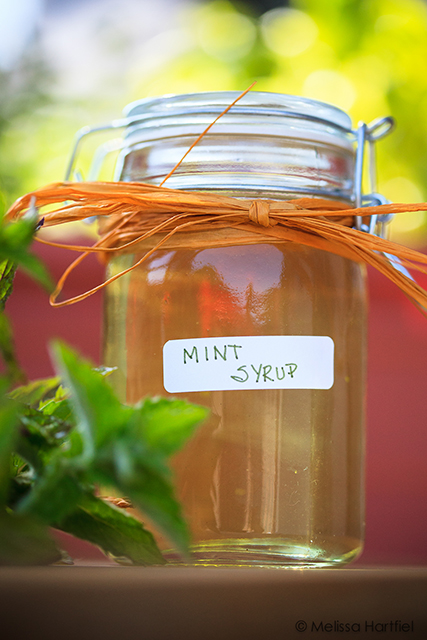 And… we’re done!  This was actually one of my least favorite photos from the shoot. I didn’t actually have a very successful go of it with this one.  Some days it goes like that. I could have done much better in camera. But I thought it had some potential to show how much a few little tweaks of some Lightroom sliders can affect a photo and make a huge difference.

But this was my actual favourite photo: 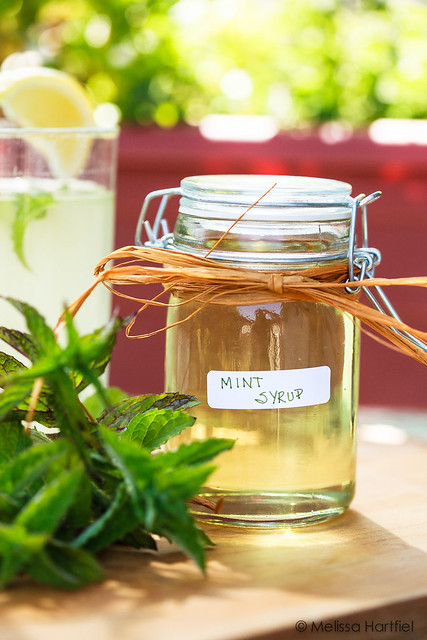 Yes, I’ll even leave you with a very quick recipe!

To make mint syrup, boil together equal parts water, sugar and mint leaves until the sugar dissolves. Then let the mixture simmer for about 10 minutes or until it thickens.  Let cool completely and then run the mixture through a seive, pressing out any excess moisture left in the mint leave.  Store in the fridge in a well sealed container for up to two weeks.  After you first batch, you may want to tweak your sugar and mint amounts.  My next batch will use less sugar and a bit more mint!  Enjoy.