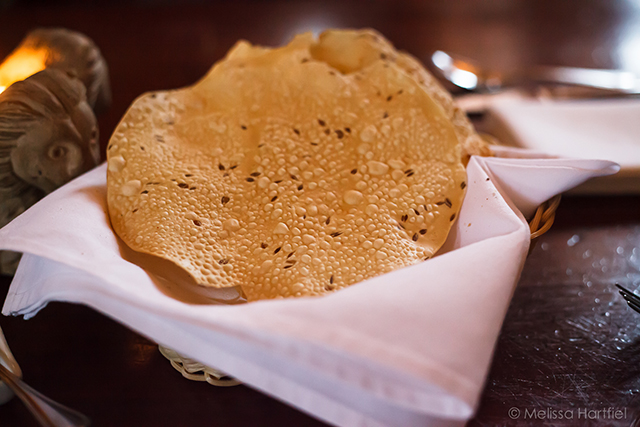 The latest package to come from VANEATS.ca is the Maurya’s Spice dining pass from Maurya’s Indian Cuisine on West Broadway and it is, in a word, fabulous.

Everyone has their own set of comfort foods that make them feel like everything is right with the world.  For me, Indian cuisine falls smack dab in the middle of that category.  There is something about the colours, the sauces and the spices that makes me feel like everything is good.  It’s definitely a cuisine for all of the senses.  And, living only a few blocks from Delta/Surrey’s Scott Road, I am only steps away from some of the best Indian food in Metro Vancouver.  So, how would Maurya’s stack up?  Let’s get to it!

My usual VANEATS partner, Sean from Sean’s Adventures in Flavortown, had already had the opportunity to try the package when he helped Kev and Bill film their latest promo video.

So, I called up one of my trustiest best girls, the divine Ms N, who loves Indian food as much as I do, and we set out on a miserable rainy evening – the perfect kind of evening for a big Indian meal.

Here’s what we were looking forward to:

We were greeted and seated quickly and the restaurant itself is beautiful.  Immediately we were given a basket of my favourite Indian starter, papadums.  Crispy, light as air and baked with spices, they’re a perfect way to get your appetite going.  Ours were served with mango chutney and a green relish.  (I forgot to ask the server what it was but we thought it tasted like cilantro and lemon.)  Both were delicious but I preferred the chutney, which worked out well as Ms N. preferred the relish.

We were asked if we wanted our dishes brought out separately or together and what spice level we wanted.  We chose medium and asked for everything to come together as one of the fun parts of Indian food is mixing things together and using naan to scoop it all up and get all the juices. 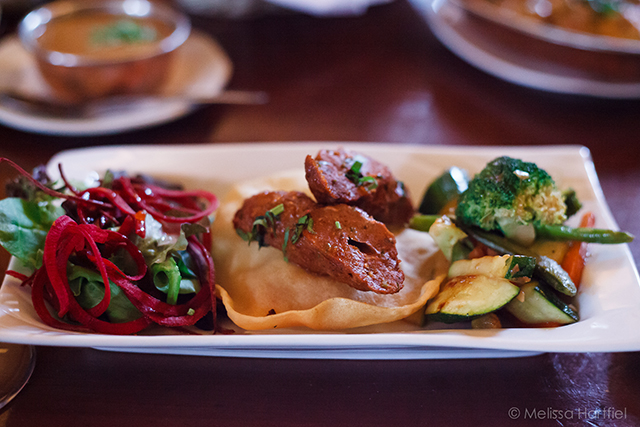 First up we had the mixed greens and beets salad which was crispy and light with just a hint of vinaigrette dressing.  A perfect light addition to the meal.  It came served with the mixed vegetables, including two of my favourites, broccoli and zucchini.  The veggies were perfectly seasoned – I could have eaten a entire dish of this and probably been pretty happy.

The most unique item on the plate, and one that was new to both of us, was the Seekh Kebab.  This was minced lamb that had been formed and cooked on a skewer in a charcoal oven, making it look almost like lamb sausage.  It was delicious.  Spicy but not overwhelming, with great texture and it didn’t have that overly strong taste that lamb can sometimes have.  We couldn’t figure out what it was plated on – it was almost like the prawn crisps one gets in Asian restaurants – but it was also really good! 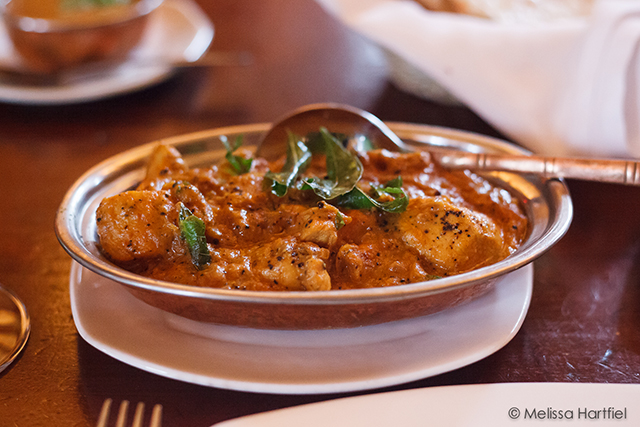 Our next dish was the chicken chettinad – also new to me.  This is a 2009 Dine Out Vancouver award winner and it’s easy to see why.  This now rivals my love for butter chicken.  It was full of flavour with the coconut adding a little sweetness to the tang of the sauce.  Definitely comfort food in a bowl.  We both loved it and it paired perfectly with the garlic naan. 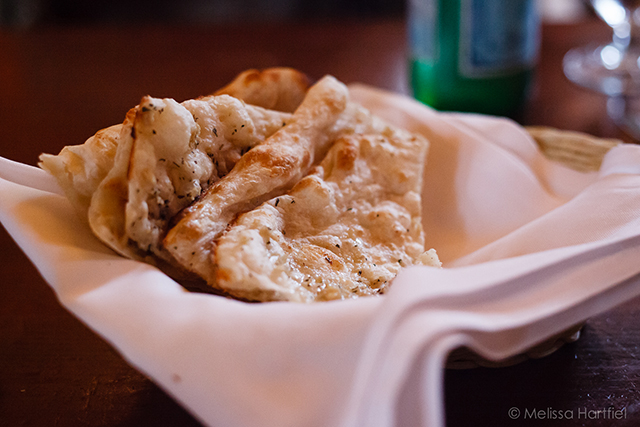 Naan is a must in any Indian meal.  It’s good all on it’s own but it is perfect for getting the drippings from all the sauces that Indian food is known for.  Adding garlic to it just adds to the flavour and makes it that much better! 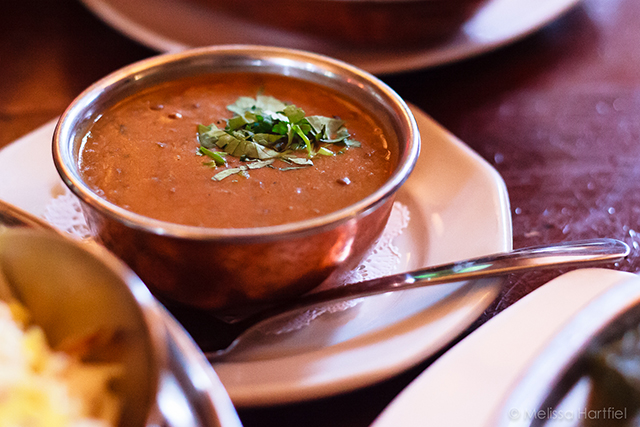 The Daal Maurya was a lovely accompaniment to the whole meal.  The flavour of the lentils is very gentle and it doesn’t have the spiciness of the other dishes so I found it to be a nice break for my tastebuds when the heat was starting to take over.  It was great as leftovers the next day as well! 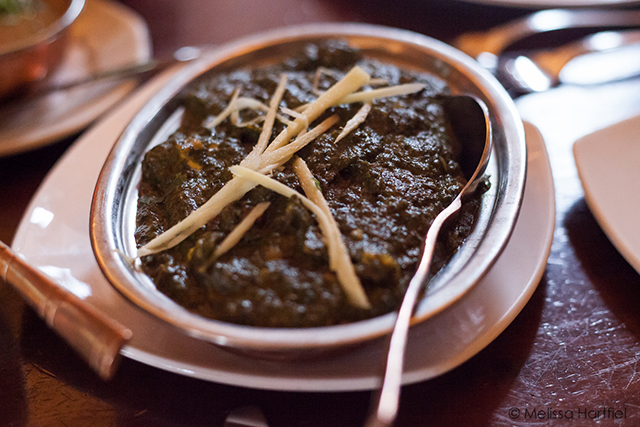 palak panir – not included in the package 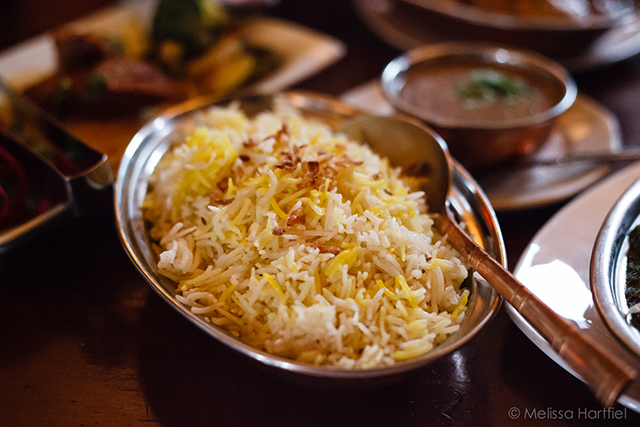 basmati rice pulao – not included in the package

That’s right – leftovers.  We had looked over the package before we arrived and honestly thought that given how much we love Indian food, we were going to need to order an extra dish or two.  So we chose Palak Panir – farmer’s cheese cooked in garlic and a cumin spinach curry sauce, and Basmati Rice Pulao to help us sop up all those delicious bits that can get left behind otherwise.

This is one of those times where the reason why this blog is called Eyes Bigger Than My Stomach is very apparent.  We had no need to order the extra dishes.  (but they were worth it! You can never go wrong with leftovers!).  This package was more than enough for two – and we may be girls but we’re not the kind with bird like appetites.  We like to eat!  At $18 this was a tremendous value and the food was beautiful and delicious.

We also ordered drinks, which are not included in the package – I had wine and Ms N had San Pellegrino (one of us had to drive and it wasn’t me!) and we ended our meal with hot chai.  The service was impeccable and very attentive and we were offered refills on our popadums and tea.  The whole experience was relaxed and full of great food.  Definitely a rival for my usual Scott Road haunts!

This is one VANEATS.ca package you cannot afford to pass up.  You won’t be disappointed.  The passes go on sale July 4th at 7am and they often sell out quickly.  I suspect this one is going to be one that gets snapped up fast!