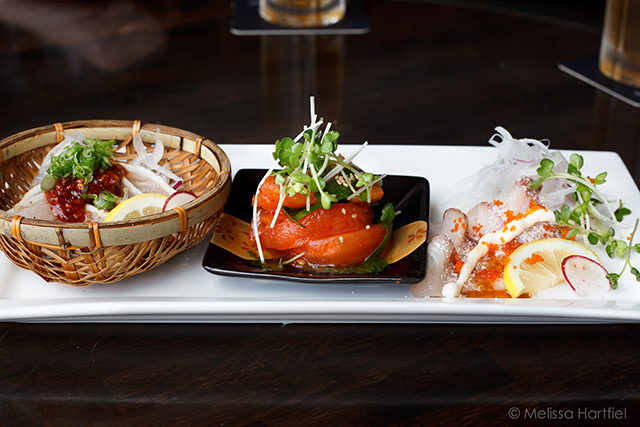 I’m always happy when VANEATS.ca sends me an email asking me to take part in reviewing their latest dining package because I know my tastebuds are going to have a good night.

The latest package to come my way was the Suika Punch meal from Suika Izakaya – a six course meal for $25 that will be on sale from June 20th – August 31st from VANEATS.ca. 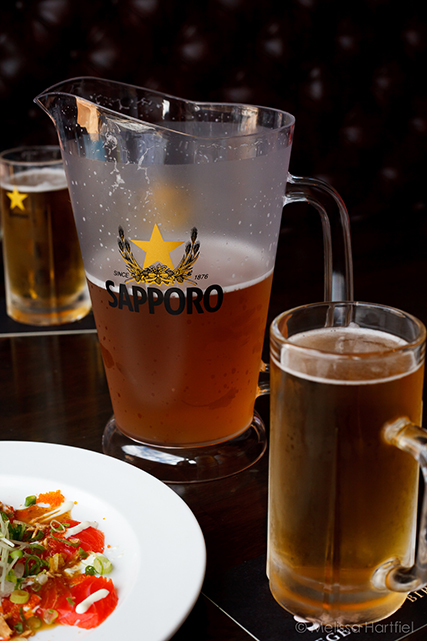 a pitcher of sapporo comfortably kept the three of us watered

Here’s what you’ll be getting:

I started to get a little nervous when twitter sprung to life the night before my dinner with warnings of the heat that would come off the Hellz Chicken!  So I took two  of my favourite trusty fellas, including my regular VANEATS partner, Sean from Sean’s Adventures in Flavortown, with me to help sample and to rescue me if I fainted from the heat. (I kid :)) 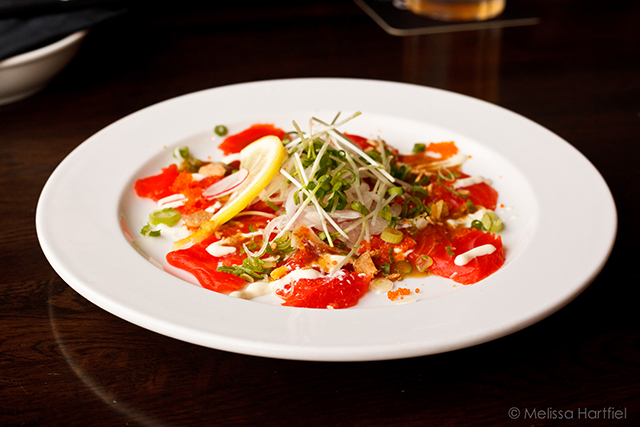 We were greeted and seated quickly and served our pitcher of Sapporo and a dish of Salmon Carpaccio immediately.  We were initially confused as that wasn’t on the package menu but it turned out to be a complimentary appetizer that several of the early guests were getting. Bonus!  The salmon was so good – I could have swallowed that all up on my own easily. 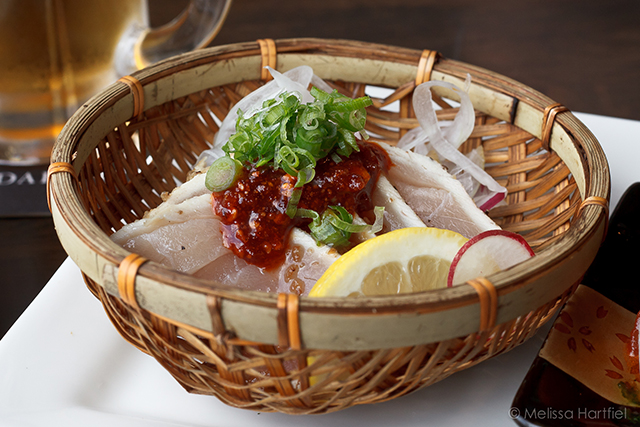 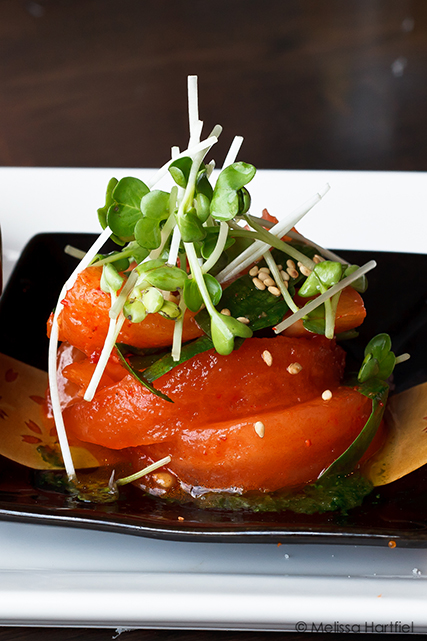 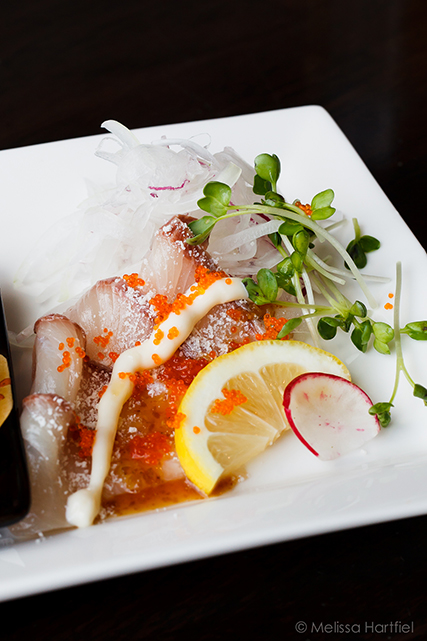 Next up was my trio of appetizers – the tuna tataki, tomato kimchi and the yellowtail carpaccio.  I’d never had kimchi before and it was my favourite – I loved the combination of flavours.  So good! The tuna tataki was my next favourite, the chili oil added a little extra flavour.  I find yellowtail to be a bit bland as far as sashimi goes so I rarely order it in restaurants,  but I loved the tobiko Suika puts on top.  Not everyone loves tobiko but I do – I love the little bursts in my mouth as you pop them. 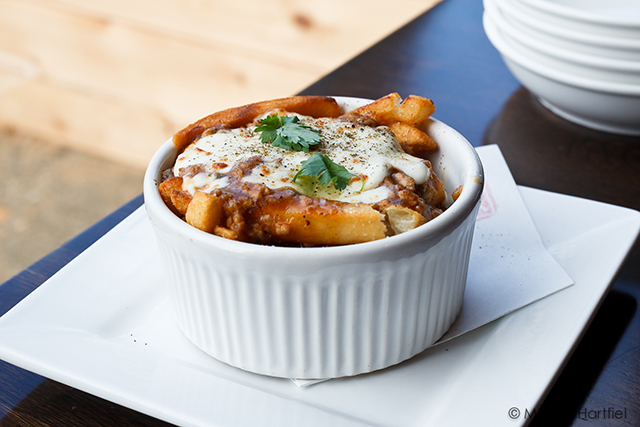 Then came my Chinese Poutine, which I was very curious about, being a big fan of poutine (gravy, cheese and chips… tell me, what is not to like??).  My initial take on it was a bit disappointing.  The cheese is melted mozzarella and not cheese curds, which completely changes the dish and how you eat it.  The ground pork sauce was much thinner than the traditional gravy you get.  But, as I made my way down the dish (a healthy portion by the way), I got more into it.  The flavours were delicious – the pork was sweet with a little spice, the cilantro (I’m a cilantro freak!) was a great add and the chips stayed nice and crisp and firm, which for me is a key part of poutine! It was a very tasty take on traditional poutine. 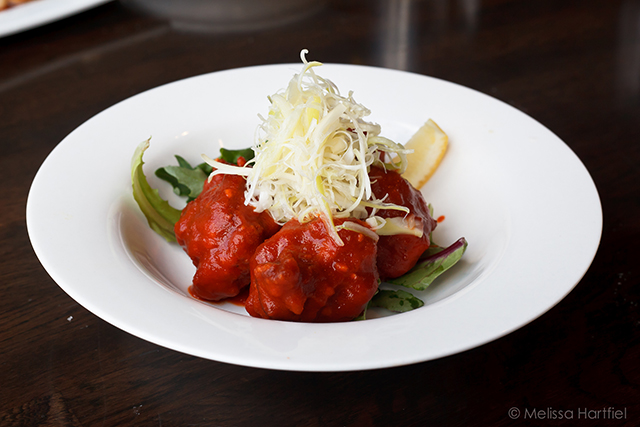 My last dish was the Hellz Chicken.  As soon as our waitress put it down (with a little giggle) we could smell the heat coming off of it.  But the three of us gamely took a piece each and gave it a try.  It was spicy, without a doubt!  If you like some heat then you will love this dish.  There is flavour to it  – not like some spicy dishes where there is so much heat you can’t taste anything.  But, for me it was a bit much.  And I’m glad it was served last so I got to fully appreciate my other dishes first! 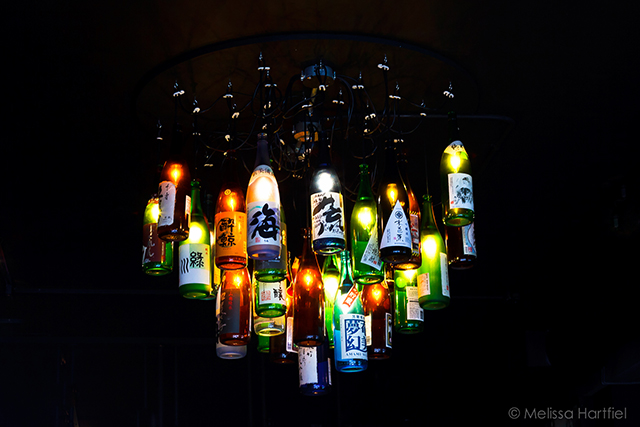 we all loved this chandelier made from old saki bottles!

This package comfortably fed me.  I did let the boys try a bit of each dish but I also sampled their dishes as well and I ordered dessert (tasty earl grey tea creme brule).  I am also a bit of a piggy when it comes to Japanese cuisine – I can eat a lot of it.  I think you could feed two if you ordered a few other things as well.  And it was nice having the pitcher of beer to share between the three of us (but be careful with this package if you’re just out for lunch or dinner on your own – that’s a lot of beer!).

For a more lively preview of the package, check out Bill and Kev from VanEat.ca as they showcase Suika Punch.

Suika Punch from VANEAT.ca and Suika Izakaya goes on sale between June 20th and August 31st on the VANEATS.ca website for $25/package.  Be sure to snap one up early as all the VANEATS passes sell quickly and give your tastebuds a little excitement!