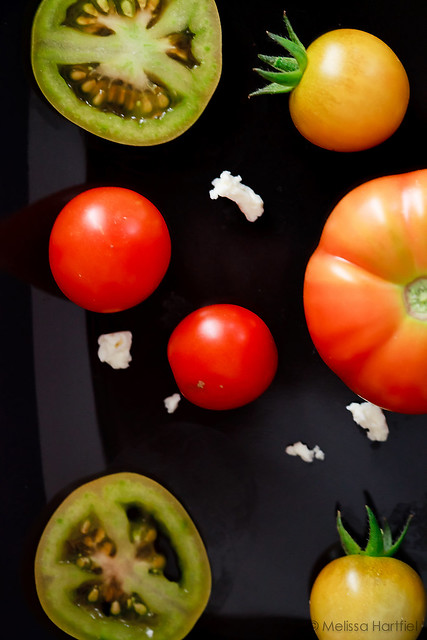 green tomatoes - only get them this time of year

There is absolutely nothing like tomatoes straight from your garden.  Nothing.  Not even tomatoes from the farmer’s market.

When you grow them, you get to choose when you pick them.  You can eat them when they’re still warm from the sun and you can smell that distinctly tomato vine smell that comes with them – it gets all over your hands and clothes.

One of the things I loved as a kid was green tomatoes.  And unless you grow your own, they’re next to impossible to get a hold of.  And by green, I mean not yet ripe.  Not the green heirloom varieties that are ripe. 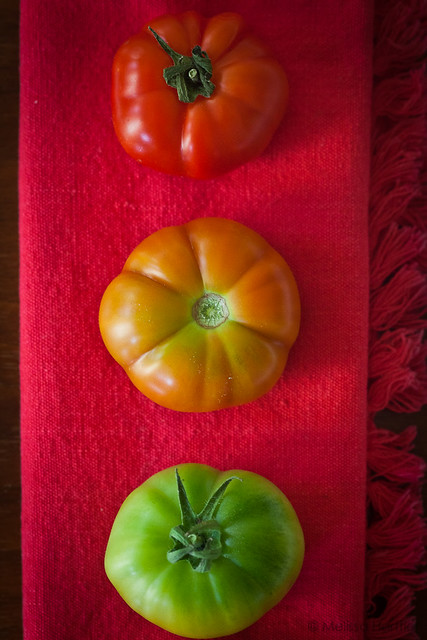 My parents used to slice up green tomatoes for weekend breakfasts when we were young and then either fry them or broil them to go with our eggs.  The flavour is distinctly different from a ripe tomato – still definitely tomato but tarter and with a different texture.  I kind of compare it to the differences between eating a slightly green banana to one that is just starting to turn brown.

Now, I can be an odd little soul from time to time when it comes to food.  While I’ll eat almost anything I definitely have preferences.  Like eggs.  If you serve me fried eggs, a soft boiled egg, or a poached egg, I will eat it.  But given the choice, like when I cook my own, I only eat scrambled eggs or omelettes. (but you will never seen an omelette on this blog because I have never made one that didn’t look like a dog’s breakfast…).

I’ll order Eggs Benny in a restaurant but only because it’s slathered in Hollandaise  Sauce, which frankly, if it meant I wouldn’t gain 500lbs, I would slather on everything.  It might even convince me to voluntarily eat a mushroom… but that’s still doubtful.

I think it’s the yolks.  I love eggs whites but I have never been able to eat the yolk part without feeling mildly off kilter for the rest of the day.  When they’re mixed together like in a scramble or omelette, they’re fine.

Or it could just be that I’m a bit loopy.   A lot of people would argue that’s probably the more likely answer…

Anyway, enough about my weird dietary oddities and eggs.  I do love a good scramble because the eggs are like a blank canvas.  You can do so much with them.  I don’t think I’ve ever made the same scrambled eggs recipe twice!

This one is great because it combines cherry tomatoes and green tomatoes, all from the garden, along with some deli ham, feta cheese and fresh oregano also from the garden (you can easily sub regular tomatoes for the cherry ones). The curry powder gives it a little extra dimension. It’s a great way to introduce yourself to the tanginess of green tomatoes.  And it’s delicious! 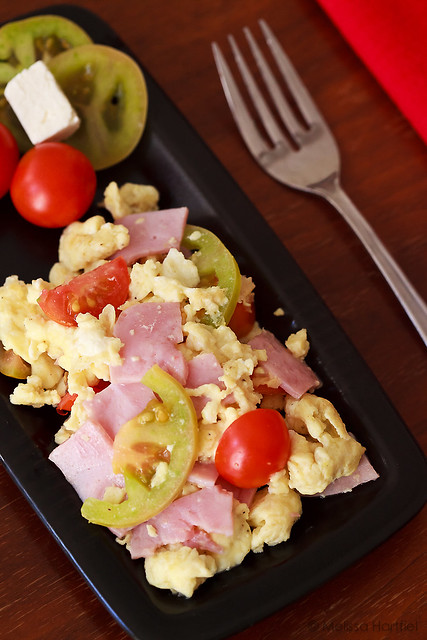 The photos… I took so many and they almost all sucked.  I had such high hopes for them and the stoplight once was such a fun idea but really didn’t get executed well.

This image was very difficult and I took about 30 variations of it – most of which looked great on my camera’s LCD but looked like crap when I got them on the computer.  The black plate I chose reflected everything.  I wound up having to use a diffusor and a reflector to cut down on some of the shadows and reflection.  I also had a hard time getting all the various tomatoes in focus and I think I should have gone up to f7.  This almost made me think maybe I should start shooting tethered.  Almost.

For post, I upped the blacks slider in Lightroom which helped cut some of the reflection.  Otherwise, it was just a tweak of the contrast and clarity sliders and a pass through Lightroom’s sharpening and a second pass through Photoshop’s sharpening.

Pretty straight forward image.  I shouldn’t have shot it on a red cloth.  Don’t know what I was thinking.  I can’t remember if I used a reflector or a diffuser to be honest.  Otherwise, in post I cropped it, added some contrast and a bit of lens vignetting and sharpened it in Lightroom

Again, a straight forward shot with light coming in from the window to the left.  Post processing was interesting as I customized the white balance, something I very rarely do.  I shot with a daylight white balance as auto was just too cold looking.  After seeing it on the computer, daylight was too orange so I customized it by dropping the temperature slider just a bit and then bumping up the tint slider till it was actually really spot on to what my eye saw.  Otherwise, the usual contrast, clarity, sharpen routine and a second sharpen in Photoshop.  (oh, also cloned out a few spots on the dish!)