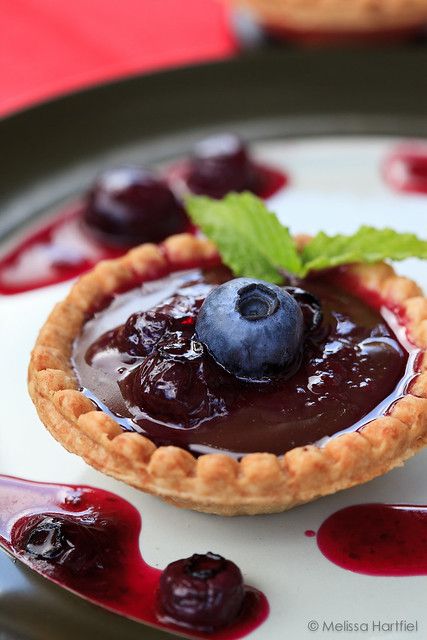 I have been up to my eyeballs in blueberries this week!  Sam and I took a drive to Surrey Farms at 152nd and Colebrook Road on Wednesday and bought three massive flats straight from the fields!  That, my friends, is a lot of blueberries.

I have 4 bushes in my backyard but, unlike my raspberries, these only produce enough fruit to enjoy during the season.  And as of right now, only one bush has ripened.

But I’m a blueberry monster.  I eat them all year.  They’re like candy to me. I love them in my cereal every morning.

Do you have any idea how much frozen blueberries cost from the supermarket in the winter??? Seven bucks for a small bag.  Do you know how much my three flats cost?  $20 total.

It took a while to rinse and freeze them all but I’m happy to say, I think I have enough to last me all winter…

In the meantime,  I left a big colander full in the fridge for snacking on until mine are ripe enough!  And I decided to make blueberry sauce.

This was a quick fix recipe.  Basically, I needed a chocolate fix.  So, I made chocolate pudding (from a box, I’m not too proud when I need chocolate) and tossed in two squares of one of my Choxie Dark Chocolate Mint Bars while it was cooking.  I spooned the pudding into premade tart shells that I’d already baked (we’ve discussed this… I don’t do pastry), garnished with some blueberry sauce and mint and there you go… chocolate tarts and blueberry sauce ready to eat in 20 minutes.

I wanted to show you two different photos I took of the tarts.  Both were “properly” exposed.  Meaning, there was no exposure compensation.

Both were taken in AV mode (aperture priority mode).  This means that I set the aperture (f-stop – which helps determine the depth of field or, fuzziness of the background), the ISO and the exposure level.  The camera figures out the shutter speed for me.  I use AV mode when I’m in a hurry or don’t have my tripod handy. 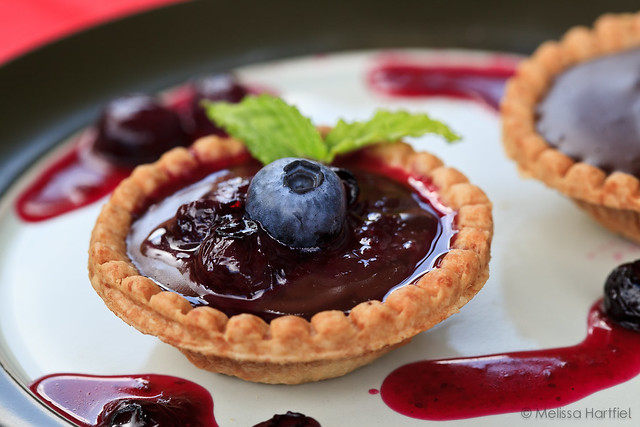 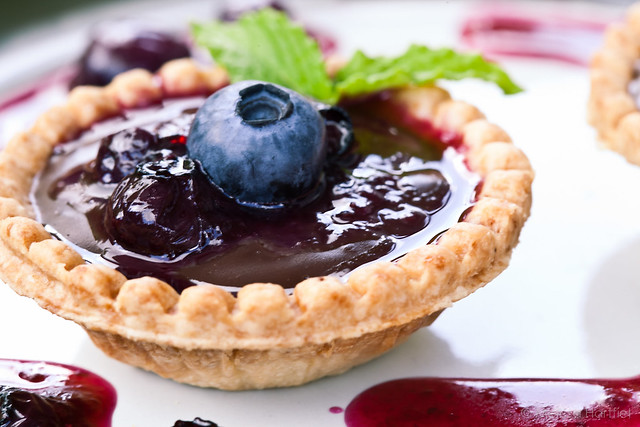 I’ve put the camera settings under each photo and as you can plainly see, despite being set at no exposure compensation, the second photo is definitely over exposed.  Actually, looking at those settings, I’m amazed the second photo is even remotely in focus – it should be wildly blurry at 1/15 and hand held.

So why does one look properly exposed and the other doesn’t?

When you shoot in AV mode, you don’t have complete control over the camera.  When you’re photographing a scene that has high contrast between light and dark, like the light grey of the plate and the dark brown of the chocolate, it’s difficult for the camera to expose properly.  In this case, it exposes based on where the focus is.

For the second photo, I focused on the blueberry sauce, which is very dark.  So the camera sees that I haven’t set any exposure compensation and exposes the photo for the dark sauce by choosing a very slow shutter speed (1/15th).  In turn, that means all the highlights are blown and overexposed.

So what happened in the first photo?  I tricked the camera.  Canons have a small button on the back called the AE lock.  On Canons, it’s identifiable by the asterisk.  I’m not sure what the equivalent is on a Nikon but I do know Nikons have the same function.

Focus the camera on a part of the scene that isn’t too light or too dark.  You’ll need to press your shutter button enough for the focus to lock (you’ll know it’s locked either by a beep or by your display telling you – you should be familiar with what your camera does at this point).  Once it’s locked, press the AE lock button and you should see an asterisk appear on your display in the viewfinder.  The exposure level has been “locked” in.  Recompose the shot where you want the actual focus to be and hit your shutter button.  And there you go!

This can be really handy when you’re shooting landscapes, or backlit scenes as well and don’t have your tripod with you.  I used it a lot when I was in Banff and had very bright but cloudy skies and dramatic dark mountains.  We were on the move and I didn’t have time to always set up properly!

Print
Cook time
10 mins
Total time
10 mins
There are millions of blueberry sauce recipes out there - it's such a simple dessert or dessert topping.
Recipe type: Dessert
Ingredients
Instructions
Notes
you can also add seasoning like vanilla, cinnamon, or nutmeg to give the sauce a little more depth - especially nice in winter!
1.2.4
18shares
Rasberry Jam and Raspberry Syrup
Birthdays and Chocolate Cake