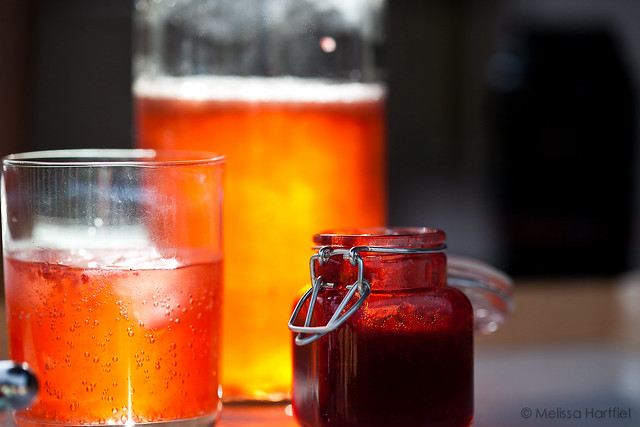 I have 5 raspberry canes in the very back of my garden.  Now, that doesn’t sound like a lot but, they produce a huge amount of fruit.  Way more than I can deal with.  So far, I’ve made two batches of jam, frozen a huge bag for winter smoothies, made two batches of muffins, given three containers of fruit away and eaten fresh raspberries on my cereal every morning for the last two weeks.

There’s still no end in sight.

So the next few posts are going to be raspberry posts! Yay! lol. 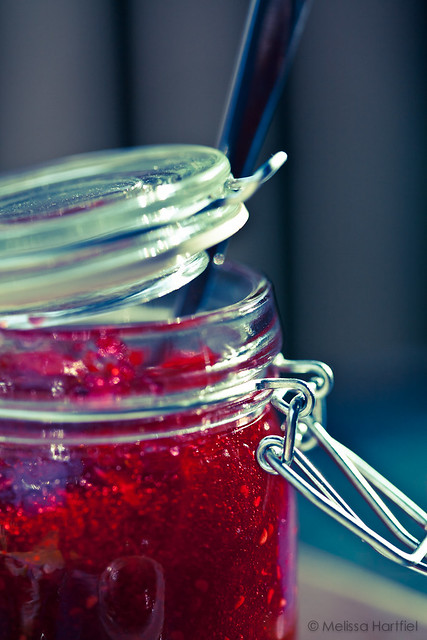 I make jam every year.  Not the fancy canning kind – just the freezer kind.  Canning scares me.  I’m always worried I’m going to wind up giving somebody a jar of botulism by accident.  It seems like something I would do.

So, jam is easy: fruit, sugar, lemon juice and pectin of some kind.  Nothing magical about it.  I actually prefer freezer jam because there’s no cooking and it tastes more like the fruit came right of the vine.

Raspberry jam takes a bit of work because you need to mush the fruit and because I don’t like a ton of seeds in my jam, I mush it through a sieve. The holes are big enough that you get the juice and the pulp but small enough to filter out the seeds. 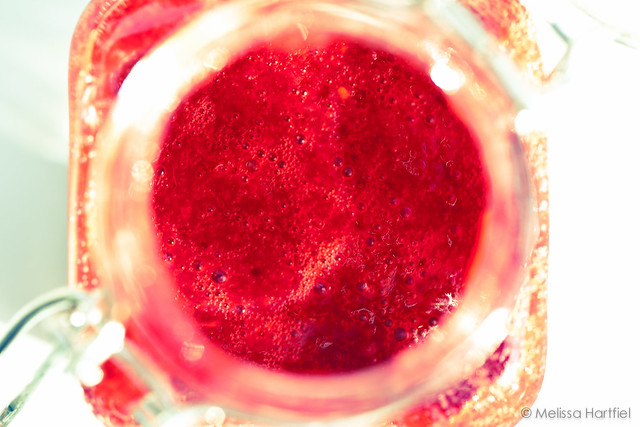 Even with freezer jam you still get a bit of the froth on a fresh untouched jar!

What’s that you say?  I could label the containers?  Huh?  Why would I do that when checking to see if there is seeds is a totally easy way to see which is which?

ANY-way… one of the things that always bothered me about this method was the amount of fruit wasted.  I’d leave the excess seeds in a bowl while I finished up and there would always be a little puddle of juice pooling around them and I’d think “how can I get more juice”

Because, the juice is the best part.  You can add it into all kinds of things: tea (hot or cold), lemonade, yoghurt, drizzle it over fruit or ice cream.  I never sweeten it with sugar to make a simple raspberry syrup although you totally could.  I use it just as is – it’s thick and oozy, almost syrupy in it’s own right because it still has some pulp in it. 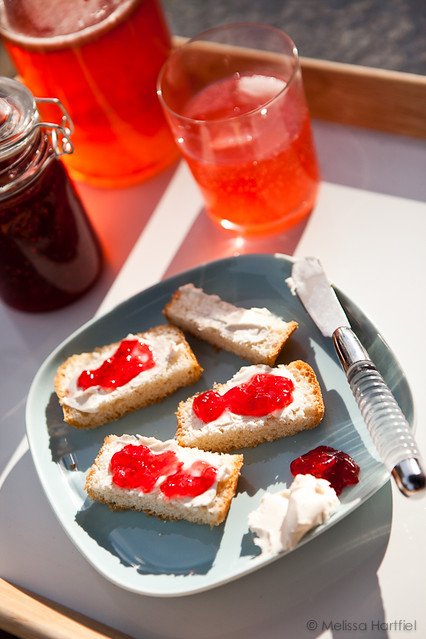 raspberry jam with some cream cheese and raspberry lemonade.

So now, I mush up what’s left in a finer sieve, with a spoon and let it drain as long as it needs to and put whatever I get into a jar and store it in the fridge for a week, using as needed.  It adds such a lovely, deep colour to so many things and you only need a little bit.

The drink in the photo is lemonade, fresh raspberry juice and a touch of Sprite for a little fizz.  It’s one of my favourite summer drinks 🙂

The photos were all shot late in the day with the sun quite low in the sky which caused some dramatic shadows, which I wanted, especially the drinks shot.

This was shot on my deck and was directly backlit by the setting sun which showed off the colours of the drinks so beautifully.  I hadn’t planned on photographing anything that night but when I saw the light on the lemonade, I had to change my plans!

One thing I did learn – if you’re backlighting a drinking glass like this, it’s going to show off every finger print, every scratch, every nick so if this is for a commercial shoot, use brand new glassware and only touch it with gloves! Or, be prepared to spend ridiculous amounts of tedious time in Photoshop removing them.  I did neither of these things!

Both 2 & 3 were “playing around” shots that I did for practice and then I ran them through a couple of Lightroom Developer Presets (just standard ones that came with lightroom) just to see what would happen.  I kind of like the look on both of them.

Image 4: This is an interesting photo because, my EXIF data tells me it was shot at 63mm.  I don’t know how I managed to do this because I only shoot food with one of two prime lenses: a 50mm or a 100mm.  I can’t zoom in or out with either of these.  I’m curious!  Any ideas?  I’m not sure I trust the rest of the data for this shot – it all seems a bit off.

Anyway, I wanted one shot with all the different bits and pieces in it and I wanted the strong shadows, just for something different.  I kind of like the angle I shot it on too but my focus could have been stronger.

That’s it for today everyone.  If you all lived within walking distance, you can rest assured you’d be finding a jar of raspberries on your doorstep!