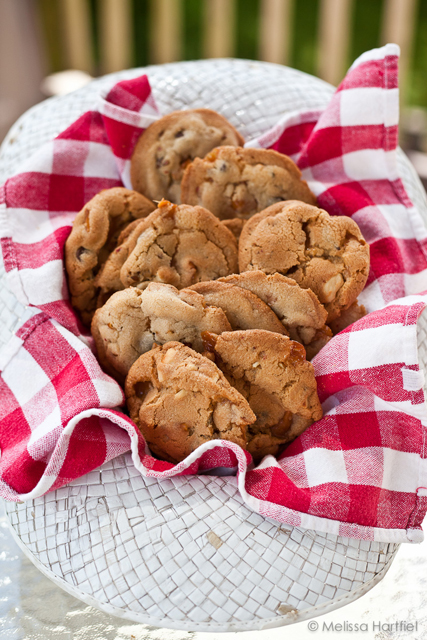 Wow! Now that’s a whole lot of stuff going on there isn’t it?!

That’s right, this is post 100.  A little less than a month shy of my 1 year anniversary.

So to celebrate, we’re gonna whoop it up with some Cowgirl Cookies!  Yee haw!

It’s actually pretty good timing because tomorrow morning I’m heading off to Banff for 5 days.  It’s the tail end of the Calgary Stampede, which I’m not attending, and the very beginning of married life for one of my oldest friends.

Yup, Shellibean is tying the knot in Banff to her long time beau, Corporate Craig.

I’m in charge of the Fuji Instax photos for the guest book.  That’s what happens when you’re a big time photography talent. hahaha. ahem… hmm… right… moving on.

So, in the spirit of Stampede week and because Michelle will not let me wear a big white floppy hat or go barefoot to the wedding, I thought we’d have some cowgirl cookies, served up by my once a year attempt to be a sorta cowgirl (by the way, I am soooooo not a cowgirl.  Horses freak me out.).  At least this way I get to wear a hat. 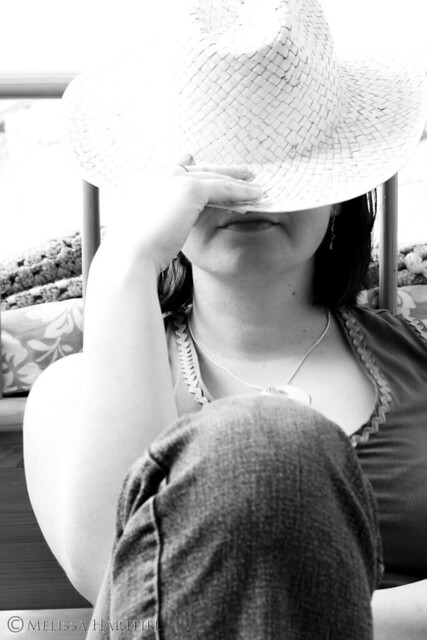 I wanna be a cowgirl... and I'm barefoot in this photo

As an aside, the wedding is in a field, not a church.  I would wear shoes if it was in a church! And seriously, what is wrong with a big white floppy hat?  It’s very English and she’s half English so come ON.  Bah. Weddings.  😉

I found the recipe for Cowgirl Cookies on Scarletta Bakes and immediately knew I had to try them.  They have everything in them: pretzels, caramels, peppercorns, cashews and I threw in some chocolate too, even though her recipe didn’t call for them: 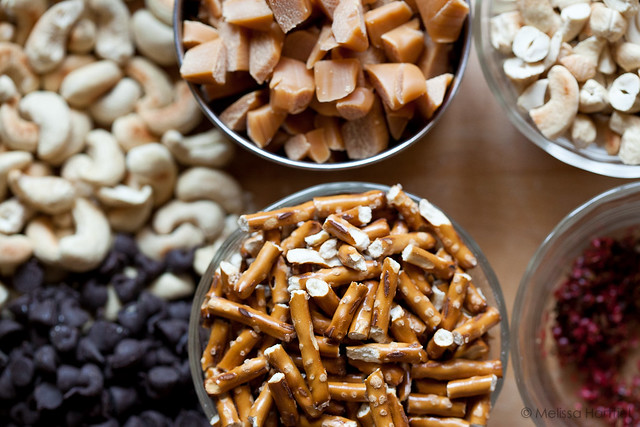 They also have flax seeds.  Which make them healthy.  And I love me some healthy cookies!  It means you can eat a lot of them!

There are times, my friends, when you may find that a handy 40 inch reflector or a giant piece of foam board are not close at hand.  It happens sometimes.  Believe it or not, not every home kitchen comes equipped with these items.  So, you have to improvise. 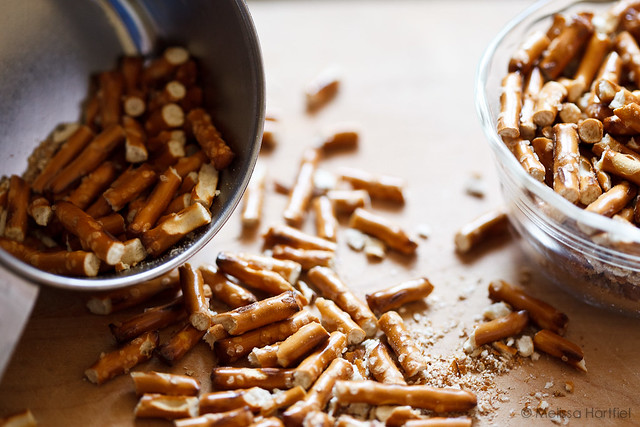 When I shot this photo, I wanted it backlit and had everything precariously balanced on a chopping board on my sink.  I realized very quickly after a test shot that the backlight meant the inside of the measuring cup was going to be way too dark.  Because of the location, I had nowhere to prop a reflector or foam board so I wasn’t too sure what to do.

Funnily enough, when I looked around, I noticed my iPad, with it’s little stand, sitting on my counter, with the Scarletta Bakes website pulled up.  Guess what?? The background of her blog is a lovely bright white!!  The iPad propped up perfectly in the tiny strip of counter top and I got my photo! Yeah, a reflector would have been better but it worked.

Here here for iPads and clean and simple blog backgrounds!! 😉

White Balance is a bit mystifying for most people, myself included, and it often gets ignored because people don’t know what it is.

Basically, different types of light have different temperatures associated with them.  They can throw colour casts in photographs – like when a photo feels too blue (cold) or too orange (warm).  The human eye is much smarter than a camera and can adjust to the temperature of the light so that it always sees white as, well… white!

Cameras find it harder – they need to be told what’s white.  Enter the White Balance function! DSLRs and a lot of Point and Shoot cameras give you the opportunity to change White Balance modes.  Photographing with the Auto White Balance will often work just fine but sometimes, you need to move to using one of the other modes.

The range offered on most cameras includes: Daylight, Cloudy, Shade, Tungsten, Fluorescent and Flash.  Using one of these will often warm up or cool down the shot.

For most food bloggers who struggle with indoor lighting during the winter, which can often make your photos look a horrible orange colour, you might want to try setting your WB to Tungsten.  In normal light situations, it will throw a very blue cast on your photo, but with incandescent/bulb lighting, which is usually very warm, it will really work to get rid of most of that orange glow!

There are also times where even using your cameras WB modes won’t do the trick and in that case, you may need to set it manually.  I’ll expand more on this in a future post.

What I wanted to point out here is that White Balance can also be used as a creative tool.  Sometimes it’s fun to shoot something with a completely out of whack WB just to see what happens.  You may be very surprised! 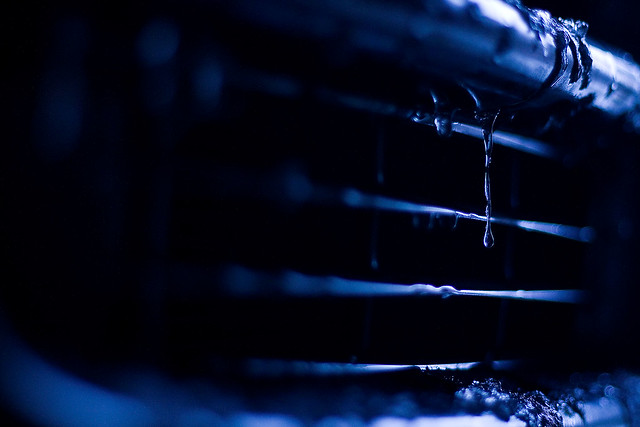 The above photo was taken with the White Balance set to Fluorescent.  It adds a bluish cast to the image making it feel even colder and more wintery.  But I was shooting outdoors in mid-afternoon!

Below are two versions of the same photograph of the peppercorns.  One is using Auto White Balance and the other is using Daylight.  I shot the photo with auto and tried changing it to Daylight in post processing to see what kind of change it made.  I couldn’t decide which I preferred! 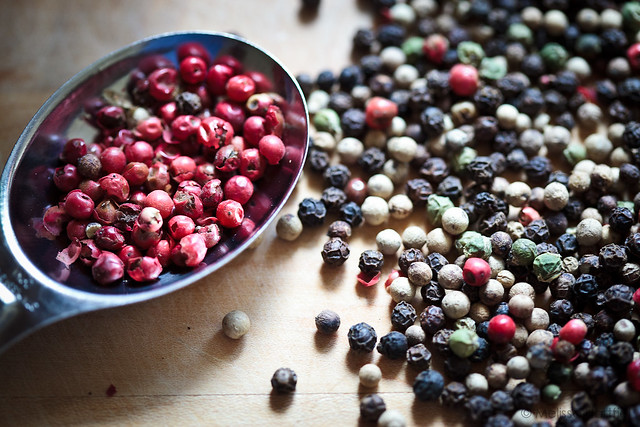 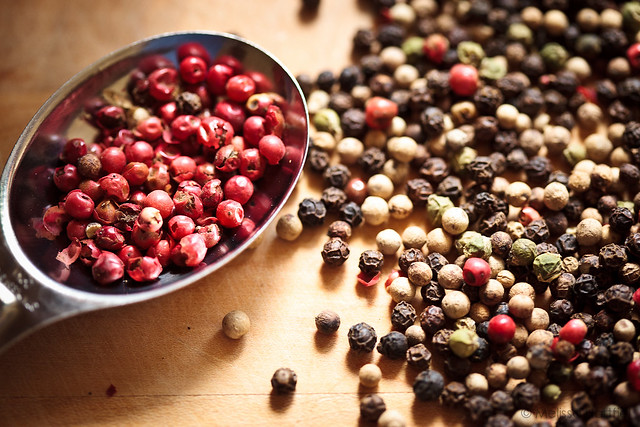 The Auto setting does give a much better representation of the actual scene as my eye saw it.  However, the daylight setting added some additional warmth to the photo which could be used if you wanted to give the photo a more rustic, firelit type of feel.

There is no right or wrong with white balance – it just depends on the type of photograph you want to come away with and what you’ll be using it for.   So it really is worth experimenting with it – and doing that will also help you gain a better feel for what each of the modes will do so that when a situation arises where you do need to adjust your WB, you’ll know how to!

But in the meantime, check out Scarletta Bakes to try out these delicious cookies! 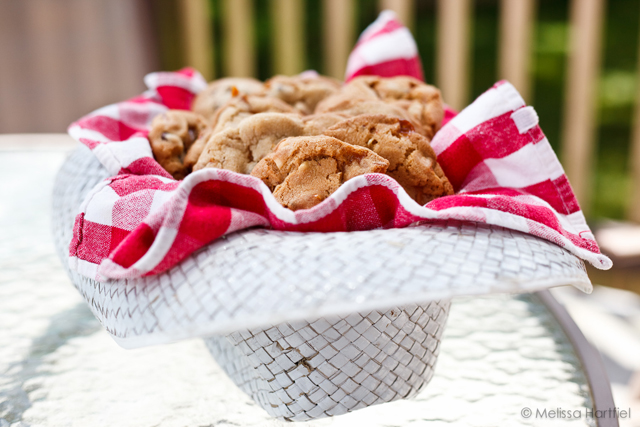 In the meantime, I’ll be back next week after the wedding!  Have a great weekend everyone!