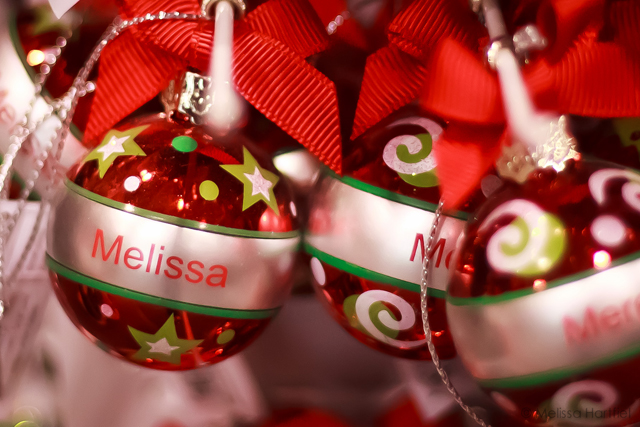 Merry Christmas to me!

I spent many years as a retail buyer/manager and I can tell you that for people in that capacity, Christmas runs 10 months of the year.  It can lose its lustre pretty quickly if you’re not careful!

Fortunately, that’s not really my world anymore 🙂  But I still get reminders of it from time to time – I was in Toronto as part of the event management team for a retail trade show.  Lots of Christmas buying going on!  And lots of Christmas-y things to look at, which I love. 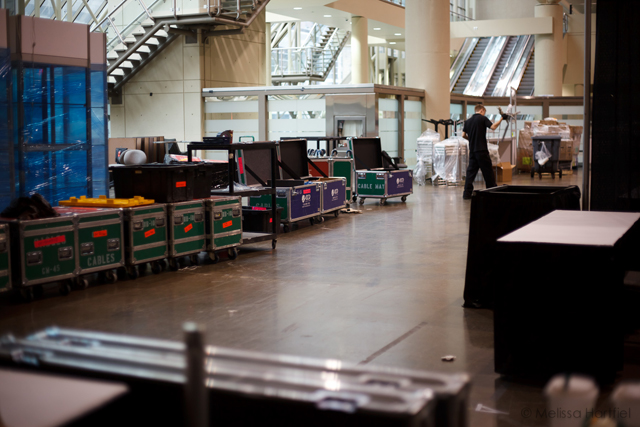 Our gear: rolling cases of servers, cables, switches, power bars, laptops, mice, keyboards, everything you need to build a network

I project manage the IT component of the show and I have a great group of guys on my team – most of our work comes during the setup portion of the event which is why we work some crazy hours prior to the event opening.  Once things are up and running smoothly, I often get a chance to browse.  And it usually means once the event is under way, I get to eat normally!

On days where we’re loading in a show, we don’t get much time to eat – definitely no time for a sit down meal in a restaurant.  Fortunately, right across the road from the MTCC, next to the CBC, is a shopping centre with a big food court with a lot of options.  On the recommendation of one of my crew, we decided to give Green Curry a shot.  I wouldn’t normally blog about mall food except, well, this one was great! (no, I’m not a food snob – I eat mall food, I just rarely blog about it)

The lineup to order was testament to the quality of the Thai food.  I had the daily special – chicken with veggies, vermicelli, gravy and a spring roll.  It was a decent portion for a very low price.  Definitely one I’ll add to my list next time I need to eat quickly or grab takeout.

This was perhaps the crown jewel of all my Toronto dining experiences, past or present.  Lai Wah Heen is located inside the Metropolitan hotel, just in behind city hall.  I’d heard good things about it from others and then my step brother, Henry, put it on his list of places I could choose from to go for dinner with him! (Henry loves food, probably more than just about anybody I know – his lists are always good). 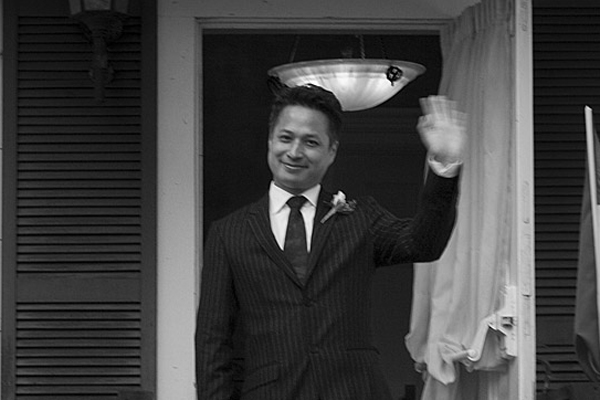 A rare family appearance on the blog - my step-brother Henry (the youngest of my three brothers). He's waving "hi!!"

This isn’t a place to go if you’re budget conscious.  Our bill came to just under $200 for the two of us and that only included one cocktail each.  The food, however, is mouthwatering.

I wasn’t sure what to expect as most of the reports I’d heard were about their Dim Sum and we were there for dinner.  If I could think of a way to describe it, it was like a very modern take on dim sum, beautifully presented and served.  Also, not exactly the type of place you pull out your great big DSLR.

We started out with (and I can’t possibly hope to recreate the Chinese characters so I’ll just give you the descriptions from the menu) thin beef tenderloin flavoured with honey pepper sandwiched with a warm rice crepe.  It was like eating a messy savory smore.  The dish came with all the pieces separate: the tenderloin in the dark rich honey pepper sauce, the warm soft crepe, what I think were finely chopped brilliant green chives and a crispy wafer of some kind.  Our waiter showed us how to put all the pieces together to make a sandwich and then instructed us to eat it with our hands!  It was sloppy and delicious – all the different textures and the honey pepper sauce was the perfect combination of sweet and tang. 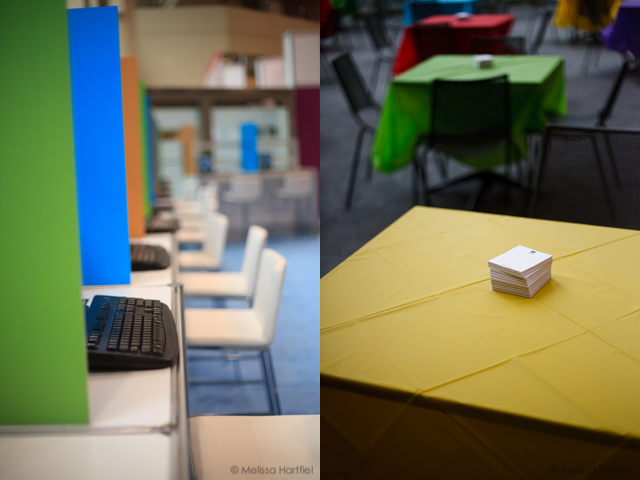 It was a very colourful show...

We ordered four other dishes to share for our main meal including wok fried prawns topped with crab meat sauce, which were perfectly cooked and wrapped around the crab meat sauce that was so flavourful that I was secretly very happy we chose crab and not lobster like Henry was itching for (but would have put the bill way over the top).

Our rice dish was foie gras and diced shredded duckling fried rice flavoured with deep fried garlic.  I’ve never had foie gras, oddly enough, but I love duck and this was also delicious (everything was delicious, just so you know!) although, I really couldn’t taste the foie gras.  Is that what foie gras is like?  The duck was perfect with the garlic and writing this is making me want more!

I insisted on a veggie dish and Henry gave me this one…wok-fried zucchini in garlic sauce.  I don’t think it was his thing because I got to eat almost the entire dish myself.  Not that I minded.  I adore zucchini and this dish used green and yellow zucchini, which I’ve never had before.  It had a slightly squash-y taste to it but still very much zucchini.  It was cooked perfectly – tender but crunchy around the edges. 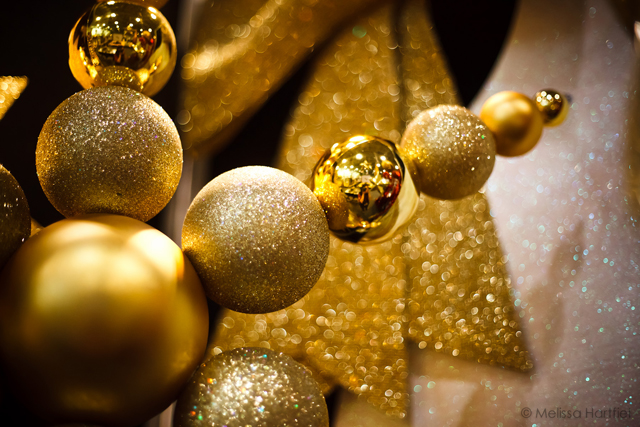 More Christmas decor... if you look closely, you can see me!

But, I think our favourite dish was the pinwheel of roasted pork marinated with mustard and rosemary.  The pork was so thin it was almost shaved, and had been stuffed with a rosemary mustard filling.  the edges were cooked to a perfect crackly, crisp texture that almost felt like pop rocks in your mouth but the inside was so tender it practically melted on your tongue.

We finished every bite put in front of us.  The portions are not large at all – perfect for two people.  If we’d had more friends we’d have had to order considerably more food.

We also had to experience a tea service at Henry’s insistence and being a tea junkie, I was ok with that.  We each picked out our tea, quite a process.  I had the Lychee Scented Red Tea because I’ve never had a red tea before, and Henry chose the Monkey Picked Oolong Tea (he liked that it had Monkey in the name).  This wasn’t a traditional Chinese tea service but our waiter made our tea for us at our table and poured it for us (thank god… my track record pouring tea in restaurants is terrible – I’m not called “spaz” by my friends for nothing).  I loved mine – it was different from anything I’ve ever had.  Lovely and soothing.

While Lai Wah Heen is out of my budget for most of my dining experiences, it was a wonderful treat and we enjoyed it tremendously.  Worth every penny.  The atmosphere is calm and quiet and lets you focus on the food and the company.  Next time, I really want to try the Dim Sum!

And As An Aside (look at all those As)

My last night in Toronto was spent having one big celebration dinner at Joe Badali’s with all the other event project managers.  It’s a spot I’ve been to many times, usually because they can accommodate a large group of people.  The food is always decent though.  But after, me and the only other member of my team who was in attendance, left to meet up with the rest of our crew at a terrific Chinese restaurant on Spadina that my Technical Lead had insisted we go to.  The food… mmmm… so good.  Unfortunately, I’d had a fair amount to drink by this time and I have no idea what the name of the place was!  But, I had a great time with my boys celebrating another great show.  Thanks guys!