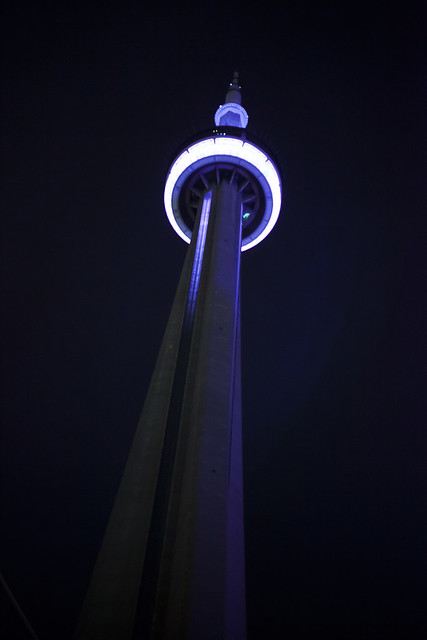 My hotel was right next door. Took this at night, hand held, with the new camera.

As I’ve mentioned previously, I took very few photos of food on my trip.  To give you a glimpse of one of my favourite aspects of Toronto, I’ve slipped in a few photos of some of the amazing (but threatened) street art you can see in the city.  You can read more about the situation at the end of this post.

My week in Toronto was full of so many contrasts – especially where food was concerned!

After a nice lounge around in Oshawa Saturday and Sunday, I was deposited at the Renaissance Hotel late Sunday afternoon.  That’s the hotel that’s part of Rogers Place – home of the Toronto Blue Jays, Toronto Argonauts and apparently, the night before, the biggest UFC crowd ever in N. America.  (Quite glad I missed that one actually…).

After checking in and finding out my client had put me in a beautiful suite (facing the Union Station train yard… not the stadium field – but no worries, the Jays were out of town), I didn’t quite know what to do with myself. I mean, after all… I had two big screen LCD TVs that I could watch at the same time…

But, I needed some supplies and dinner.  I need Pringles when I’m in a hotel.  I can’t explain it.  I just do.

The problem was, by the time I walked out the door it was pouring.  Not Toronto rain but Vancouver downpour type rain.  And I knew exactly where my umbrella was.  In the door pocket of my truck, sitting in the Vancouver International Airport long term parking lot.  I’m awesome.

Not to worry, I’m from Vancouver, right?  Rain/shmain.  Pffft. 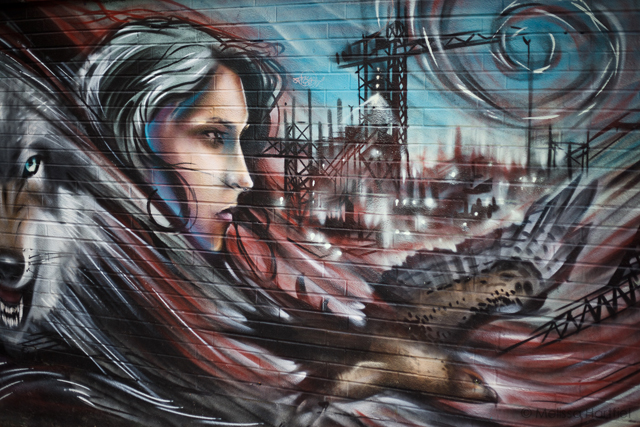 not exactly your average urban scrawl...

Problem: I did not bring a rain jacket with a hood.  But, again not to worry… Toronto has this great PATH network of underground passages so you can get where you need to go on foot without stepping outside!  That’s what I would do.  Except… somehow, I got lost in an underground maze with no way out.  At one point, I wound up inside the deserted Royal Bank tower at 7pm on a Sunday night with all the doors to the street locked… I was trapped inside a big glass tower like a fish in a fishbowl.

So, retracing my steps, I popped back out somewhere on Front Street and did a mad dash up to King and into the nearest drugstore where I bought my Pringles and, of course, an umbrella – a cute blue and  yellow one that was sooo out of place in a sea of Toronto black.  They really have no idea how to do rain out there.  By this point I was starving, soaking wet with muddy feet and was standing outside a Subway.  Turkey sub for dinner.  On my fancy bed.  Watching two tvs.  That’s living, baby.

Monday was my day to mess about.  I only had a brief morning meeting.  It turned out to be a beautiful day so my plan was to hit my favourite place to wander in Toronto: graffiti alley, running behind Queen Street West from Spadina to… well.. I’m not too sure where it ends actually.  It’s in a constant state of change so I always like to take a look when I’m in town at what’s new.

After that, a bit of browsing in Eaton’s Centre and then a late lunch with my friend Claire. 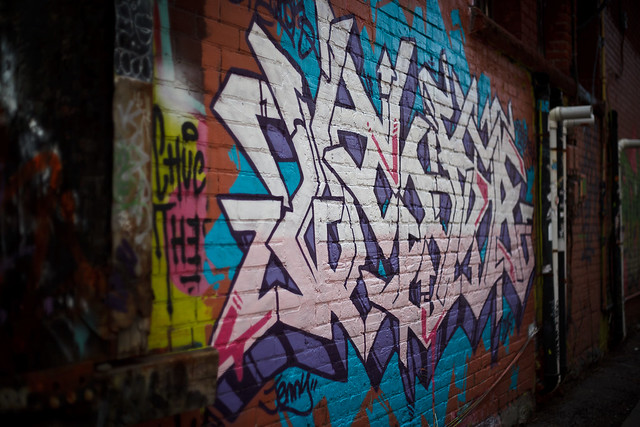 Claire and I go back to first grade.  I always try to see her when I’m in town.  She has a wicked sense of humor, adores Italy, and she loves dogs.  What else do you need?

We decided on Spring Rolls on Dundas. It’s a small chain that makes respectable Pan Asian dishes and fantastic mango martinis.  I usually go here with my step-brother Henry because of my partiality to the martinis and his inability to walk past without wanting to eat a Tornado Roll (they are good).  I don’t just drink the martinis. In fact, because it was a late lunch this time, I only had one.  And I enjoyed it.

I almost always have the Cantonese Chow Mein because it’s not greasy and it’s loaded with fresh veggies and meat.  It’s light but substantial  It’s expense account friendly too (and by that I mean, it’s very reasonable).  And they do a better class of take-out that’s easy to take back to your hotel when you don’t want to sit alone in an nice restaurant eating dinner. 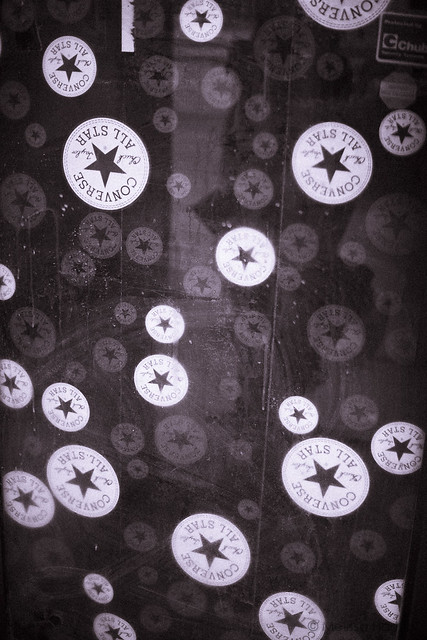 I've been up and down Queen St W so many times on foot and I've never noticed this. I'm proud of how it turned out!

The Keg on Adelaide

Later that night, I met up with my old manager from back when I was an employee for the company that was now my client for this trip.  We went to The Keg.  Very unoriginal given that the Keg’s roots are in Vancouver and they still do it better here than they do in Toronto.  They try to make it all fancy and upscale and uptight out there.  But the food is solid and as much as I have been craving a really good steak lately, my late lunch meant I had a spinach salad (albeit with the sliced sirloin on top) for dinner.   And of course, a Keg Caesar to drink!

The salad was delicious, a nice set of contrasting textures and flavours: mandarin slices, tart cranberries, sweet pecans and crumbled goat cheese all in a chardonnay vinaigrette with the thin sliced sirloin on top.  And as much as I wanted a slice of Billy Miner Pie (if you doubt the Keg’s BC origins, that name right there should take you back to BC Social Studies lessons), being 4000km from home without my Lactaid Pills (as well as stuffed tummy) meant it wasn’t worth the risk.

So I settled for one of their mini desserts, Passion Brule: a passion fruit infused creme brule served in a tiny espresso cup.  The Passion Fruit gave it a nice light taste and it was the perfect amount to satisfy my sweet tooth without pushing my stomach past it’s limits. 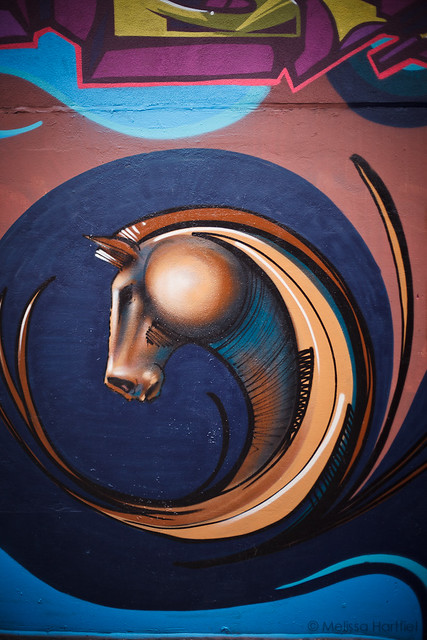 This is art... not an eyesore on the city. It took talent, skill and time.

Tuesday started at 4am with a granola bar from my hotel room stash.

It was a long, extremely tiring day that ended sometime past 8pm.  I was tired, cranky and miserable and wanted some peace and quiet.  So I high tailed it up to Queen St. in a drizzle to catch a little bit of comfort food at Cafe Crepe with the goal of being back in my hotel room, showered, in my pjs, with the hockey game on by 9pm..

Cafe Crepe is an old Vancouver standby before catching a show at the Commodore on Granville with their cheap but good $5 apple martini.  My go to crepes? Spinach and Feta for dinner and Strawberries and Nutella for dessert.  After a little chit chat with the two cheerful fellows making my crepes (you get to watch when you order takeout), I was in a slightly better mood.

With my precious box in hand, I walked the 6 blocks back to the hotel as quickly as I could, dropped it on the table in my room, hopped in a steaming hot shower and sure enough, by 9:01, I was warm, dry, clean, exercised and full of fresh air, in my pjs and ready to watch the hockey game.

And here was my smartest decision of the day… I ate my crepes in a chair, in the living room instead of on the big pristine white bed.  Spinach and Feta had faired well but… Strawberry Nutella??

It was a big, sloppy, glorious mess of strawberries, strawberry juice and chocolate-y nutella goodness, with bits dripping and oozing out of every pore.  Not having a plate or knife and fork, I had to use my hands.

I had it all over me.  I should have saved the shower till afterward.  As it was, I still had to go wash my arms up to my elbows.  And it was wonderful.  A great end to a very loooong day. 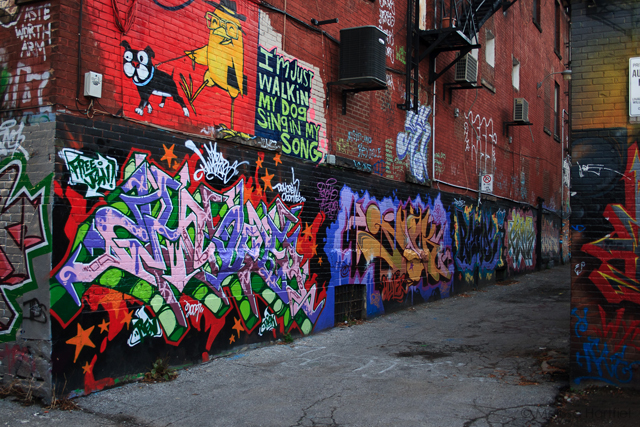 A Word on Street Art

There’s more coming on Toronto dining in another post but I wanted to mention a word here about the graffiti photos.

The images in this post were taken from an alley that runs behind Queen Street W.  If you don’t know it exists, you would never see some of the amazing street art that fills the walls.  It is nothing short of an urban art gallery, free and open to the public, always in flux.

My understanding is, the new Mayor of Toronto wants it all removed, at the expense of the businesses whose walls it adorns.  Queen Street itself is also home to a lot of graffiti – much of it gives the street it’s unique character and jives with the funky mix of the older brick buildings that house some of the city’s most creative people.  From TV stations to high end fashion mixed with art and design studios, vintage clothing shops, comic book emporiums, tattoo parlours, nightclubs and quirky restaurants – it’s a cultural hub.  It’s one of my favourite spots in the city – a city that feels like my second home.   And while I can understand that some of the graffiti in the city is an eyesore, much of this is not – it’s part of what makes this area breathe.  It would be tragic to see this work removed.