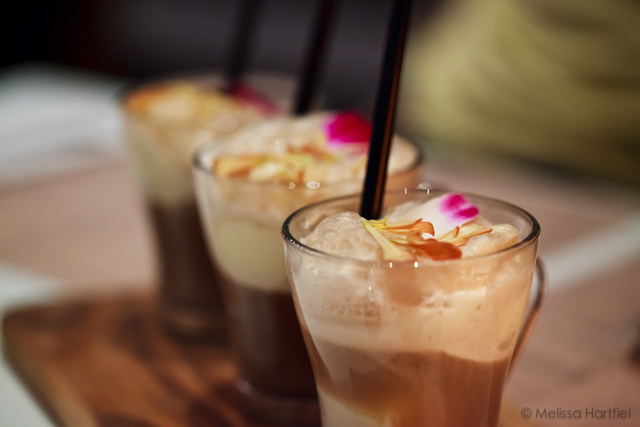 you try taking a worthy photo when the chef is sitting right next to you waiting to see what you've done...

Ok.  Here it is, the post y’all have been waiting for (that’s a little southern drawl, just for Ethan).  I know this, because this dinner was one of the absolute highlights of my trip and I was practically levitating with excitement all day leading up to it.

In fact, I was so excited, that I took a shocking lack of photos for the whole thing!

When Mardi from Eat, Live, Travel, Write heard I was coming to Toronto she sweetly invited me to dinner and how could I possibly refuse?  She’s Mardi!! Of course I jumped at the chance – I knew the company would be good and that she’d find somewhere with great food.

Knowing Ethan, from Feeding Ethan, wasn’t too far away, we invited him to join us and he willingly obliged.

And ACKK!! We had such a good time.  I know you’re all dying to know so I will just tell you now.  The two of them are as nice and adorable in person as they come across on-line. And yes, ladies, Ethan is handsome.  It’s not an internet mirage. (and don’t pretend you weren’t wondering because I know, for a fact, that several of you were!)

I had to work till 6:30 so Ethan and Mardi entertained themselves by photo prop shopping along Spadina in Chinatown (which I have only just begrudgingly forgiven them for doing without me because they brought me a present, which I will share with you another time).

Mardi chose O&B Canteen as our restaurant and it was a perfect choice: casual but funky, good value and wonderful food.  Located on the corner of King and John in the heart of the entertainment district, Canteen adjoins the TIFF Bell Lightbox and sits downstairs from it’s cousin, the fine dining restaurant, Luma.  Both are run by executive chef Jason Bangerter and due to a twitter post by Mardi, we had the opportunity to meet him in person!  In fact, he personally made our reservation for us 🙂 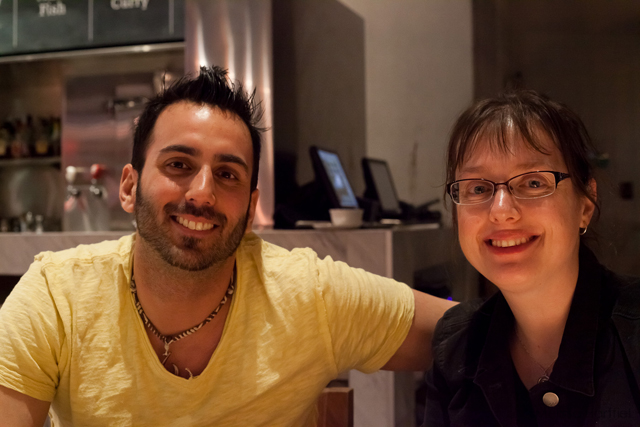 There it is, the money shot you were all waiting for. Are they not just too cute? And just as lovely as they are adorable.

We wound up with a window seat with a great view of King and John and a very patient waiter who was very tolerant with our… state of distraction at having just met. (What?  Oh… you want us to look at the menu… right… ok… in a second.  We’re on it.).  And then when Chef Jason came out to say hello, well, it was another distraction… but eventually we managed a drink order!

We started out with a sampler of the Thai Coleslaw, Beet Root, Tomato Watermelon and Quinoa salads, which were all delicious but, for me, a non-beet loving girl, the stand out was the Beet Root.  I’m now a fan.  Hands down my favourite.

We moved on to the main course and Mardi chose wisely (just like Indiana Jones in The Last Crusade) with the Frattau pizza, which I’m sure she’ll tell you about at some point.  Ethan and I (and I confess, I chose this before we even got to the restaurant when I perused the menu on-line) both had the Mac & Cheese with smoked ham.

Mac & Cheese.  My comfort food.  Out of a box or gourmet.  I can’t get enough.  I’ve never met one I didn’t like.  Add some ham and well… I melt.  I know that I’ve laid claim to the world’s best mac & cheese recipe ever in the past and I still think mine’s in the top 5, but Chef Jason may have me beat.  And that’s saying something.  I know my mac & cheese.  Rich, creamy but with a sharp cheddar bite and the added texture and dimension of smoky ham.  Ethan said it best when he said it was like getting a warm hug from your food.  I couldn’t finish mine and so I ate it cold for breakfast the next morning (my hotel room had a fridge) with a stir stick for a fork.  (if the chef ever reads this, I’m sure he’ll cringe).  And I don’t care.  Because it was just as good stone cold as it was warm and ooey and gooey.  The cheese was even sharper and gave it a great zing.

After polishing off our mains, Chef Jason wandered over with a glass of wine and sat down with us for a chat about food, his restaurant, and Ethan and Mardi’s prop finds.  He was quite charming.  Mardi had been eying the rootbeer float on the menu since we walked in the door so he had three miniature ones sent out for us as well as dish of Lemon Posset for me when I told him I couldn’t eat ice cream.  And then, I caved and took out the big gun and took a photo of the food, with the chef sitting next to me waiting to see what I came up with.  I think I did ok but, you know… no pressure or anything!  haha.  My old camera could not have taken either of these photos without a lot more gear so I’m pretty pleased.

Anyway, it was a lovely evening with two kindred spirits who I hope I have the chance to share a meal with again in the not too distant future.  I will tell you this… we have a cunning plan in mind.  There was plotting.  And scheming.  And evil laughter.  And we hope to share it with you all soon.