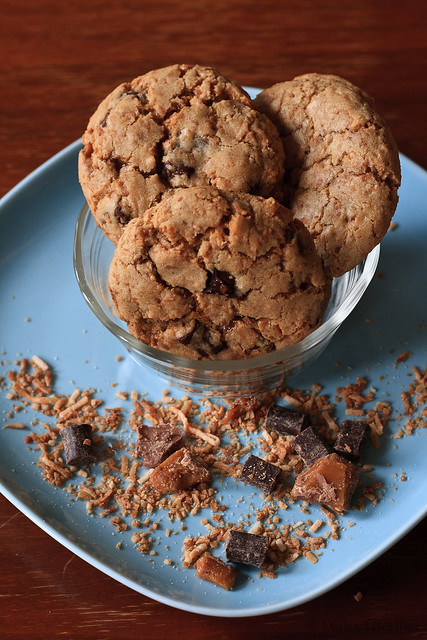 I love Two Peas and Their Pod.  Maria makes the best cookies.  Her recipes have never failed this cookie monster.  She has over 100 of them and this is the third I’ve tried.  I think it might just be my favourite.  It has only good, yummy things in it.  And by good, I don’t mean healthy.  I mean tasty.  Don’t confuse the two. 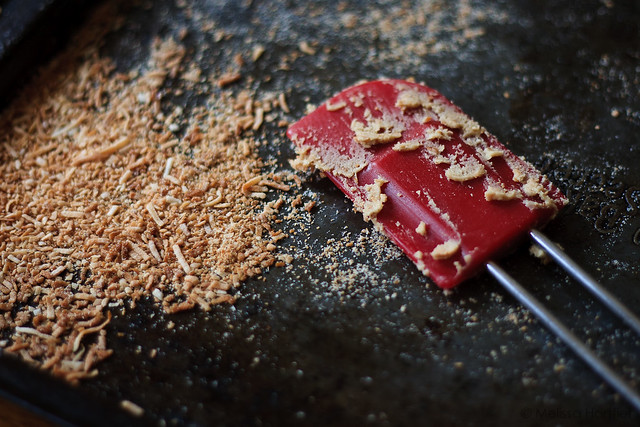 Toasted, sweetened coconut takes me to my happy place

You start off by toasting coconut.  And that makes your whole house smell good before you even start working on these cookies.  It’s a fine line though, between toasting it and frazzling it to a burnt crisp – so be careful. 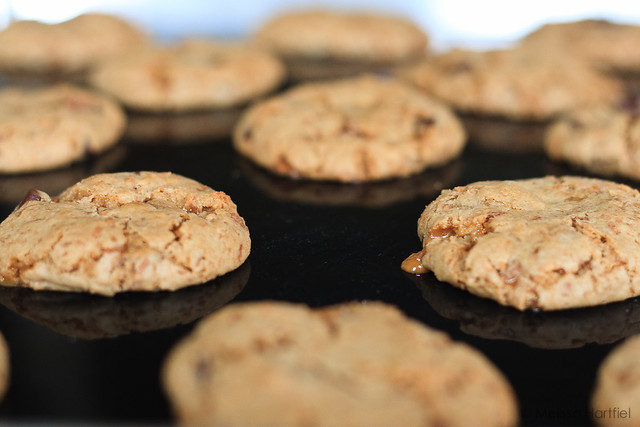 I think these cookies might just be my kryptonite.  I love cookies but I’m pretty good at only eating one or two a day.  Not these.  These are, well… I’m embarrassed to say how many I’ve eaten in one sitting.  Let’s leave it at that.  I loved them so much, that I tripled the batch and made them as part of my Bake For The Quake goodies. 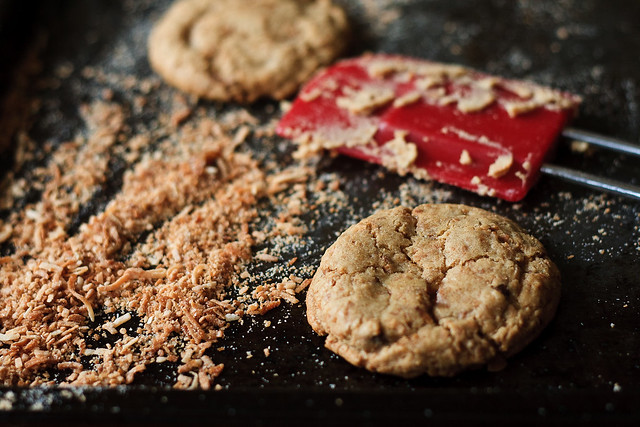 If you want the recipe, go visit Josh and Maria at Two Peas.  I made mine with Skor bars and found it took 4 bars to make enough toffee bits.  And it was a lot of fun putting them in a bag and smashing them up with a big wooden spoon (I actually broke one in the process).

I also splurged a bit and used Ghiradelli chocolate chunks instead of regular chocolate chips.  I think I will wait a while before I make them again though.  Just for the sake of my waistline.

So, I know some of you know that I just upgraded my camera.  More on that in a future post.  But these were all taken a few weeks ago with my old Rebel.  I have a few more posts waiting to be written with older photos so nothing with the new camera just yet.  Still a bit of a learning curve going on there!  These are, however, some of the very first images I post processed in Lightroom, which I’m really enjoying.  As a post production tool I find it very similar to Adobe Camera Raw, but better.  Having said that, I didn’t do much, just some clarity/contrast/sharpening adjustments.  I didn’t move to Photoshop at all – not even for sharpening or watermarking

All images were shot in AV mode.  These were also all taken before my “food photography in a rut” post but I think you can see I was already starting to edge away from what I’d been doing in the past.

Image 1: 50mm, f5.6, 1/80th, ISO 400, no exposure compensation.  I’m rebelling against overexposure! Haha. Natural light from the left.  Finally smartened up on my aperture setting.  No reflectors, although using one wouldn’t have hurt.

Image 2: 50mm, f2.0, 1/160th, ISO 400, no exposure compensation.  Natural light from the top.  The pan is on an angle and is being propped up with a bunch of newspapers piled underneath one end.

Image 4: 50mm, f2.8, 1/200th, ISO 400, +2/3 exposure compensation. Natural light from the left and yes, this is actually over exposed.  It was just too dark otherwise.  Styling tip – sometimes, it pays off not to wash your dishes right away, or put things in the dishwasher.  Adds a little character to the shot.

6shares
Spring Equals New Beginnings
The One With A New Camera