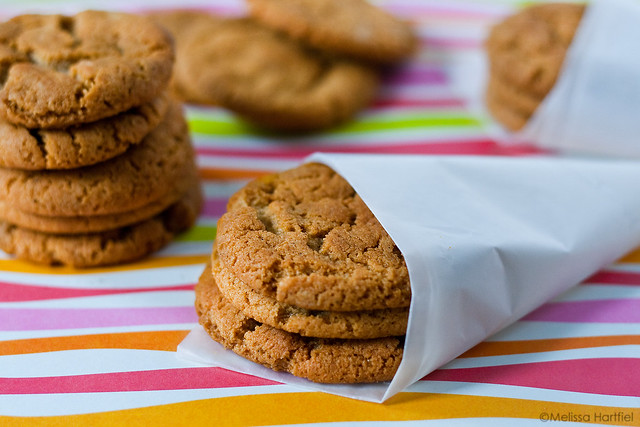 I know that a lot of fun is often made about British cuisine. But I will tell you something: there are things the UK gets right:

Actually, my last trip to London was in 2008 and I can honestly say, the food scene has improved dramatically.  However, I warn you against eating sushi there.  Not a good experience.

My mum is from the UK – she is a chocolate fiend.  I come by it very honestly.  I spent some time living in London after university and I indulged in every wonderful British sweet I could lay my hands on: sticky toffee pudding (my all time fave), banoffee pie, english sherry trifle, orange aero bars, lots and lots of Cadbury’s chocolate (which fortunately is abundant in Canada), strawberries and real Devonshire cream, every sweet (candy) you can imagine and biscuits.

Lots and lots of biscuits.

To drink with tea of course! Perhaps this also explains why I don’t drink coffee!

One of my favourite parts of one of my favourite movies, Love Actually, is when Natalie, the tea girl at #10 Downing Street, (Marine McCutcheon) tells the new Prime Minister (Hugh Grant), that if the other fellow had won the election, she’d still have been nice to him but, she wouldn’t have given him the chocolate biscuits – just the plain ones.  This is when you know you’re loved – you get the chocolate biscuits.

So when my cousin Cat, who lives in Southampton, asked me if I’d like to try one of her biscuit recipes for my blog, of course I said yes!   Although, I have to confess, even though I consider myself bi-lingual in Canadian and British, biscuit still makes me think of, well, biscuits!  Like the southern, savory kind.

The recipe she sent was for Cornish Fairings.  I had no idea what a “fairing” was.  And the instructions were all in metric, which threw me off, because even though we’re very metric here in most things, recipes is not really one area that’s caught on.

So I read on.  Self rising flour.  Hmmm… nope.  Don’t have that.  Caster sugar.  Hmmm… what is that?  Mixed spice.  Hmm… but what does mixed spice mean?? I have lots of spices in my cupboard.

So I improvised! And, I have since discovered that caster sugar is what is sold here as Berry Sugar – it’s just a finer variation of granulated sugar.

I didn’t use self-rising flour because it’s something I never buy and the recipe already called for Baking Powder (although, it is very easy to make your own if needed)

And mixed spice?  I just used All Spice.

And I’ve also found out that Fairings is a word used to refer to treats sold at local fairs – what a great word!

These are wonderful – very small, very thin, very crispy on the edges but lovely and chewy in the middle.  And mine did turn out orange looking – that’s not weird photography!

So here is the recipe, Cat’s version is posted first, my list of ingredients is posted after but I followed her instructions.  And thanks Catherine! These were scrummy-yummy! 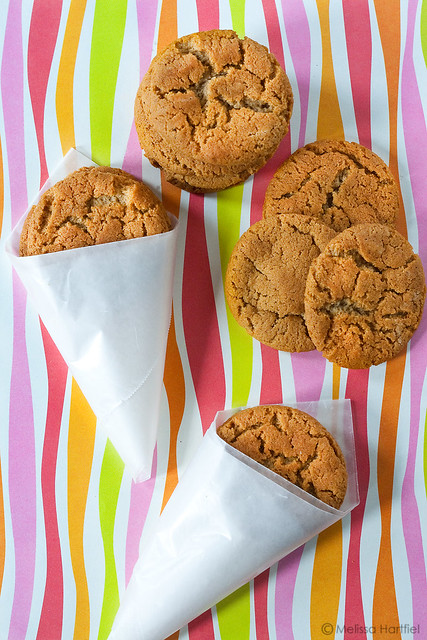 wrapping them in wax paper cones made me feel like I was at the fair!

The recipe makes about 20 very small cookies so you may want to consider doubling it.

1. Preheat oven to 200C (this works out to approx 395F)
2. Sift the flour with salt, baking powder, bicarb of soda, ginger and mixed spice
3. Rub in the butter by hand until the mixture looks like fairly fine breadcrumbs
4. Stir in sugar
5. Warm the golden syrup and add it to the other ingredients.  Mix well to form a stiff consistency
6. Roll into small balls and spread out on a baking sheet so they have room to spread when cooking (for thinner biscuits, flatten before baking – makes nice crispy ones)
7. Bake in the oven for around 7-8 minutes.  The fairings will be soft when you take them out of the oven, and then firm up as they cool to become crispy

I weighed my ingredients out into a measuring cup so they’re pretty accurate.

Both images were shot in AV mode.  I used the bright stripey scrapbook paper and wrapped the cookies in wax paper cones as my tip of the hat to an old fashioned country fair.  I’m also going back to what really tickles me as a photographer – bright colour, high contrast images.  I’ll discuss more on that in a future post.

Post processing on both of these cookies was a little trickier than I usually do – not time consuming, but definitely more intricate.  I’m thinking of doing a post on how I did it so you can all see.  Would you like that?

Image 2: 50mm, 1/125, f7.1, ISO800, +2/3 EV.  Note my unusually high (for me) ISO.  800 can be a bit iffy on my older model camera but most of the newer ones can handle it easily.  I bumped it up due to the high f stop and the need to hand hold the camera.  Remember, the higher the f stop, the less light the camera allows in so in this case, with only natural light, I had to bump it up.  If I had a decent lighting setup or a taller tripod, I could have managed with a lower ISO.  Fortunately, there isn’t a lot of grain.  I also used a white reflector at about 2 o’clock on the photo.  The light was coming from the left.

240shares
Peppermint Cheesecake Brownies and an Update
Is Food Photography in a Rut?