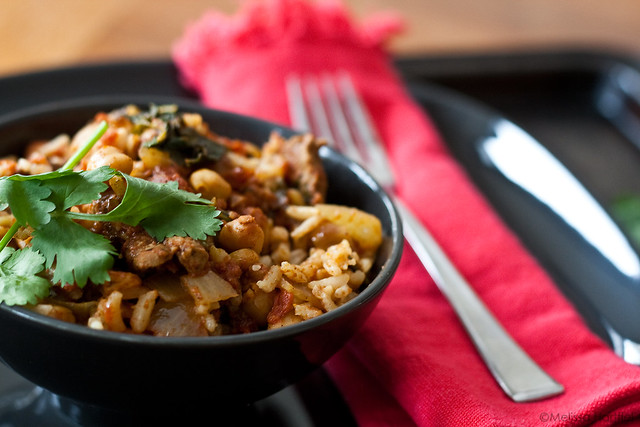 Fast, comforting and oh so tasty!

I have a confession to make: most of the time I’m a make ahead blogger.

What I mean by that is, because the focus of my blog is food photography and light is scarce in winter, I often do most of my cooking, shooting and writing on the weekends. (oh… I cannot wait for summer to get here!).  I can edit photos and write posts ahead of time and schedule them throughout the week when work has me too busy to worry about dinner.  And that’s why what you usually see from me is baked goods.

Truth be told – I actually prefer cooking to baking, especially in winter when comfort foods like soups, stews and casseroles get their time to shine.  A good curry is perfect!  Just recently, I made one of my go to meals for when time is short but something warm and comforting is called for: Chickpea Beef Curry.  For some reason, I decided to take the extra time to take a few pictures, despite bad light.

I planned to blog it this week but hadn’t gotten around to writing the post and then I received a tweet from the folks at Eat, Write, Retreat, an amazing sounding food blogging, food photography and food styling conference in Washington DC this May, reminding me that Canadian Beef was sending five lucky random foodbloggers to the conference if they share a story or recipe about Canadian Beef.

Well, I love food photography and styling, I love my beef and I happened to have a handy post of one of my favourites almost ready to go! Fortuitous timing methinks!

This is a pretty hearty dish – the beef absorbs the curry and tomato flavours and the chickpeas make it filling enough that you don’t need to serve it with anything else.  This night I did make a side of rice, but usually I like to serve it with warm Naan bread – there’s lots of juices that need sopping up!

The recipe is a worn out magazine clipping I’ve had for a few years.  I was sure it came from Appeal Magazine – the quarterly magazine put out by the Overwaitea/Save-On supermarket chain here on Canada’s west coast but when I look at their recipe archives I can’t find it.

Here is my version with a few tweaks from the original – and it makes a LOT – the recipe suggest making Curried Beef Wraps with the leftovers, which I’ve also tried and they’re so tasty! 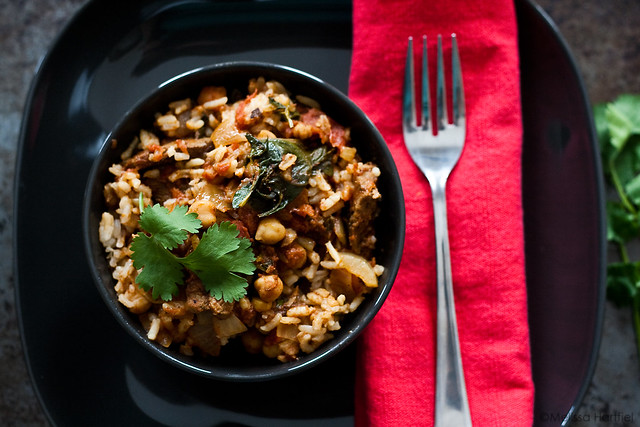 1 tbsp olive oil or canola oil
2 lb or 1kg beef sirloin grilling steak (or marinating steak, which is what I usually use)
3 cloves of garlic finely chopped or crushed
salt and pepper to taste
2 tbsp mild curry paste (or kick it up a notch with a hotter one – just remember, you’ll have lots of leftovers so make sure it’s spice you can handle!)
1 28fl oz or 796ml can of diced tomatoes
1 19fl oz or 540ml can of chickpeas drained and rinsed (if you can’t find chickpeas, try looking for garbanzo beans – they’re the same thing)
1/2 cup chopped, fresh cilantro – if you like cilantro don’t be afraid to up the quantity
2 cups of baby spinach leaves, packed
1/3 cup cashew coarsely chopped and toasted

Cook beef in batches with garlic and salt and pepper to taste until browned.  Remove from the pan and set aside.

Add curry paste to the hot pan and cook, stirring constantly, for about a minute, until it becomes fragrant.

Add tomatoes and their juice and stir until well combined with curry paste.  Allow the tomatoes to simmer, uncovered for 8-10 minutes.  Stir occasionally until thickened.

Add chickpeas, cilantro and beef mixing into tomatoes until hot.

Add spinach and stir for 2 minutes or until spinach is wilted – don’t overcook the spinach!

Serve with rice or warmed Naan bread and sprinkle with toasted cashews.

Both photos were shot on a jelly roll baking sheet for the background.

Image 1: 50mm, f3.2, 1/20th, ISO400.
This was shot with a tripod, given the slow shutter speed, in AV (aperture priority) mode.  Light was all natural from the window to the left.  Post processing was a minor bump in contrast and my regular sharpening treatment.

Image 2: 50mm, f3.2, 1/50th, ISO400, -2/3 exposure compensation.
This was also shot with a tripod in AV mode but the shutter speed was fast enough that it could have been hand held.  I did make a mistake here – my aperture setting (f-stop) was too low.  I’d have been better to bump it up to the 4 or 5 range to have the fork in better focus but still keep the cilantro off to the right a bit fuzzy.  Generally with overhead shots you want to have a higher f-stop to keep more of the image in focus.

Post processing was a minor bump in contrast and my regular sharpening treatment.  Notice the -2/3 exposure compensation – over exposing food seems to be a trend right now and I often like the look – in this case however, overexposing the shot would have created far too much glare off of the particular dishes I chose.  It’s just a reminder that there are no hard and fast rules!