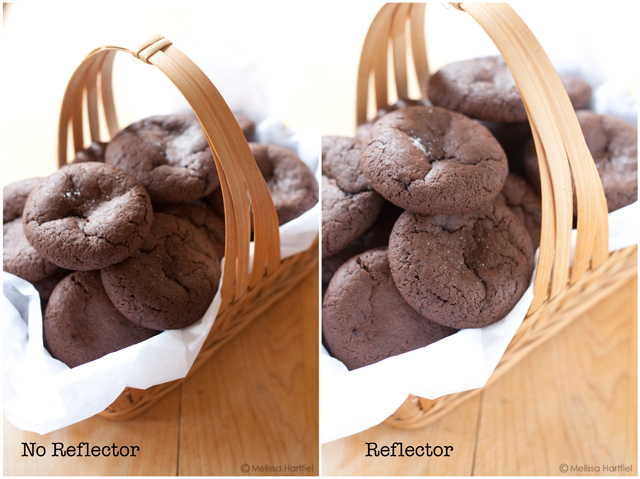 After photographing the delicious salted caramel chocolate cookies on the weekend, I had a few shots  that really highlighted the effect a simple reflector can have on a photo and I thought this would be a good opportunity for a food photography tip.

What is a reflector?

First things first, right?  What exactly is a reflector?  Well, in a nutshell, it’s anything the reflects light!  It can be a mirror, a sheet, a piece of foam board, construction paper or poster board or a proper reflector. You can use one or many, depending on the type of photo and kind of light you want.

Reflectors are one of the hardest working but cheapest pieces of equipment you can have in your kit bag.  Here’s a short list of some of the things they can do:

If you look at the image above you can see the difference a reflector can make.  Neither image has any post processing other than adding my watermark.  Both were shot in the same location, just seconds apart.  You can see how using a reflector on the second image virtually eliminated shadows and made the whole photo feel lighter.

I chose to shoot in AV mode, which means I controlled the aperture, which I set at f3.2 for both of these.  I also set the exposure, which I bumped up to +2/3 and the camera chose the shutter speed.  Interestingly, my shutter speed was the same for both shots – normally it would differ a little bit.

But that makes this an even better example of how the exact same camera settings and scene composition can produce two very different photos by controlling your light sources with a reflector. (although, admittedly, I did move closer for the second shot.  Yes, move closer.  I was shooting with a 50mm prime lens which means if I want to zoom in, I have to move closer.)

So which shot is better?  Neither.  Each one has a different look and feel and it depends on your end goal and personal preference.  I honestly can’t decide which one I like better, which is why I saved these for a tips and tricks post instead of in the original cookie post!

Do I need a professional reflector?

No, not at all.  I used a piece of white foam board for this photo.  I have one that’s black on one side, white on the other.  $6.00 at Staples.  Need cheaper?  Use poster board – it’s not as sturdy but still works.  Or hang up a sheet, or try a mirror.

I do own a 5 in one reflector and it’s wonderful.  They cost in the neighbourhood of $20-$50 depending on the size you buy.   This one by Opteka

is very similar to mine.  The beauty of owning one of these is you get white, black, silver and gold all in one and a diffusor.  Diffused light is great for shooting food – especially if you have some really bright sunlight or harsh overhead light that needs toning down.

I used foam board for the shot because it was easier to stand up while I used the camera – I wasn’t using a tripod for this shot.  If I’d had the tripod, I’d probably have used my reflector.

Here you can see my setup.  Us photographers – we’re very glamorous. 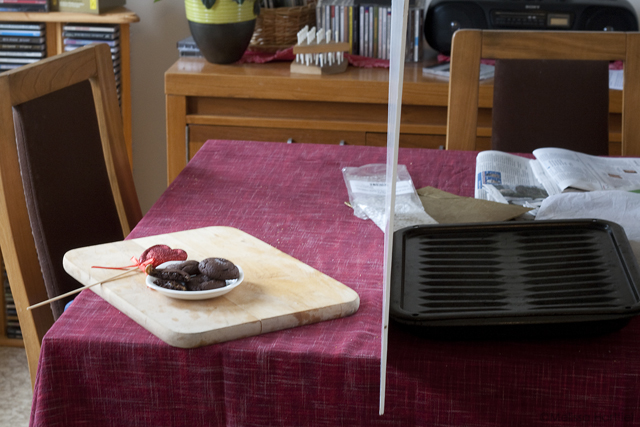 yeah... that's my broiler pan holding up the foam board - nothing but fancy shmancy at Studio Melissa

So, now that you know what a reflector can do, and how cheap they can be, especially with a little creativity, you have no excuse but to start experimenting with them!  Off you go!

Are you still here?  Why aren’t you reflecting?