What is a Japa Dog you may ask? Well actually lots of you already have so I decided to do a quick post about them.

If you’re a Vancouverite, you already know about these tasty takes on the traditional hot dog, but to people from outside the city, they sound, well… kinda weird!

So let’s back up a bit. I had a spare ticket to the Vancouver Canucks/Calgary Flames game last night so I had invited my friend and colleague, Dave, to come with me. Dave’s been wanting to try Japa Dog for a while and seeing as they only recently opened their first sit down outlet (the others are all street meat carts), just a few blocks from Rogers Arena (I hate saying Rogers Arena. Hate. It.), and because I love them so, it seemed like a great idea! 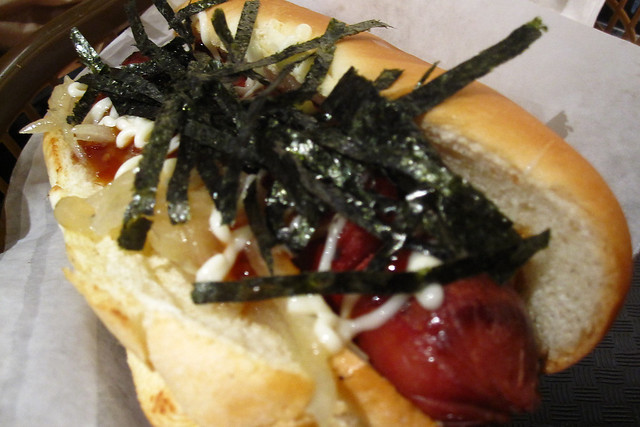 pork sausage, onions, teriyaki sauce, japanese mayo and shredded nori. I added some wasabi mayo after I took the photo

We had Teriyamo Combos (dog, fries and drink $8) which, from what I understand, is the original Japa Dog (although they have many other flavours I’m itching to try). And we both chose the terikayi fries for our fry choice.

The Teriyamo dog is a pork sausage slathered with fried onions, teriyaki sauce, Japanese mayo and shredded nori (seaweed). I added wasabi mayo to mine as well and Dave added sweet chili sauce too. It is like eating sushi, with no fish, on a hot dog. And it’s amazing.

The teriyaki fries are regular french fries sprinkled with a teriyaki seasoning salt and I have to figure out how to make this myself because it’s awesome. I thought they’d be fries covered in teriyaki sauce and be all soggy but nope… I’ve also had their nori fries and japanese sea salt fries but haven’t tried the butter fries yet. All very tasty! And totally not weird. Or a hippy west coast thing as one Ontario friend suggested! 😉

They are hoping to expand into the US this year according to their website but right now, you can only get these babies in Vancouver!  Here’s a nice little article on how they started out by the Globe & Mail. 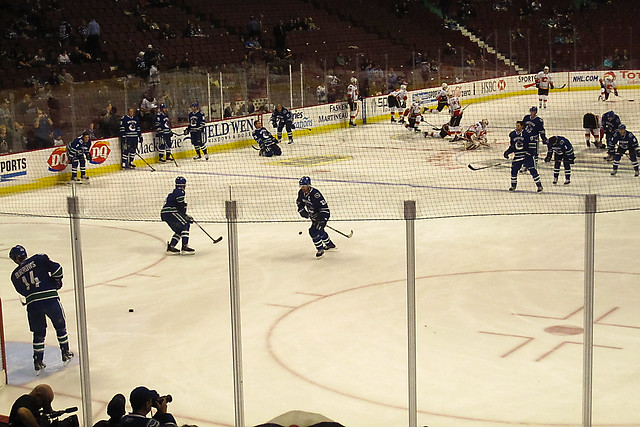 a little Henrik and Burrows action during warmup

For those who follow hockey, the game started off slow and badly played, despite a quick two goal lead by the Canucks.  The last two periods were much more exciting though!  Didn’t seem to have the usual zip that the Flames rivalry usually produces.

And in the grand Canuck tradition, they once again won while I was in the stands.  I have a very impressive track record.  I really should be given free tickets by the Canucks organization.  Yes indeedy!  hehe.

Both were taken with my Point and Shoot.

For the Japa Dog shot, I shot in P mode so I had more control. I shut off the flash and bumped up the ISO.  I forgot to switch to Macro mode so my focus isn’t quite what I wanted… photographer’s fault, not the camera.

As a tip when shooting food in a restaurant, turn off your flash if you can.  Bump up your ISO as high as you can without getting too much grain and improvise with the light and decor around you.  We were sitting on a bar stool with a good light source right in front of us so I only had to go to 400 and didn’t have any camera shake.  I could have rested my camera on the table or my purse if I needed something to steady it.  Flash will blow out your photo and it never looks great.