So, having said that, the three here represent the best of the 47 I took. 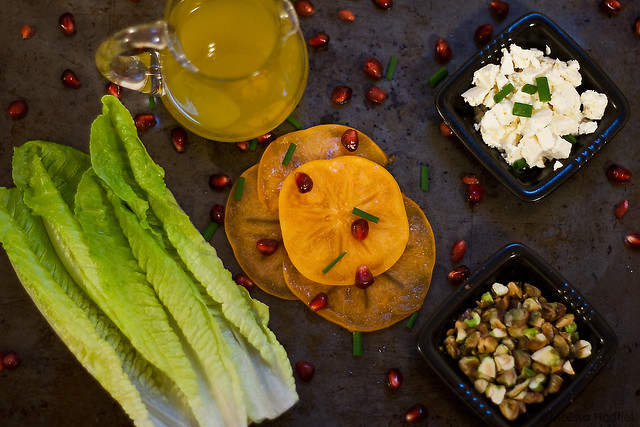 Ingredients for pomegranate and persimmon salad

The flip side of that is… the salad turned out scrummy-umptious.

I’ve been lusting after the Williams-Sonoma Cooking For Friends cookbook.  The photos in it are so divine.  But, I only had money to splurge on one cookbook last week and after having my two choices pulled out on the floor in the bookstore and comparing, I picked the one with the more mainstream ingredients (more on the one I chose in another post).

But while I was sitting cross-legged on the floor of Chapters comparing my books (am I the only person over the age of eight who does this in bookstores?), I came across the Endive and Persimmon Salad.  Seeing as I had the very first two persimmons I have ever bought sitting in my fridge without a clue what to do with them, I made a mental note. 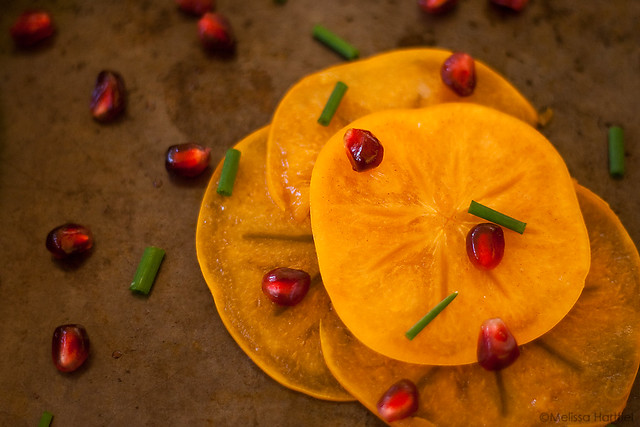 Sure enough, when I got home a quick google found me the salad recipe on the Williams-Sonoma site.  Follow the link and you can check out the original recipe.

What follows here is the Melissa-ized version.  And I will tell you why. 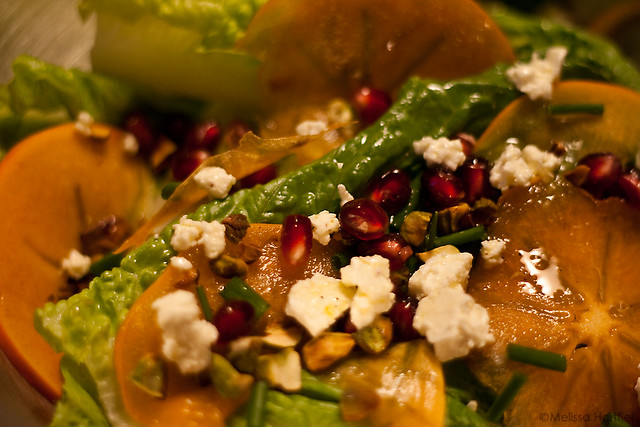 The finished product - and yes, there is, in fact, chicken hiding in there.

So, without further ado:  the Melissa version of the Endive Salad with Persimmons or as I like to call it:

Trim the ends off of the Romaine leaves if you don’t like them (I do so I keep them) and put them in a large bowl.

Slice the persimmons as thin as you can – use a mandoline if you have one.

Combine the cheese with the 1/2 tsp olive oil.  Add the cheese/oil mixture, pistachios, persimmons slices, pomegranate seeds and chives to the Romaine leaves.

In a small bowl combine remaining 1/2 cup of olive oil with lemon juice, lemon zest, wine vinegar with a whisk.  Once well combined season with salt and pepper.

Drizzle the oil over the salad and toss.  Add extra seasoning if needed.

I don’t like my salad drenched in dressing so I only used half the dressing for the salad and I cooked my chicken with the remaining half instead of cooking oil, which gave it a nice lemony tang.

Top the salad off with the warm chicken and serve.  You should have enough for four.