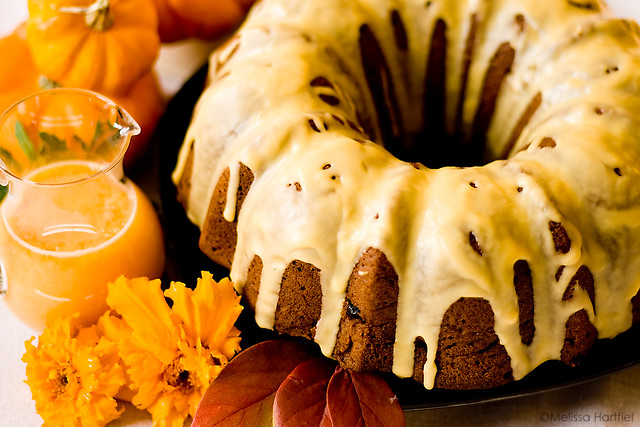 A lot of orange glaze!

I’m off to Thanksgiving dinner at my mom’s tonight (that would be Canadian Thanksgiving.  I’m not exceptionally organized or early, I’m just Canadian).  Seeing as she’s already making my favourite sour cream apple pie, which I should make and post one day, I offered to bring something pumpkin-y for dessert that was not pie.

So, disclosure notice:  I never make cake.  Ever.  I’m a cookie girl when it comes to baking.  However, I do love eating cake.  So I thought I’d give this a shot when my friend Christina mentioned a bundt cake as a pie alternative for pumpkin.  It sounded very easy and I loved the glaze.  However, as of writing this, I haven’t actually tasted the cake.

So, it looks good, smells good but, who knows… the whole thing could be a big disaster.  Maybe I used salt instead of sugar.  I’ll let you all know how it turns out. 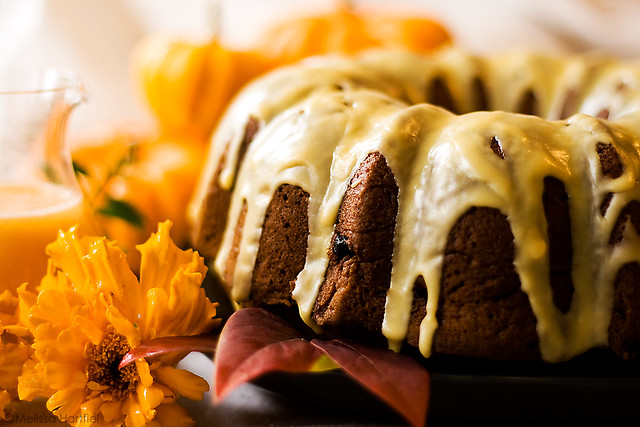 I used two recipes.  One for the cake, and one for the glaze.  The glaze recipe was part of a cake recipe but it called for cake mixes and I wanted to make this from scratch.

The glaze recipe made gobs of the stuff.  Way more than I could ever use.  In fact, that little glass pitcher with orange liquid in it in the photos is only some of the leftover glaze… there was more in the pan.

Shooting was harder than I thought.  I had to experiment a lot with white balance and my reflectors so that the glaze didn’t look washed out instead of orange.  But finding props was fun.  I had some mini pumpkins already and I stole some marigolds and blueberry bush leaves from the garden. 🙂

Glad I got some photos though, because I have no idea how I’m going to get it to my mom’s place looking like it does now… especially if it has to share the passenger seat with a 75lb lab puppy…

So without further ado… recipes

This recipe is adapted from foodpluspolitics – it was sooo easy to make.  I used dried cranberries instead of nuts and a 14oz can of real pumpkin.  I’m such a rebel.  I also omitted the powdered sugar dusting, because I was adding the glaze instead.

Preheat oven to 350 degrees. Grease and flour or spray a Bundt pan.

In a large bowl, whisk the 3 eggs until blended. Add pumpkin, oil and water. Whisk until smooth.

Pour into pan, bake 65 – 75 minutes or until a toothpick inserted near the center comes out clean.

This came from the food network.  Keep in mind it was meant for their cake recipe which I think made a bigger cake than mine.  It makes tons of the stuff.  I also didn’t have any orange liqueur so I added a touch more orange juice.  And the food colouring… well, lets just say, I used about 10 parts yellow to four parts red before I got anything even close to orange… However, here is their recipe… alter it as you see fit.  It’s pretty easy to do.

Combine 10 parts yellow food colouring to 4 parts red.  Whisk powdered sugar, and orange juice and  food colouring in a saucepan on low heat for 5 minutes or until sugar melts.

If the glaze seems too dry, add more water or orange juice to reach the right consistency.  Drizzle the glaze over the cake.