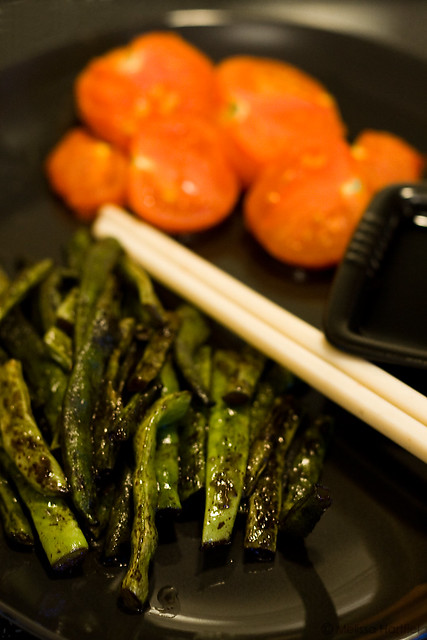 I’m single so cooking, for me, is always a challenge. Most recipes aren’t designed for one so unless I’m in the mood for endless leftovers or I want to freeze stuff, I have to muck around trying to figure out how to alter the ingredient amounts.

It doesn’t always work out the first few times.

This Sesame Green Beans recipe is a pretty good example. I love sesame beans and my beans plants are producing ridiculous amounts of the things so I’ve had lots of opportunity to work on getting it right.

The recipe I used as my base was this one from allrecipes.com. However, most days I really don’t need to cook a pound of green beans – more like a handful.

Oddly enough, the best version I’ve done of this, and also the one I wound up photographing, was one where I didn’t try to work out the amounts and instead just chucked in what looked right. See my highly unscientific onesie version of the allrecipes.com recipe at the end of the post. 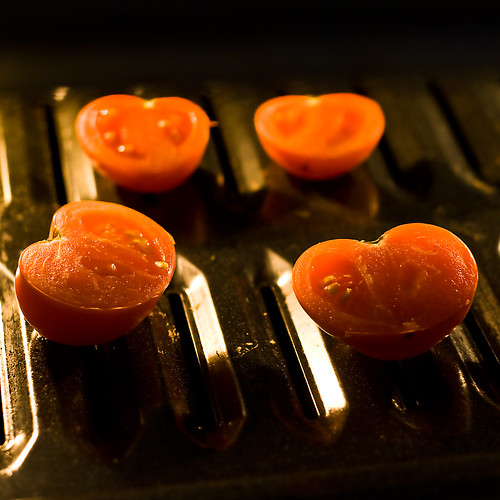 And what would it be without more tomatoes??

Fall is my favourite time of year, no question. So much good stuff coming out of the garden! And what would a post be without another way to use up all those tomatoes?? Seems this year so many people I know grew their own tomatoes and everyone is overwhelmed!

One of my favourite things to do, with both ripe and green tomatoes, is also so easy. Chop them in half, and stick them under the broiler. They’re great plain but even better if you dress them up with a dash of salt, pepper, maybe some basil or a little grated Paremsan, or try a dab of butter or a brush of olive oil. Let them brown up and get bubbly and then serve.

They’re great with dinner but I also love them, especially the green version, with a big, full, weekend breakfast – some bacon, and omelette or scrambled eggs, toast… mmmm.

So what did I eat my broiled tomatoes and sesame green beans with? Kraft dinner! (for real… those smushy warm tomatoes on top of KD cheese sauce?? mmmm… yeah I know… such a gourmet! haha)

Sesame Green Beans for One

Remember, I winged this based on the recipe above… all amounts are approximate!

1 handful of fresh green beans. I cut mine in half before cooking – mainly because I’m the world’s clumsiest eater and it’s less messy for me!
1 tsp of oil – olive or canola
1 tsp of sesame oil
3-4 dashes of soy sauce
1 sprinkle of toasted sesame seeds

Heat a wok or skillet to medium heat and add both oils.
Throw in the green beans and stir to coat with oil.
Let the beans cook till they are bright green, slightly brown in spots and crisp-tender. The trick here is the temperature of the pan. Too hot, and they’ll brown too fast and not be tender.
Remove from the heat and add the soy sauce – I really had to cut down on the soy sauce from the original recipe because I found it just overpowered the beans and sesame flavour.
Cover the pan and let the beans sit for a couple of minutes.
Sprinkle the sesame seeds over the beans just before serving. I also added a drop more sesame oil for a little more flavour.